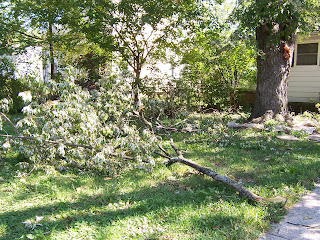 Since G'Owens On Round Here took the time to show you storm pictures, I thought I would do the same for my city. The storm damage has been pretty much cleaned up around here, and the city has been busy picking up all the tree debris. I did manage to get a couple of minor pictures for you today. There were whole uprooted trees, some fell on power lines, etc. These are tiny branches in comparison. We are asked to bundle things up. There were a lot of places still without electricity, and many school districts (not just particular schools) have cancelled classes even for today. Many of them announced very early - yesterday afternoon - that they were closed today, so apparently it has to do with more than just whether the electricity is back on. The only thing I can think of is the planning of the lunches. Maybe they wait to make sure the school can open before ordering lunches. I remember last year they took "snow days" for something other than snow, and they are doing it again so early in the year. It is such a beautiful day out today. 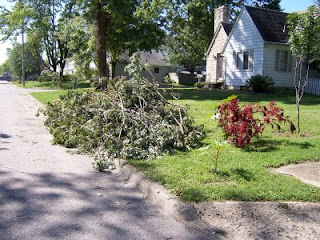 I am out of milk and I am afraid to go to the store to get some. I've been to a local grocery store when the power went out and I know for a fact that they do not have generators to keep their food cold. I would think that all grocery stores in areas where there are lots of trees would have generators as a rule, but apparently they do not. Many grocery stores were closed during the storm. Now I'm sure I will be able to buy milk and other perishables, but I wonder how long it had been sitting in an uncold environment.

I was passing time at the library yesterday before class started (because my classes aren't cancelled), and was browsing the new book section in the childrens' room. A lady was standing beside me looking at the section as well. She turned and started talking to me. It was my sister! When I am at the library, I am looking at books, not at people. I certainly hope that people who know me don't think I am deliberately ignoring them. I tend to do this a lot - not really looking at people - which in a way is a good thing, because people don't want to be stared at or looked at as they too are looking for books and videos, but on the other hand, if I do know them, they are going to feel slighted.
Posted by Shasta Matova at 11:59 AM

My husband and I were living in the U.S. Virgin Islands when Hugo came thru in 1989- we were out of power for 3 weeks, there was looting at stores and gas stations... A very scary time. My prayers are with you.

From your post I assume you are not in Houston. Good. I live a mere 3 hours from Houston and although boarded up ect, had NO effects from Ike. Relatives in Ohio had 70 mph winds! Go figure!

Hi Shasta,
I'm glad to here you are all alright! It looks like a beautiful day!! Hope you enjoyed the sun.
Karlie aka bearpicnic

Thanks for the comment to my blog :) Our (small) local grocery had refrigerated trucks come in and the meat and dairy stuff went in one and the freezer stuff in the other. Maybe yours did that too? I hope so I bet they had to follow guidelines. Is it a chain? Ours is a Food Giant. xoxo melzie

So thankful that you just had some branches down and the inconvenience of loss of power. These storms have been so devastating. My niece in Baton Rouge just got her power back this week from Gustav! The longest period I had was during Hurricane Andrew and it was only for six days. The worst thing I remember was not potable drinking water -- so no coffee! That was way back before we cold buy jugs of water at the market! LOL

Hmmm. My daughter who is still in your state didn't say a word about the hurricane and whether it affected her at school or not. Come to think of it she hasn't said a word about much at all lately. Glad you're okay.