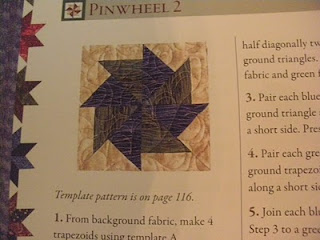 Kate has posted the third step of the stay at home robin today.  I wanted to do this quilt.  I still want to do the quilt.  I thought that I should hurry and catch up on the blocks, because I think that doing each step in a separate month would help give it that round robin flavor.  All the blocks would look different, because the decisions were made in separate months.

The first week's step is to make a 6 inch block.  I flipped through my Sylvia's Bridal Sampler quilt and chose a block.   The blocks in the book are smaller than 6 inches, but I figure I could add a sashing to bring it up to size. 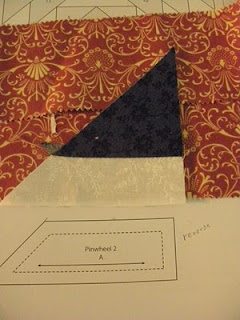 The directions are skimpy, but I studied the picture carefully and put my pieces together like a jigsaw puzzle to make sure I added all the parts in the right places.  It turns out that the template is reversed.  Maybe all templates are - it's been a while since I've sewn with templates. I sewed the triangles together so I was left with four squares.  Oops.   I can't make the block I set out to make. 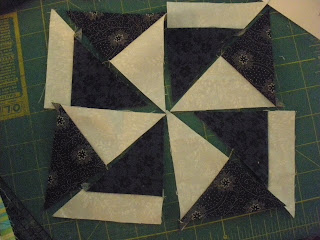 Before I bring out the seam ripper, I try to determine whether there has been a mistake that needs ripping, or whether it was simply an alternate design choice.  There were many times when I was making the Jane blocks where I wished I could play with alternate design choices.  I decided to play.  How can I position these pieces where the resulting design looks intentional?

Like the four patch posie, I twisted the pieces around and around, and found several pleasing designs.  I've decided to run with this, and make some more blocks.

I'm not sure whether these will wind up in the round robin quilt, because they won't look like a different person made each block.  But I guess it wouldn't hurt to have some orphan blocks laying around.  Or maybe I'll make another doll quilt, using the same layout as my last one. 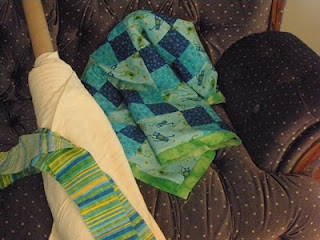 In other quilting news, I have finished making all of the tops for the Quilts for Kids quilts.  I am hoping to get them sandwiched and quilted soon.
Posted by Shasta Matova at 10:29 AM

Who was it said there are no mistakes, just design opportunities? Sounds good to me! How many tops for kids did you make? The one on your chair is SO pretty!

yea
I applaud you for working outside the box!
I can't wait to see what you end up doing with it.
orphan blocks are always a good thing to have :)