Our electricity was out a couple of days ago.  This happens from time to time so I figured it was a squirrel that got to a wire or some such issue, and the electricity would be back soon.  I managed to get ready and have breakfast without electricity without issue.

Zeus and I walked around the neighborhood and everything seemed normal.  I checked in with the electric company with my cell phone and it looked like a huge area of my side of town, as well as several other areas in the city were without electricity. 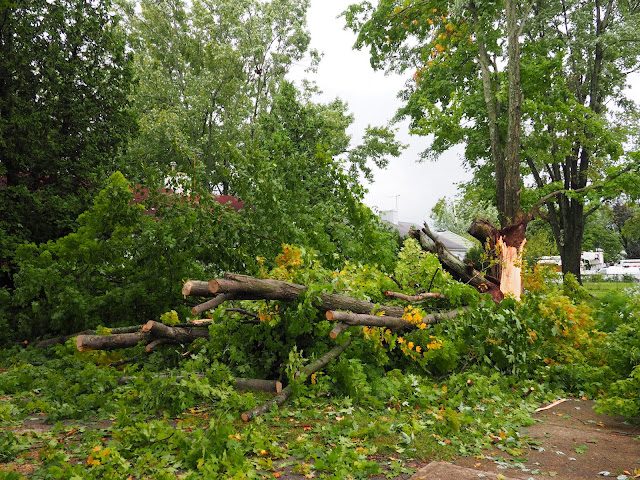 I then got a text to walk further north.  Wow.  Normally, my wandering camera post would have shown summer flowers, but all of my photos for this month were taken a couple of days ago. 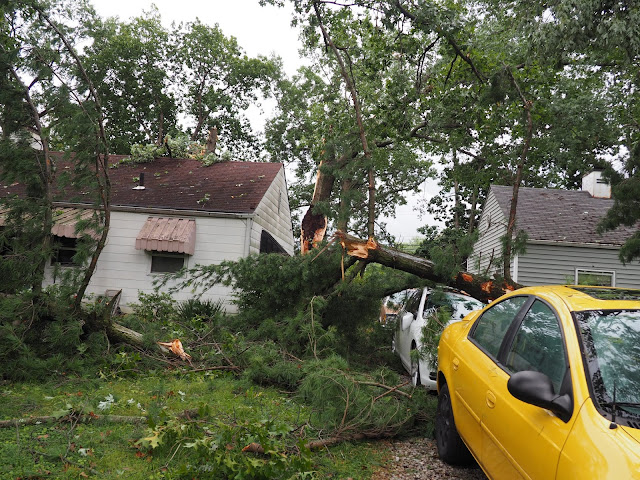 At six o'clock in the morning, a big burst of wind went down this neighborhood, knocking down branches and even huge trees. These trees fell on cars, houses, and power lines. There were several blocks that were affected. 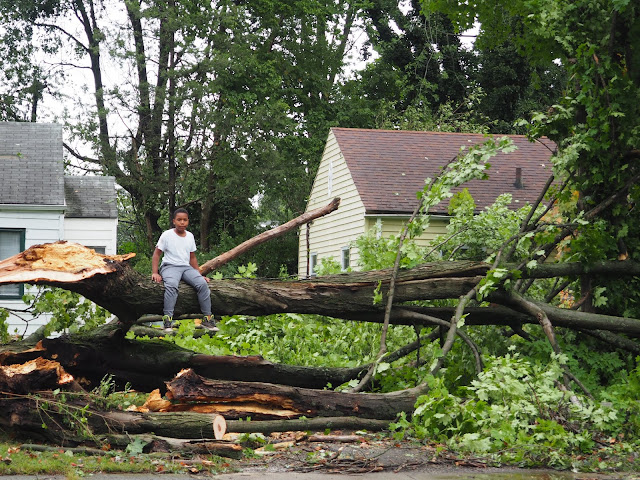 House after house had signs of damage. This big tree went across both yards.  There were many trucks in the area cleaning up debris and cutting down the broken branches.  As you can see, a lot of the branches on this tree has already been trimmed. 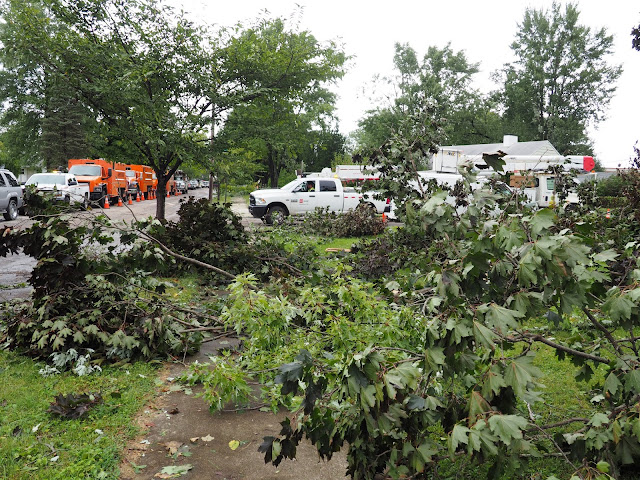 Here you can see yards and sidewalks filled with branches, and in the back rows of trucks of the people helping with the storm damage. 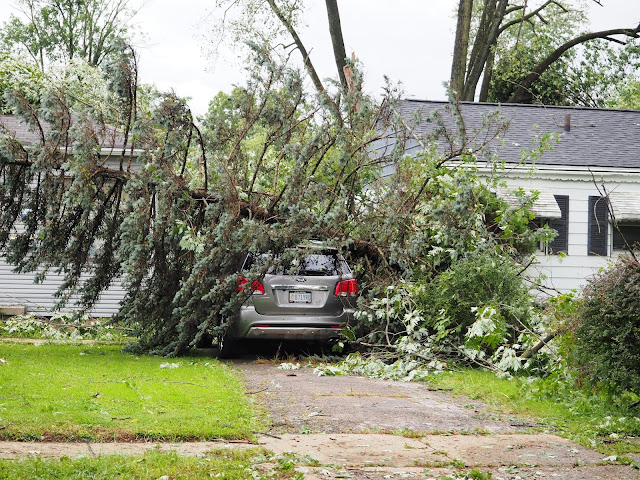 The storm lasted just a few minutes, maybe five or ten minutes That's a lot of damage in such a short amount of time. 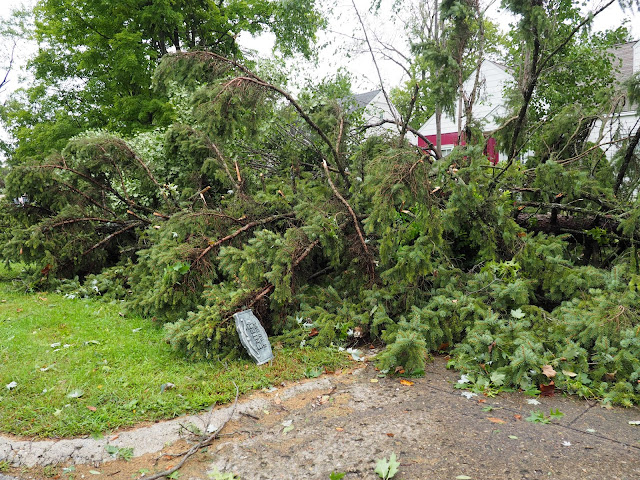 This tree is covering the driveway. 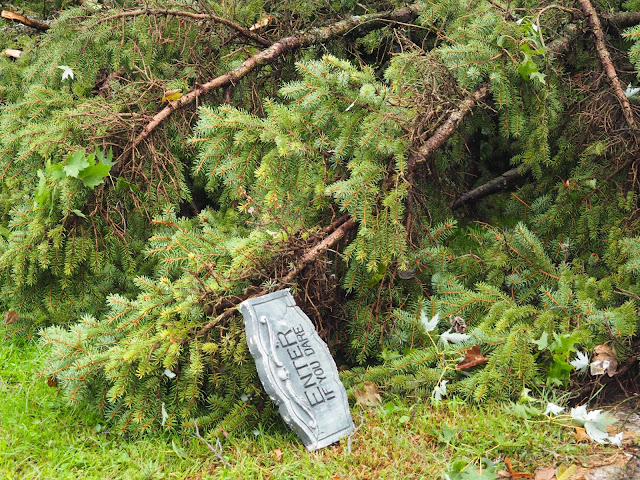 Here's a closeup of the sign by the driveway. I'm pretty sure that is not what they meant by that sign. 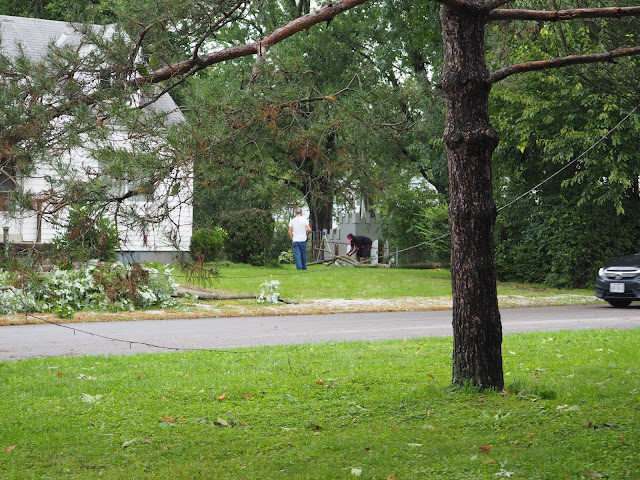 Here you can see some downed lines on both sides of the street. 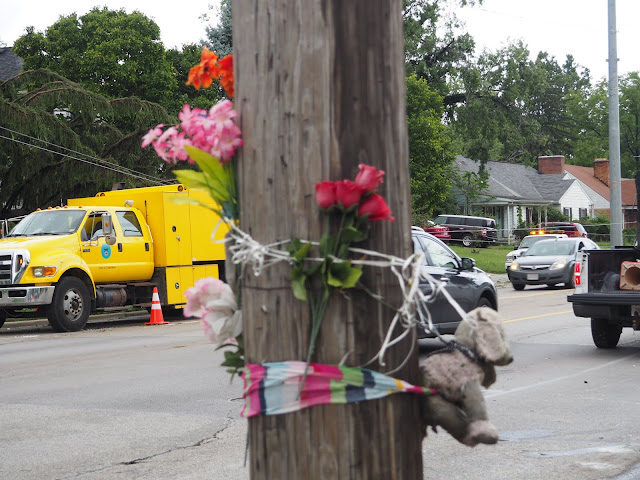 Since I was not prepared for this photo opportunity, my camera ran out of battery. This was the last photo. In front you see a memorial for a child who died at this intersection a few years ago. The memorial is refreshed from time to time.  Behind that is a city truck and behind that is the big power line that was downed and probably the cause of the outage.  Even though this is a main busy street, I'm really surprised they kept this street open for cars to drive on. 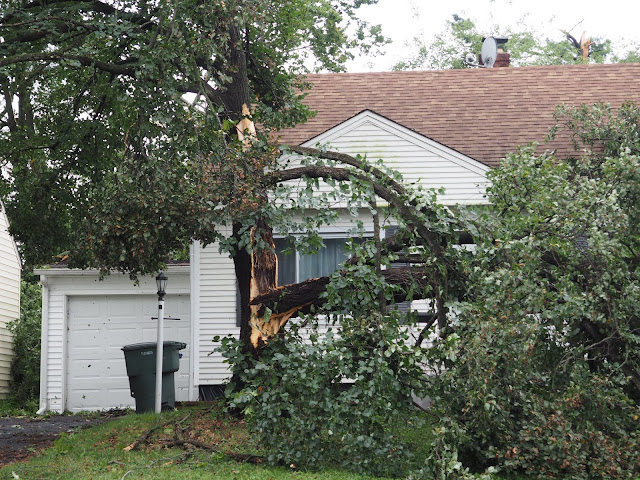 When I got back, the power was up, which is amazingly quick due to the amount of damage. The National Weather Service has declared this event to be a tornado.

Linked to:
Wandering Camera
Posted by Shasta Matova at 11:41 AM

What county are you in? Glad you only lost power! We have had huge amounts of rain the last few days but not the high winds other areas had.

Oh my goodness, that's a lot of damage. I hope no one was hurt and that everything gets put right quickly.

Looks like here - we had 3 tornadoes the other day. My hubby was out working on my car, putting in new shocks during it, lol. I slept right through it! We never lost power, which is amazing since we always lose power - so many big trees. I'm thankful nobody was hurt.

A lot of damage in such a short time....
Hugz

Oh my. That does look bad. I hope everyone is okay, and that the cleanup and power restoration goes quickly.
We had the warnings for two separate days but it bypassed us.

Hi Shasta, I'm glad that your home and property were sparred. There seems to be a lot of tornadoes going around this fall.

Sometimes these 'micro-burst' tornadoes are more destructive than a conventional tornado because they pack so much power. We had something similar in a Cleveland suburb a few years ago, and it was bizarre seeing such dramatic damage concentrated in a very small area. I hope the folks that were affected are safe and getting their lives back together.

That's a lot of damage! Must have been a pretty compact, but powerful tornado.

So much damage in such a short time! Is always sad to see so many trees broken and down. We get the same here sometimes in stormy weather. Happy to hear there was no damage in your place.

Oh, my! Our house was hit by a tornado nine years ago and when I tried to open the front door, the oak tree from the front yard was in it! Straight line winds can do as much damage to trees as a tornado. Glad you were safe and didn't have to deal with the carnage.

We had a storm go through here like that around the same time. A huge elm tree fell into part of my flower garden. I now own my own small battery operated chain saw. Out here in the country we seem to have a lot of storms like that and downed trees and power outages.

Oh my goodness! So much destruction in such a short time! I am happy to hear that you were unaffected by the tornado. The photo of the memorial is incredibly sad, a reminder for driving slowly on the neighbourhood streets. Glad it survived the storm.

Thank you so much for linking up on Wandering Camera.

Oh my gosh! Nature can be a terror. My best wishes to you and your community.

Wow, on both sides of the world we are having storms and trees are falling every which way! That is a very ironic sign... Enter if you dare!