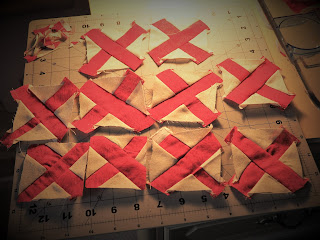 I heard about the 70273 project a long time ago. I tried to search for it on my blog to see when I talked about it, but I can't find it. In short, it is a quilt project to commemorate the  70,273 physically and mentally disabled people – men, women, teens, boys, and girls – were killed by the Nazis between January 1940 and August 1941. It takes two X's to make one block and each XX block represents one person, since it took two doctor's marks to carry through the execution. The goal is to have 70,273 blocks made and put into quilts to commemorate each of the individuals.

I have been meaning to make some blocks for this project for a long time.

Since all of my fabric has been put away for the Thanksgiving gathering, and I had just bought some basic fabric which included red and white, I decided to make some blocks. I am making them improv style. I just cut a strip of white and two strips of red to see how many blocks it would make. I need to trim and press these X's and then put them together into blocks before sending them to be put into quilts. Because it is a big project, my initial goal was to make a large number of blocks, maybe even a small quilt, but I think that is what made me take so long to make the blocks. Now I figure I will make whatever contribution I can make now, since I can always make more in the future. 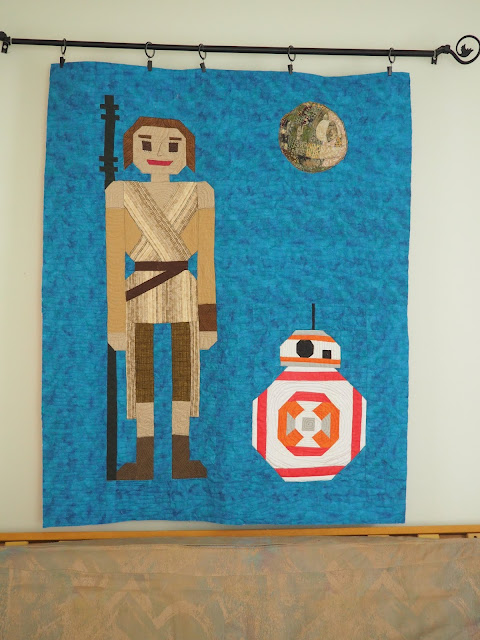 The Droid quilt is still not bound, but I put it up on the wall anyway for the gathering, and nobody noticed that it wasn't bound until I told them. It will get done once I am finished with the XX blocks.
Posted by Shasta Matova at 9:54 AM