Many More Additions to the Quote Quilt

I think I should get the quote quilt top done close to the end of this quarter so I have time to get a backing. There won't be a lot of quilting but I will have to tack it down, probably by hand, and then bind it. I want to leave myself plenty of time to do that because it always takes longer to do than I think it should. 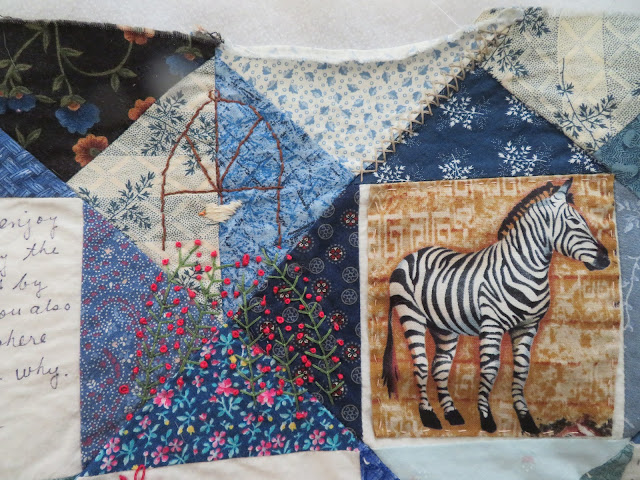 The zebra is from fabric that I have been saving for Elephant Parade's backing. It will need to be pieced anyway so I don't mind "borrowing" it. I was nervous the whole time I was adding it though. It doesn't use colors that I have been using on the quilt and it is at the top of the quilt, so it could dramatically influence the mood of the quilt.  Did you notice that it is covering up a (duplicate) quote? It is probably not enough to make a difference, but at least you don't automatically think of the traditional quilt layout if you start looking at the quilt. As I tucked under the edges, it took a more reasonable proportion and now I like it.

I also added all those french knots to the fern on the left. Sure ferns have berries. The ferns didn't have a lot of contrast against the blue and now it holds its own attention better.I am going to outline the little bird so it has more definition.

Barbara Brackman recently shared a post with crazy quilts with portraits and animals if you are interested. 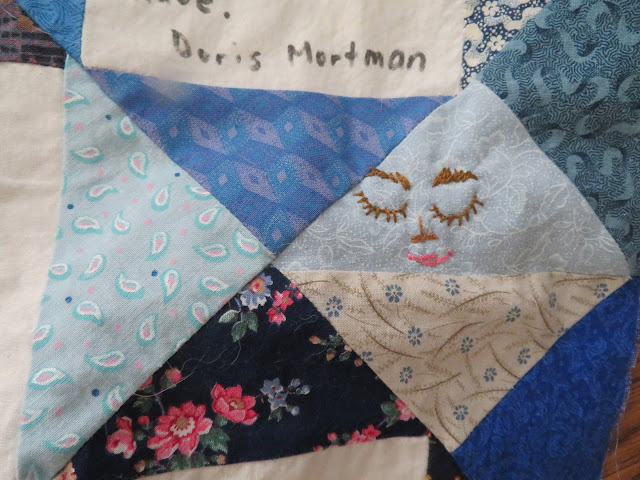 A random, I feel like adding a face here. 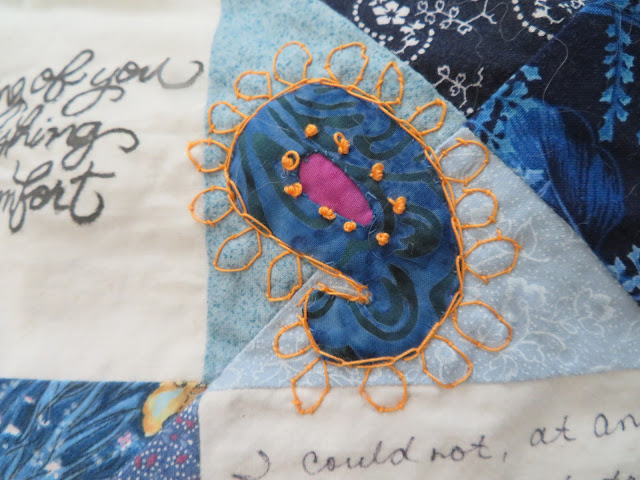 With all the new impulse additions I have been making, I decided I'd better look at the existing plans before I run out of space. This paisley was one of the drawings I had made.  The center is reverse applique, which I haven't done yet on this quilt.  Those french knots, messy as they are, got me started on all the french knots I have in the fern picture. 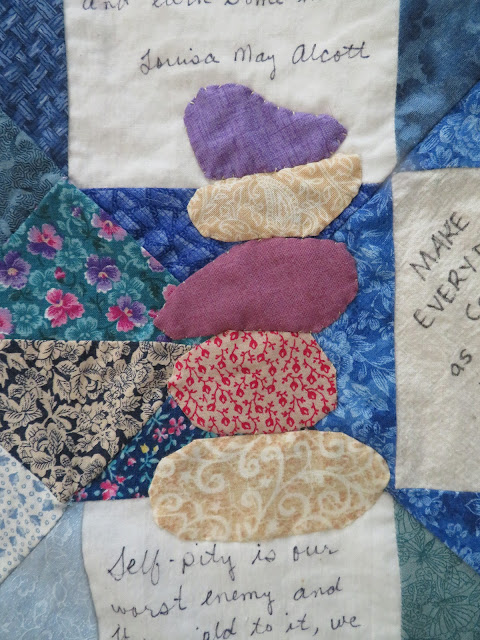 This was another planned one.  I'm not sure if these stones would stay in place in real life, so they may not be as calming as they should be.  I have resisted the urge to add words to them. 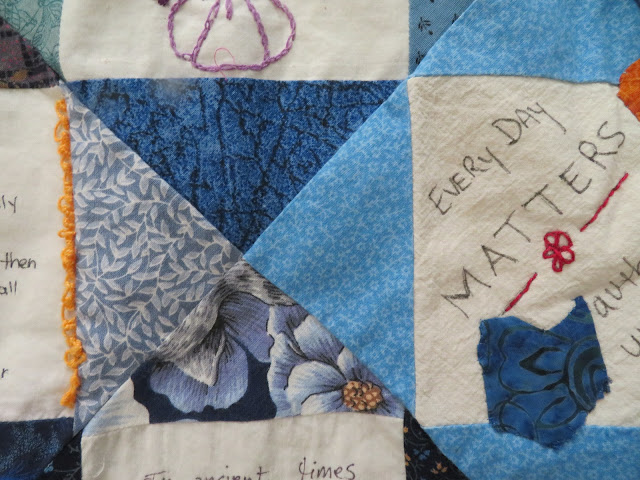 These are just little bits and I may add more at some point. I added Ohio on the right. It is a pattern from Doodle Stitching. I probably should have embroidered it because it is hard to applique tiny wavy lines. The yellow on the left is from a tutorial of the Roll Chain Stitch Queenie has on her blog. My rendition is horrible, but hey it is a new stitch and adds a little touch of color to the quilt. 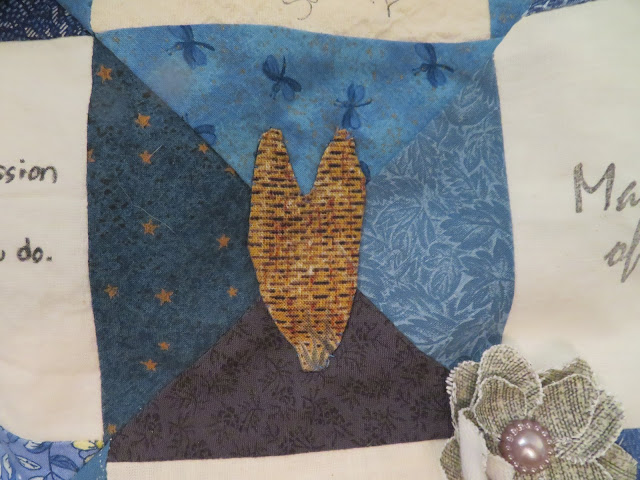 This fabric is from the zebra print. It would have been a good vase or basket, but it was tall and skinny and I decided to keep it simple. It was a collage, and I cut it up and added it in different places on this quilt. A de-collage and re-collage. 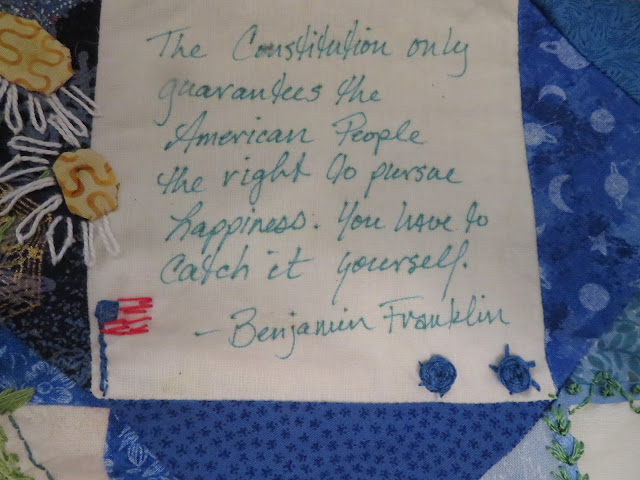 I added the flag and the spider wheel buttons. The buttons are from a tutorial from Aimee Ray's blog. She made hers into roses. 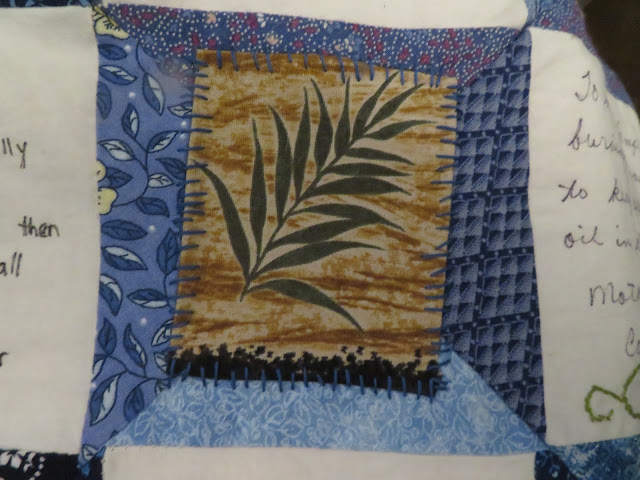 This is also from the fabric with the zebra. There were a couple of smaller ones too.  They were all pretty quick to add. I felt like the bottom of the quilt had more applique and the top had more embroidery, so these bits help add that balance. The idea to use this type of stitch instead of blind hem came from the crazy quilt video I showed you recently. 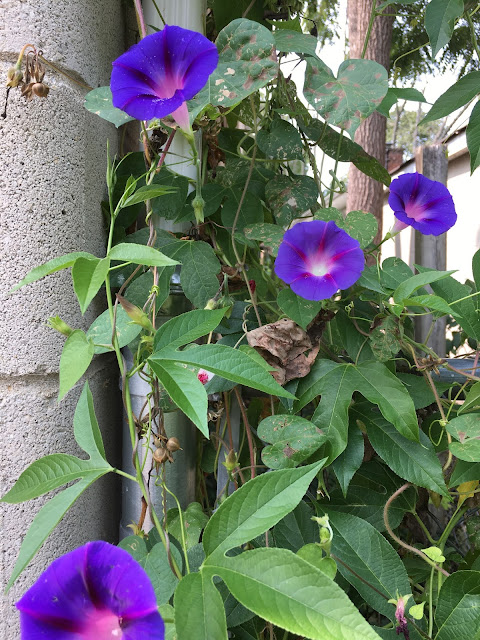 I spent more than fifteen minutes a day on stitching. Too bad, I can't go back and change my numbers for previous weeks. I did make up a bunch of time. 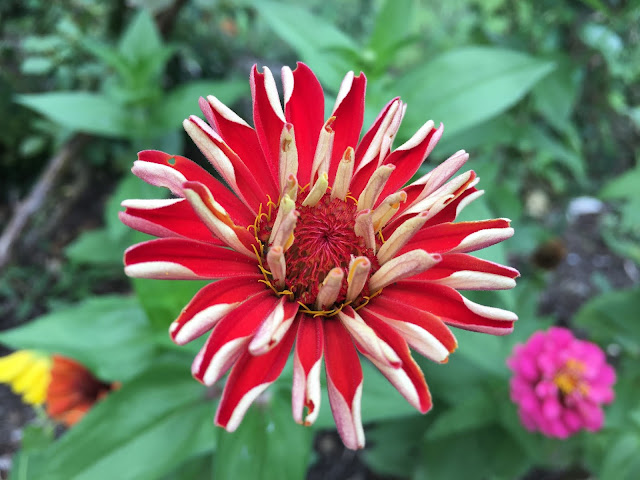 I love your quote quilt. It is a fun project that I'm sure you will enjoy for a long time.

You have really added a lot to your quote quilt. How big is it? Will it hang on a wall so anyone could go up and read it that way?

this is just a lovely quote quilt--It will be such fun to read them all--I love the embroidery additions..and sure, ferns can have berries--they really add a nice touch..
hugs, Julierose

Hi,
Great additions to your quilt. It will be
beautiful when done...have a great day!

It's so fun to see what ideas you come up with each time. I love the face.

Your embroidered additions are all so sweet! especially the smiling face :)

You could embroider or applique a big wonky flower coming out of your vase. I also think the rocks look like a walking path from one quote to another one. You could use that idea more to link the quotes together for the viewer to visually walk to them. (I haven't seen the whole quilt yet so I'm unsure if this would work but it might!)

All your additions are another bit of interest and inspiration. It will be interesting to see the whole quilt.

You are getting so much done and I really like the added color in your zebra block and plant block!

You've made some fun additions to the quote quilt. I like the zebra and the paisley, very fun additions. Hope this week has been as good on the stitching front as last week was. I think you appropriately applied the rounding rules for this week's post. Have a great weekend.

I so enjoyed every tiny detail! The flowers are amazing!

I see parts of this quilt but I'm eager to see all of it as a whole. It's looks like a quilt I would pour over and takes lots of time to view. Fun and interesting.