As I mentioned in my last post, I decided we were going to plan our own trip.  The preplanning process involved reading lots of reviews and ideas on the internet.  I don't know how we managed to survive without the internet.  I thought at first that Naples would be the best place to stay for our Pompeii trip, but all of the reviews of the Naples hotels said it was a seedy area, and recommended one of the resorts - Sorrento kept coming up a lot. Most of the resorts are on cliffsides, and many tourists complained about having to walk up the hills (or taking a bus) to get to their hotels.  I was happy to find a hotel in Sorrento that was on the main level (no hill) that had a price that was comparable to staying in the Naples hotel.  I reserved it as soon as I found it, because I wanted to get it while there were still rooms available. I emailed them to ask them how to get to the hotel, and they said that a shuttle bus was the best option.


We left in the afternoon on Day 1 (Tuesday, July 5), spent the night on a plane (where they played movies all night), and arrived in Venice the next morning.  The picture shows the car with a sign "follow me" that leads the plane to its destination.  We have to take a shuttle bus from where the plane lands to where we are supposed to be going.  We saw the "Transfers sign" so we went there.  There is a line for people transferring planes.  It is strange, because they find your name on a list they are holding.  The wimpy man finds the names of all of the people in the line, and only then does he let everyone through.  But there is someone yelling at him, because they don't want to go through this process, so he has to deal with that.  Then he lets us through the door, but doesn't tell us where to go.  We have to go through the "Passport" queue to get our passports stamped. Then it is back to the bus that takes you to the plane.   It is a short plane trip from Venice to Naples, and we arrive in the afternoon on Day 2.  We quickly get our luggage and found the bus that would take us to the hotel. It was running late, so it was still there, we were able to catch it right away, instead of having to wait an hour for the next one.  You could see from the shuttle several things - dirty, graffiti filled buildings, winding streets, beautiful sea views, and a pink / purple flower that seemed to be on many buildings.  The flower looks like it doesn't take up much yard space, but then has very big beautiful showy blooms (see picture above).  They say it takes an hour to get to Sorrento (but we didn't time it).  The shuttle made several stops, without announcements, so we weren't sure where we were supposed to get off, but luckily I asked early enough to get off at the Sorrento stop.


The itinerary for Day 2 was to get to the Ulisse hotel,  rest, recover from jet lag (which we did not have), and look around Sorrento.  The shuttle stop is on the main square in Sorrento.  The hotel said it was a short walk (maybe 10 minutes).  The shuttle driver said it was maybe 20 minutes.  We had packed light, knowing we would be using public transportation. The hotel had not provided directions (one of the reviews said there were signs).  The shuttle driver pointed in the general direction, and said go straight and turn right, so we headed off, walking.  It was hot, we were rolling luggage on narrow uneven sidewalks crowded with people and tourists.  My daughter was cranky, and wanted to get there right away.  I was walking too slow for her.  We got lost (we turned right way too early), and asked for directions at a different hotel. It was a nice hotel, and they gave us a map, and told us how to get back to the main street.  The map was very nice - it had a train schedule on the back.  We got to the main street fine (Corso Italia), and asked someone else.  They told us to keep going, and go down the steps after the hospital.  We went down the wrong set of steps. There was a man at the bottom of the steps, and it seemed like he said he would help, but then he wasn't doing anything, and he looked scary, so we went back up the steps (with luggage), and found another set of steps and tried them.  They were the right steps.  We had to walk downhill down the small street.  We were about to walk up to the parking lot where a sign with the hotel name was, but they waved us down the hill. The hotel was below the parking lot. Note to self, next time you book a hotel, make sure you figure out how to pronounce the name before you go asking everyone for directions!

It is a good hotel - clean and spacious. There is a view of the hospital and the cliffside behind it.  The hotel doesn't have good sea side views, and does not have a swimming pool.  These things were not important to me, because I thought we should spend time outside of the hotel instead of in it.    We had booked two twin beds, but they gave us a twin and a double bed.  We took a nap, and then looked around Sorrento.  We went back to the hotel to go to the restaurant the hotel recommended for dinner.  It was on the outskirts of town.  A driver would take us there and back.  So we went to Tarvernetta.  We were the only customers, which was very strange, but the food was good.  I knew that Italians eat in courses, but that seemed like way too much food, so I ordered the second course (roasted chicken) with a side salad.  The food was good, and we relaxed and ate on the patio (no view, but it was nicely set up with flowers.) We went back to the hotel and went to sleep.
Posted by Shasta Matova at 11:09 AM 3 comments: 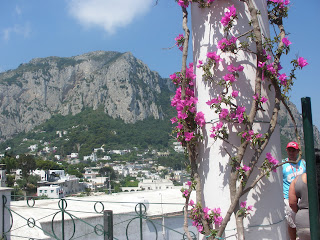 When my daughter graduated from college a couple of months ago, I told her I would take her on a trip of her choice.  She asked me about the fine print and limits, exclusions, etc.  I told her it would depend on if I wanted to go to the same place she wanted to go.  She gave me a hint - volcano.  Specifically she wanted to go to Pompeii, yes, the one in Italy.  And since it was something I wanted to do as well, I could not veto the suggestion!

I decided that it would be better to plan our own itinerary instead of choosing a package tour - in order to give ourselves as much time as we wanted to see Pompeii.  I also decided to stay in one place and really get to know it instead of trying to do a whirlwind tour through Europe, or Italy even, and spend more time travelling than actually seeing the sights. This plan worked out very well for us. 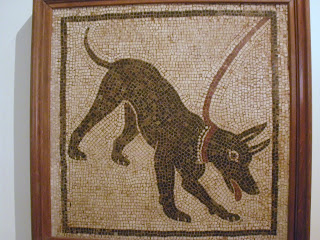 I was very busy at work, and in the evenings, I planned the trip. It did not seem real that I was actually planning a trip to Italy.  We don't vacation much - mostly day trips here and there, so this is a very big deal for us.

It was hard to time the trip well - I didn't want to go when it was too hot, but needed to wait for her to graduate, and my peak work time to be finished, try to be back before our Japanese guest arrived, and choose economical travel times, etc. 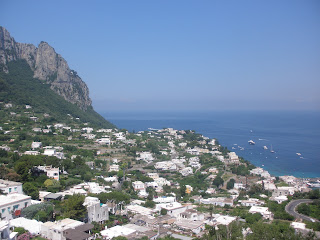 So we went.  To Italy!    Just me and my daughter.  As you can see, it is a gorgeous place. We took lots of pictures and had a great time.  I'll share some more pictures in a future post.
Posted by Shasta Matova at 4:21 PM 3 comments:

We are the Quilters 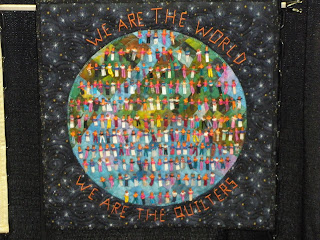 This quilt got me singing the song, and it added a great visual to it.  All the quilters are tiny little dolls, if I remember correctly.
Posted by Shasta Matova at 6:45 AM 2 comments: 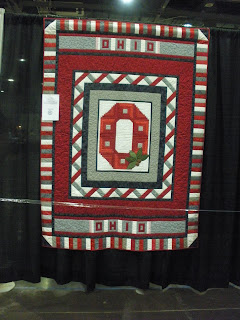 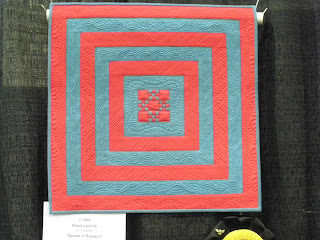 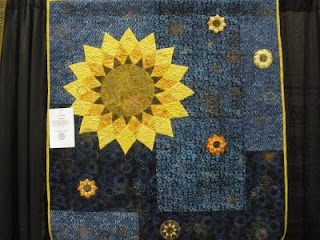 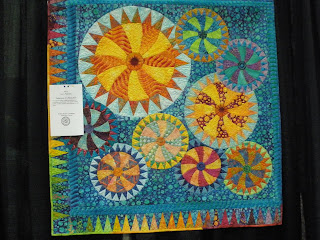 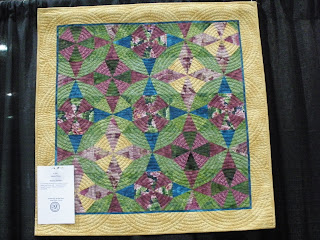 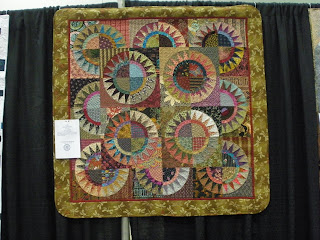 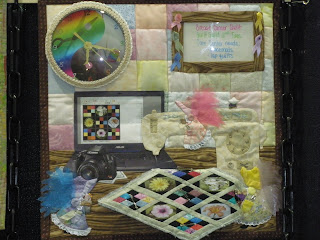 I took this picture at the NQA quilt show in June 2011.  I like all the detail and dimension on it.
Posted by Shasta Matova at 9:43 AM 2 comments: 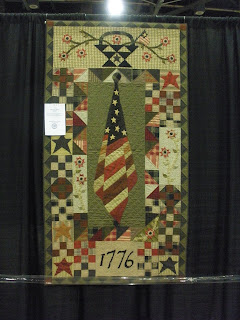 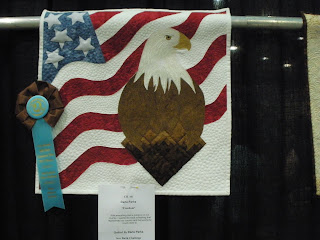 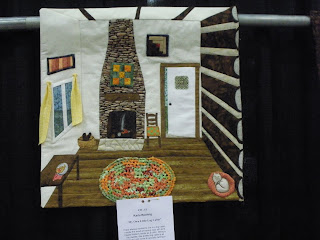 Another picture from the NQA quilt show held this June.  I especially liked this one for all the detail and texture that is put in this little quilt.  It looks so cozy there.
Posted by Shasta Matova at 9:50 AM 2 comments: This is another quilt from the NQA quilt show. Did you notice that it has the circle kaleidoscope that I had been planning to make last year or maybe even earlier? 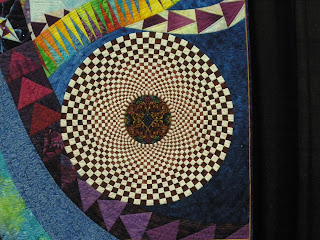 Detail shot. I think a quilt like this is way above my skill level, but I would like to try to make it to see how far I can stretch. 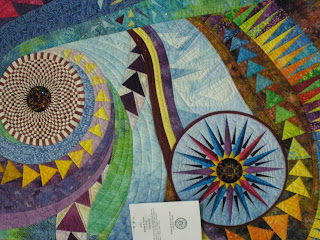 Another detail shot. It is turned the wrong way. I asked several vendors if they had a wedge ruler to make such a thing, and they said no.  I will have to look for one online.

I have been horrible about posting regularly lately, and am working on scheduling some posts to keep the postings more regular. And to share the so many pictures I took during the show.  I figure I can always add words to the pictures on days that I do get around to posting.
Posted by Shasta Matova at 9:07 AM 2 comments: