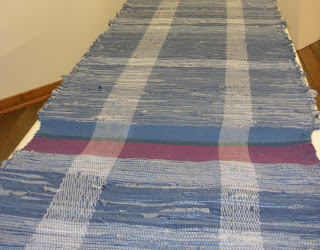 I have finished weaving the denim rug!  I actually had enough extra thread that I also made a smaller rug.  I just have to wash it and hem the binding, and I will be finished!  Somehow everything worked just right last night.  I had cut a bunch of strips, and didn't want to cut too many, so I took the remaining pant leg, uncut just in case. It turned out that I did need to cut the pant leg, but it means that I used up all of the jeans.  I also ran out of the thread I was adding with the denim strips, and the binding thread, so I didn't have anything extra of anything.  Then, when I paid the teacher for the thread I used ($10), it turned out that between my sister and I, we both had just enough dollars to pay in cash. 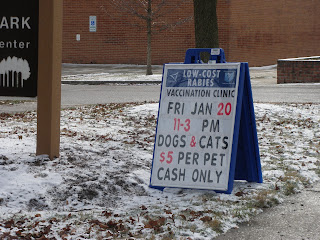 It was time to renew the dog license, and the renewal of the dog license requires that the rabies vaccination is up to date.  I called my vet to make an appointment.  I asked the receptionist what other vaccines he needed, and she said it was just that one.  I knew that the city offers a clinic for cheap ($5) vaccines, so I cancelled the vet appointment, and went to the clinic instead.    The city offers the cheap vaccines a few times a year (4?) at different places around town.  The one in January was farther away than other clinics, but I couldn't wait for that one since that is in the fall.

I wasn't sure of the best time to go - whether it was better to come earlier than the appointed time to wait in line, etc. - but the instructions were simple and clear.  I drove there after our walk, and went around the building.  There was a line of people with their dogs, so I just waited behind them. The line went down one end of the building, but it was moving pretty quickly.  Someone came out to see the size of the line, and told us that there was only one vet in the morning, but there would be two vets in the afternoon, which seems strange, considering that the clinic was only for a total of four hours.  Some of the dogs were nervous, so Zeus was also nervous.  He was shaking, but otherwise was well mannered.  It was cold waiting outside, but I had dressed for the weather so I was fine.

We finally got into the building, and it seems that the line inside was as long as it was outside, but it was still moving pretty fast.  They checked the current tags, and gave him new ones.  Another table took the $5.  As we were walking by what looked like a window to the kitchen area, there was a worker who was holding her hand.  I wondered if she had been bit.

I walked up to the table where the they gave the vaccine, and they told us to come behind the table, where they were.  I told Zeus to sit down, but then there were no further directions, so I got up to see what happened to the vet.  Zeus walked under the table.  He wasn't pulling on the leash. The vet said "get control of your dog!"  I thought that was strange because the dog wasn't doing anything bad, and neither of us had any direction on what he really needed to be doing.  I asked Zeus to come and sit again.  At that time, the vet got angry again that we were now in his way, because he wanted to take something to the kitchen.  He said "Fine, I'll go around,"  and went the other way. The other worker stayed and she told me what side effects to look for, and she was nice.   So we waited a few minutes for him to come back, and when he came back he said "Your dog is nervous."  I stayed calm and said "Yes he is."  Of course the dog is nervous.  The other worker told me to talk to the dog, but not touch him.  I knelt and talked to him.  The vet was kneeling down but then he stood up.  I said, "Are you done?"  He said yes.

I am hoping that the vet's attitude and irritation had to do with the fact that one of the workers had gotten bit, and not a regular part of his demeanor.  I am just glad that my vet doesn't treat me and my dog like that.

The booth for the city auditor was also there, so it was convenient to renew the dog license while we were there.

It only took an hour from start to finish at the clinic, to get the shot and the license.  I think it was worth it regardless of the treatment from the vet. 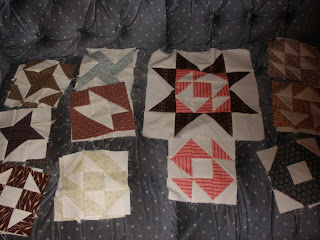 Block of the Month

I just need to redo the quarter square triangles - the centers.  I have also lost one of my blocks.  I am making stars around the blocks, and hopefully by the time I have made the stars,  I will have found the missing block.  If not, I will make them with fabric I have at home.
Posted by Shasta Matova at 10:06 AM 3 comments:

Email ThisBlogThis!Share to TwitterShare to FacebookShare to Pinterest
Labels: block of the month, quilting, weaving, Zeus

I know it is January, and by now I should be sick and tired of snow, but we had our first significant snow fall of the season. I don't like driving in snow, so I am happy it waited this long. 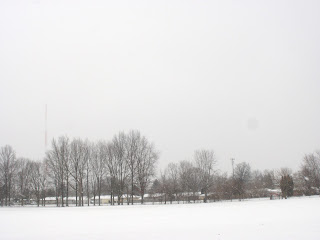 It was just a few inches, but it does cover up the ground quite nicely. 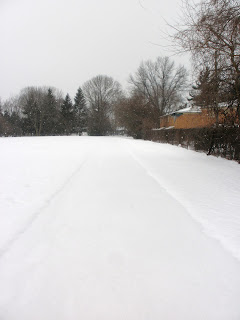 Zeus and I even got a chance to make our own footprints, although he doesn't stay on the path. 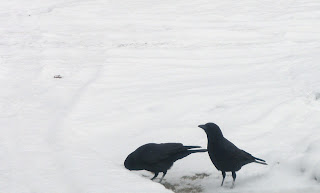 We met these two on the way back.  One of them even posed for me.
Posted by Shasta Matova at 2:23 PM 1 comment: