I am a slow quilter - just methodically working a few minutes a day here and there and making slow progress.  This means that my blog rarely has a final ta-da Here's the Quilt I Made Today posts.  What it is supposed to have is some in progress shots to show what has been happening so you can see the quilt unfolding over time.

Recently,  I started a new quilt, and I couldn't show that one to you either!  This time it was because I couldn't transfer the photos from my camera to my computer. So instead of slowly seeing the unfolding, you can see all of the photos at once.   My job sent me to Lansing for a month. I like to think that the hotel cleaning staff enjoyed seeing the quilt progressing, but I hardly saw them, and when I did, they didn't mention it.  I was working crazy hours at work, and just had a few minutes here and there to work on the quilt in the hotel room, but over the month, I think I made pretty good progress.

It all started with a fabric from a kit and a photograph in the quilt shop brochure.   They were teaching a class on it.  I also had a template from a book I got from the library.  A kit was faster to pack then trying to figure out what make and whether I had everything I needed. 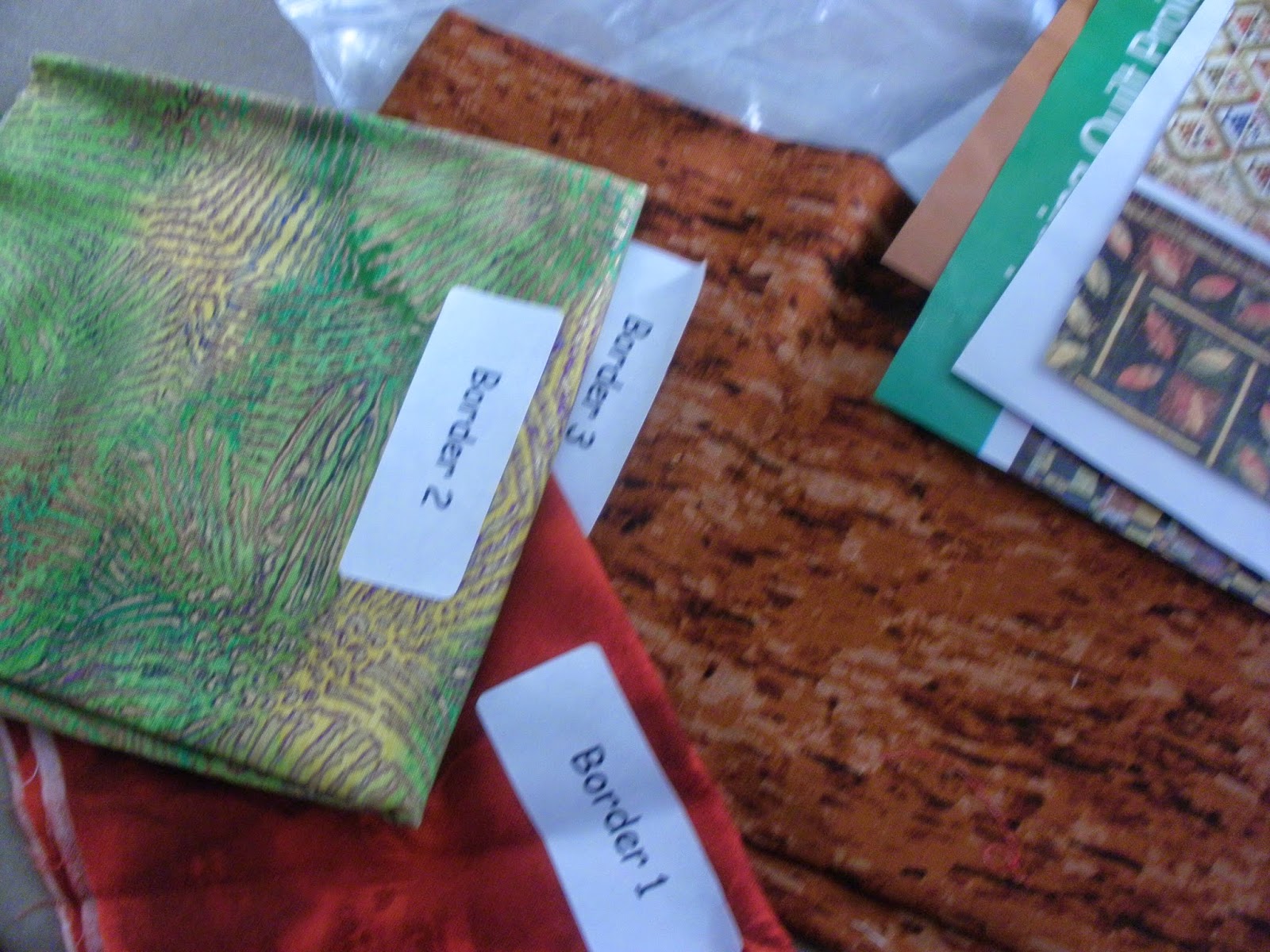 Next step was to cut the fabric and sew the strips together that make up the leaves. That's where I discovered that taking a bigger ruler would have helped. I only had a six inch square ruler. 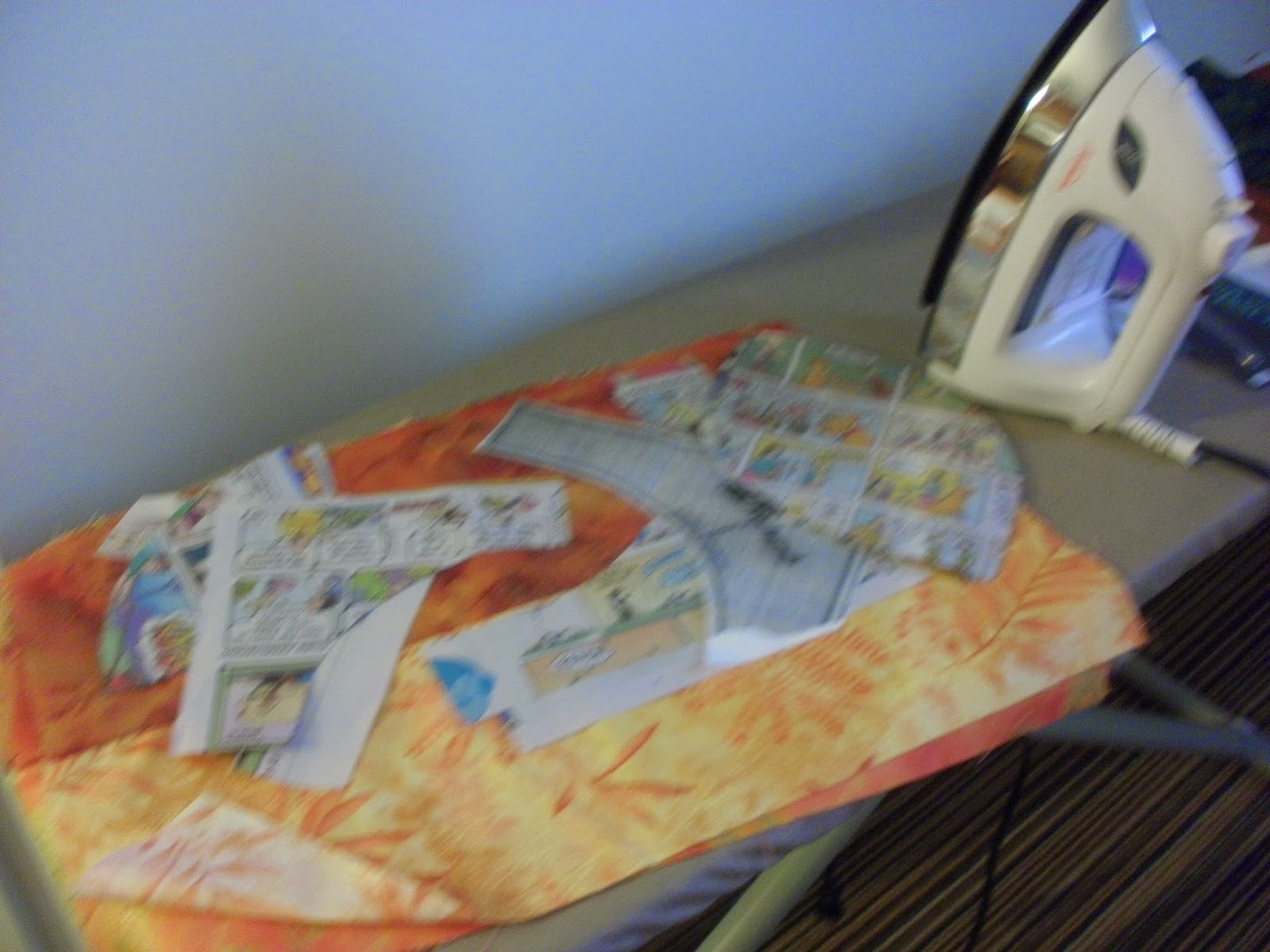 After that, it was time to use the template to cut the fabric.  I had to buy some scissors. I was planning on rotary cutting, but scissors worked much better. 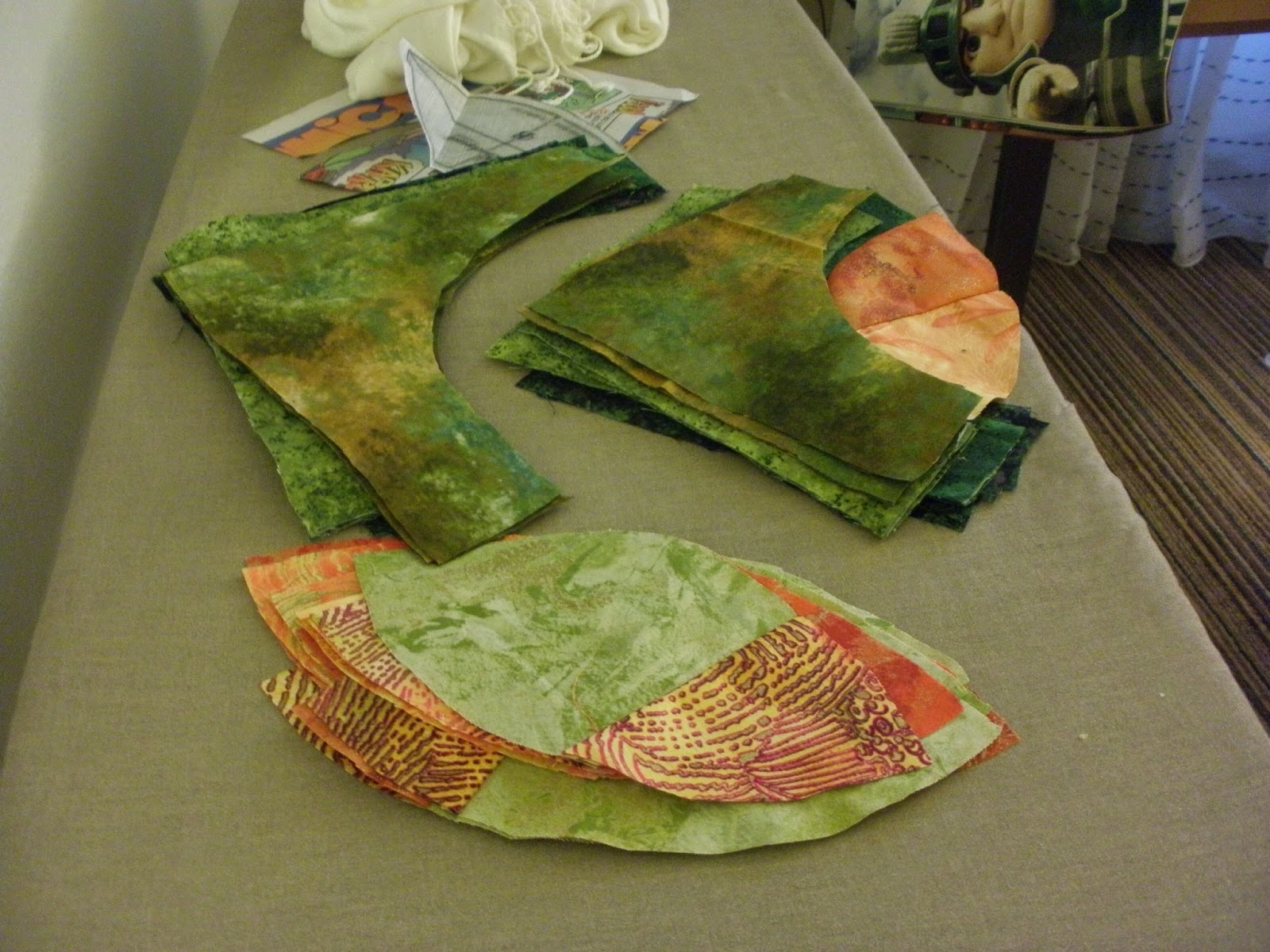 Here's a look at my sewing space. I had to move the sewing machine to cut the fabric. 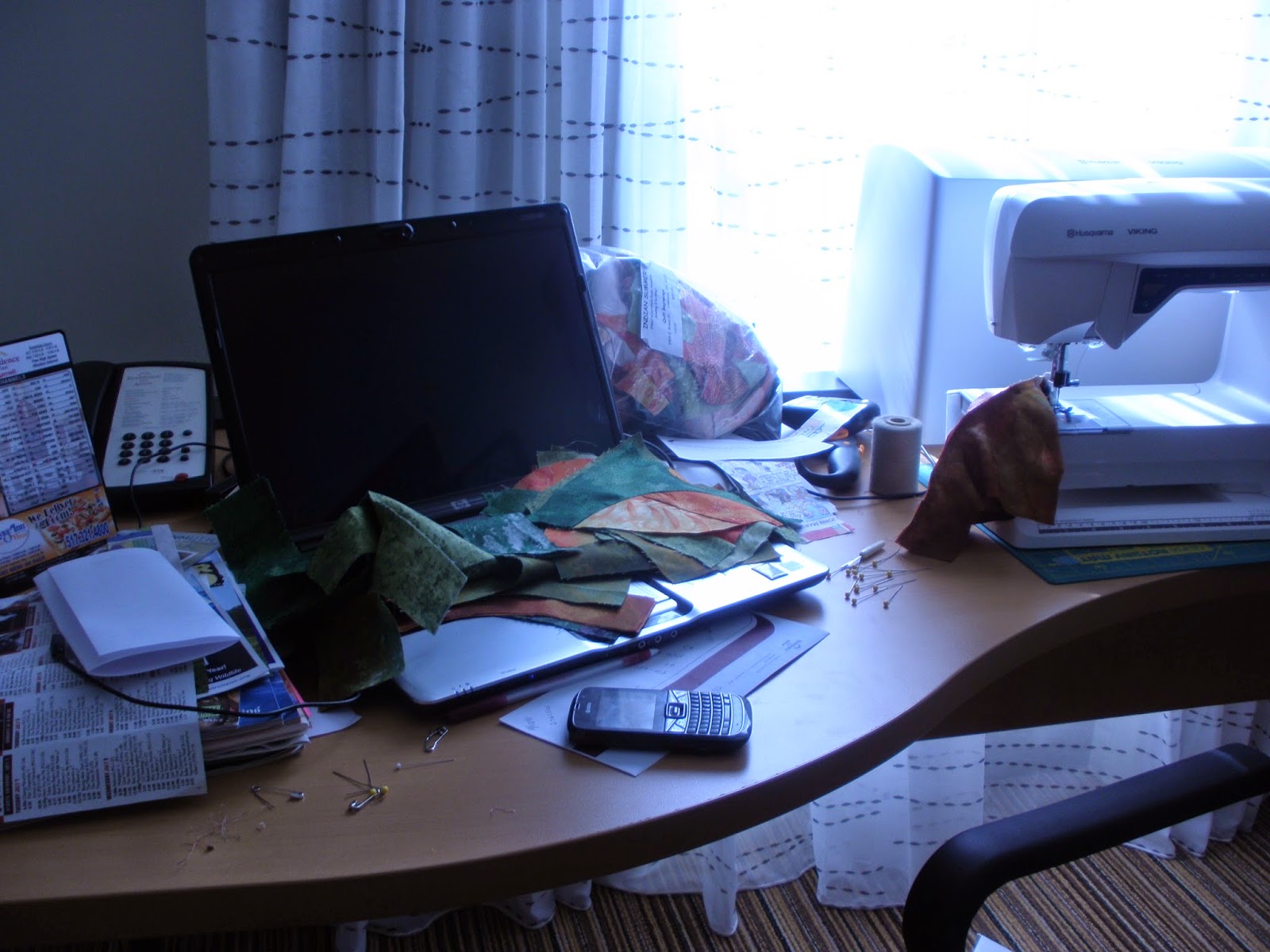 For some reason, I thought that the leaves in the center were bigger than the leaves on the sides, and that I was missing parts of the template, so I wasted some time making the missing templates, but I finally figured out the blocks were the same size and these three templates really fit together. 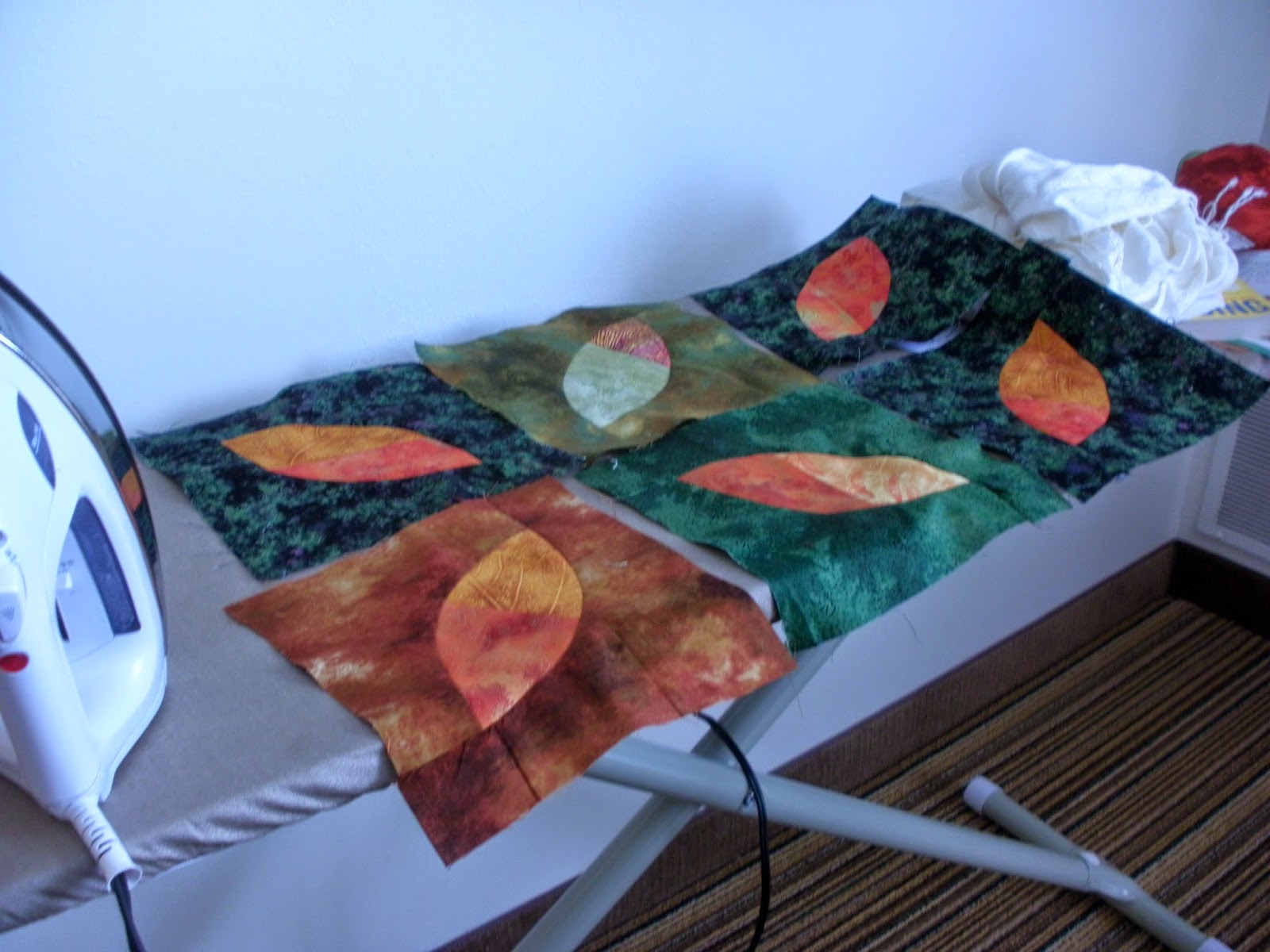 Checking the layout on the design bed. 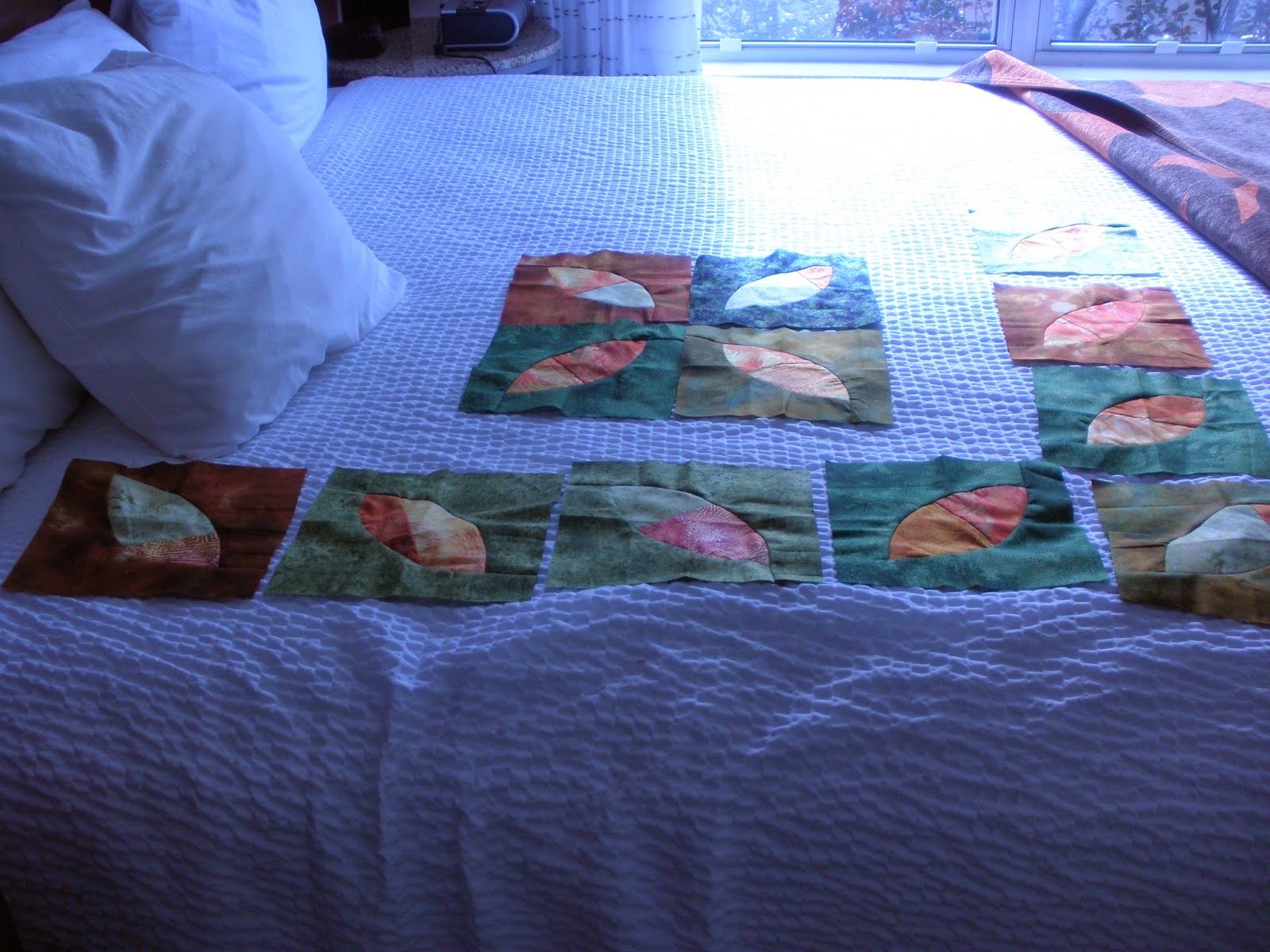 I found a walking path in the neighborhood, and everything is very green.  It seemed strange to come back and work with fall colors. 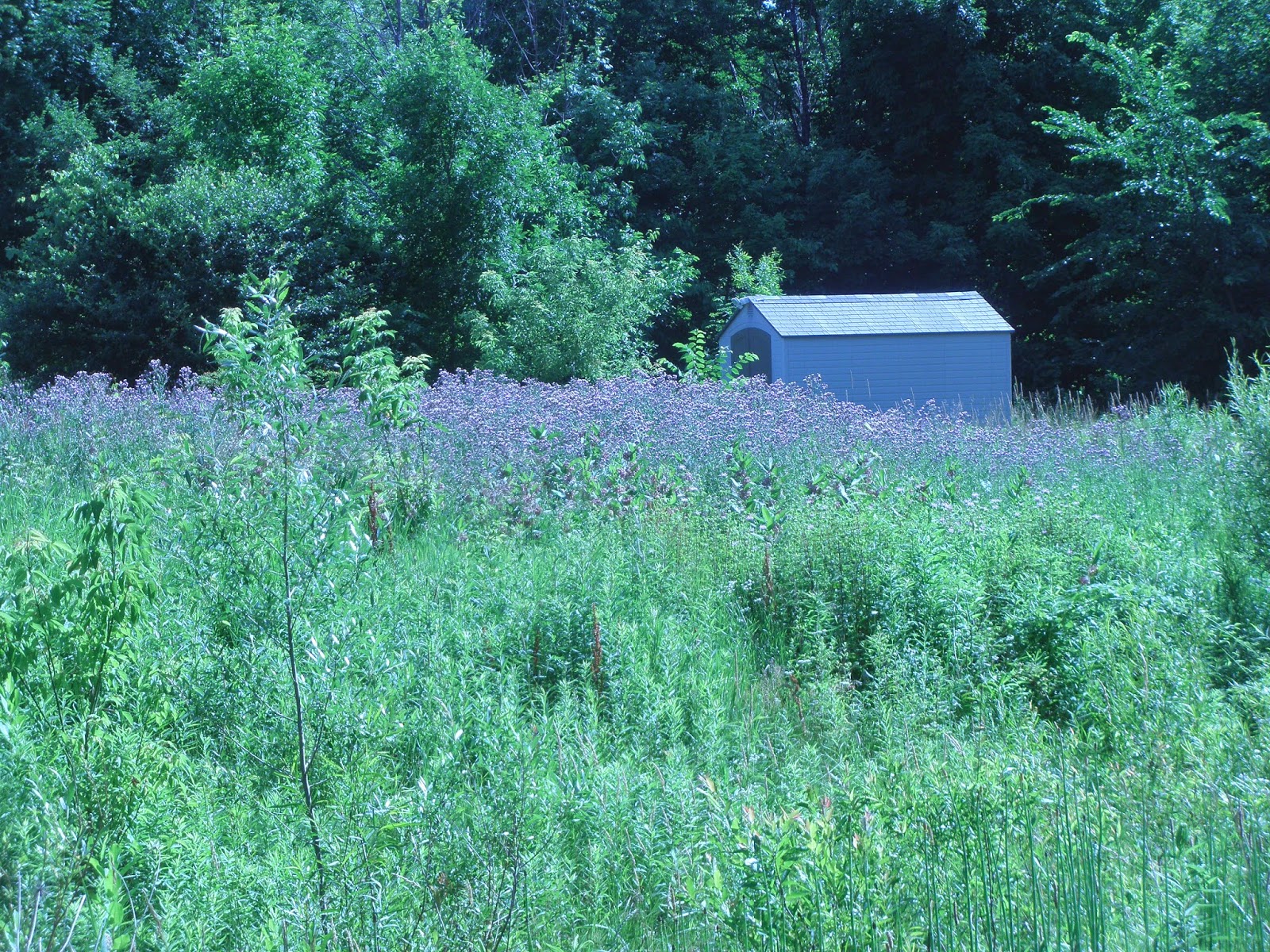 All the blocks are now pieced. 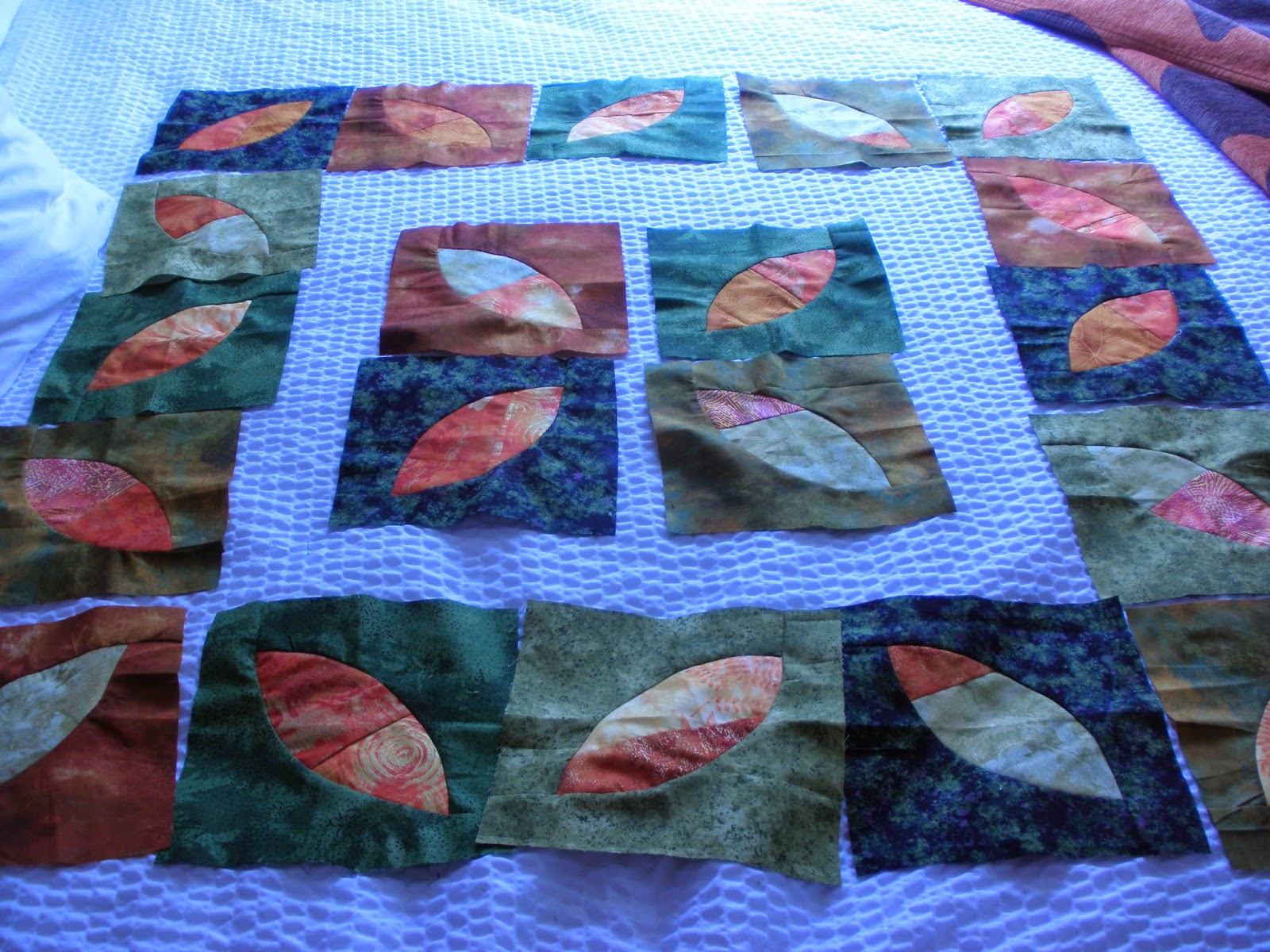 The blocks have all been trimmed and the rows have been sewn together. Time for the inner border. Since I didn't have a pattern, I had to try to figure out the border sizes, after long days of work. I also wasn't sure where Borders 1, 2 and 3 from the kit were supposed to go. There are four fabrics in borders, so I wasn't sure whether one has to be used in more than one place or whether I "borrowed" one of the borders for another quilt. 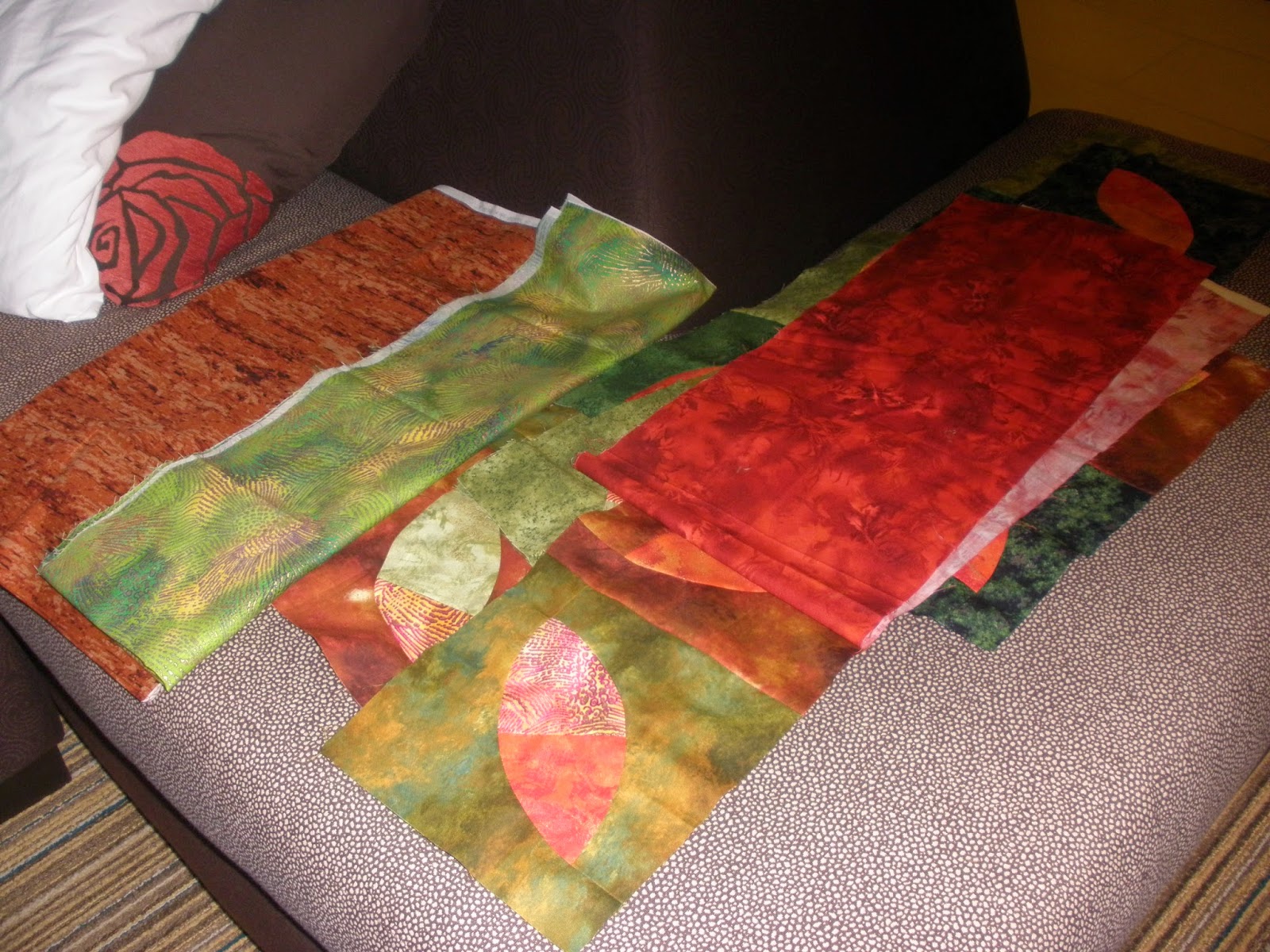 After I had finished cutting and sewing, I realized that I had done the math incorrectly (forgot to add one of the seams), so the border would be too small for the next round of leaves. I didn't have enough fabric to cut all new borders, so I made just two of the borders slightly larger than the others. 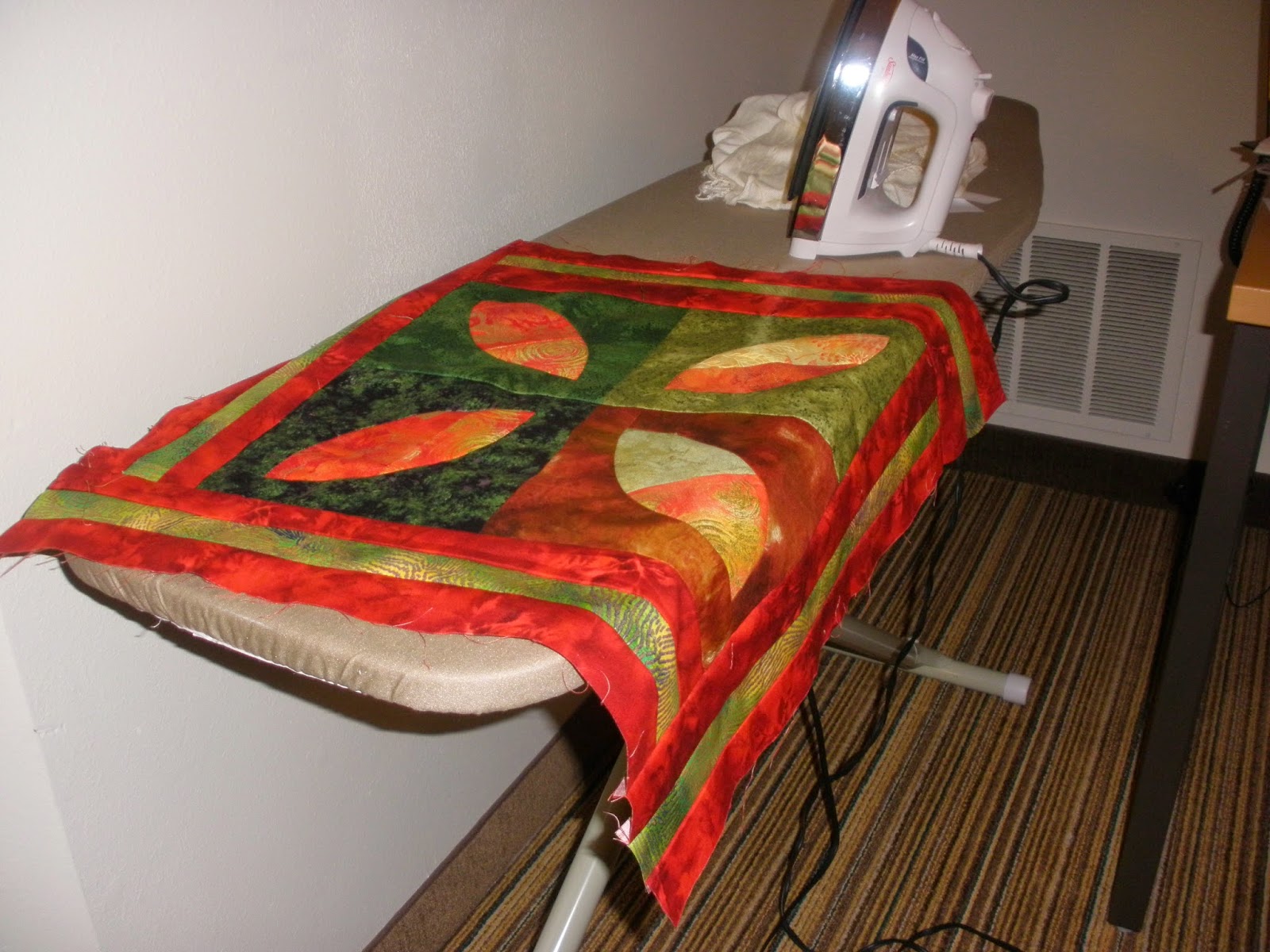 I was going to have time on the weekend to put together the rest of the top, but I wound up working all that weekend too, and then it was time to start packing up.

I'm home now and I have housework to do again, and preparing my own food. It seems like it may be a little while before I can finish this quilt.