I've been making progress on the Droid quilt, but these parts and pieces didn't seem blog worthy.  It is hard to tell what I am making until I put it all together, but I didn't want you to forget about me, so I will show you my progress.

I knew I wanted to use fabric I already had at home, and found several great choices.  It was hard to choose which fabric to use and where.  In the end, I decided to not let indecision slow down the progress. I especially had a hard time deciding which fabric to use for the skin and which one to use for the undershirt. It is all shades of beige, everything works everywhere. 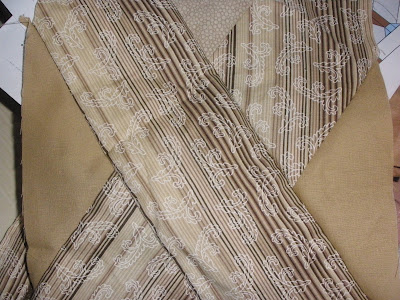 I chose a stripe for a tunic, and I love the way it looks like folds. I did have to unpick the top right and cut a new piece to make the stripe go the correct way.  Well worth cutting on the bias. There was also a burlap looking fabric that would have looked great for the tunic, but I could only choose one, and the pants also have that burlap pattern.

I was worried about using templates, but it went together without issue.

This is her belt and the bottom half of her tunic. I've been finger pressing since it is really hot.  I'm sure it will be fine when everything is pieced, and I press everything smooth. 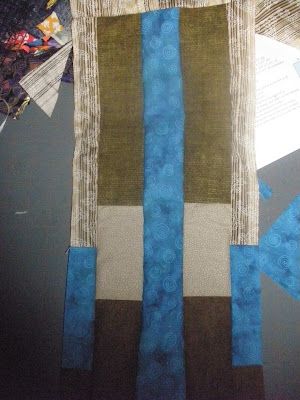 This is her pants, legs and part of her boots. She is very slim in the pattern. The pants look more brown than green in real life. 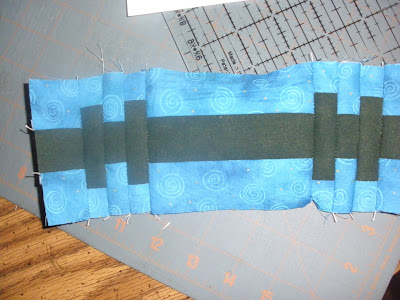 I didn't notice that little fold until I took the picture. I'll fix that.  I also have one of her arms done and ready to add. 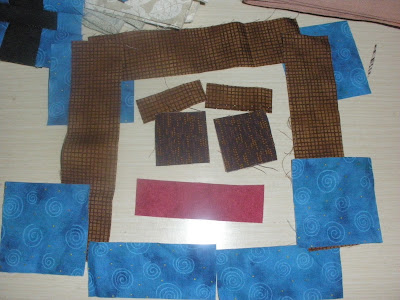 Parts of her face are ready to sew.  This is a fun project.
Posted by Shasta Matova at 4:21 PM 4 comments:

It's that time of the year when Lily Pad Quilting hosts Pets on Quilts.  I sat down to rest after our long walk today, fired up Bloglovin' and went on her blog.  As soon as I saw the announcement,  I knew we had to run out on the porch and grab some pictures before it started raining. I needn't have hurried though, since Zeus is so photogenic, the pictures just rolled off the camera in no time.

Here are the best ones. 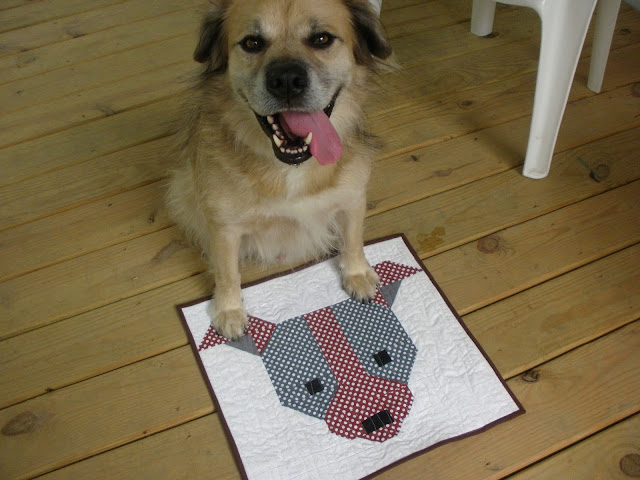 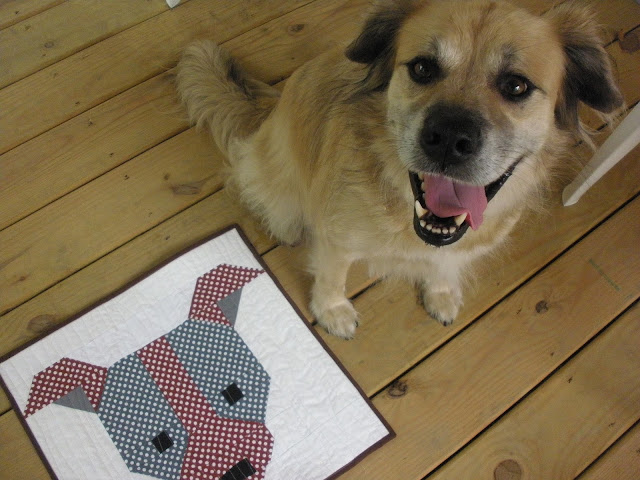 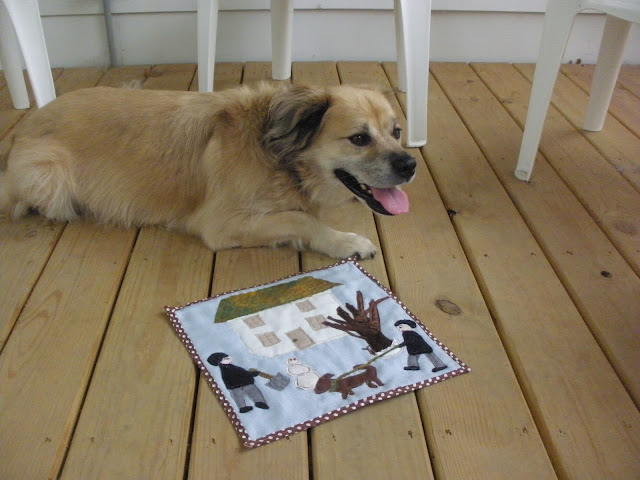 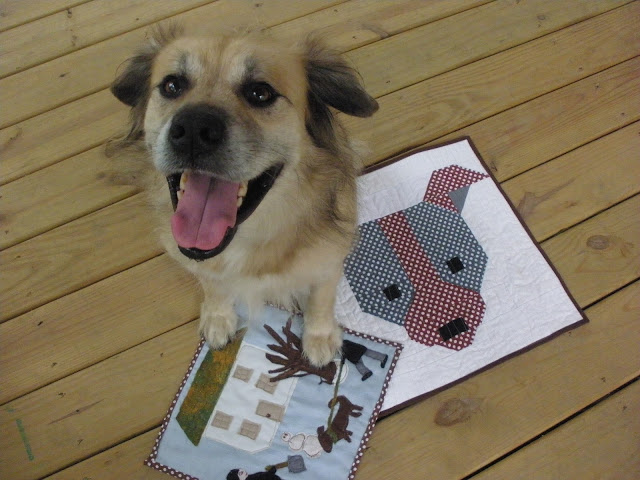 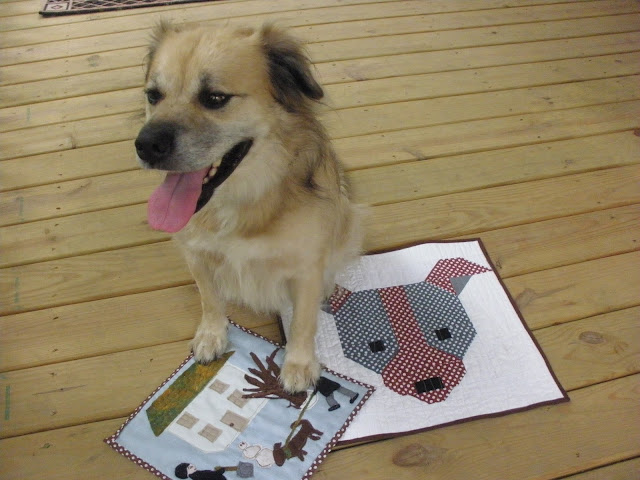 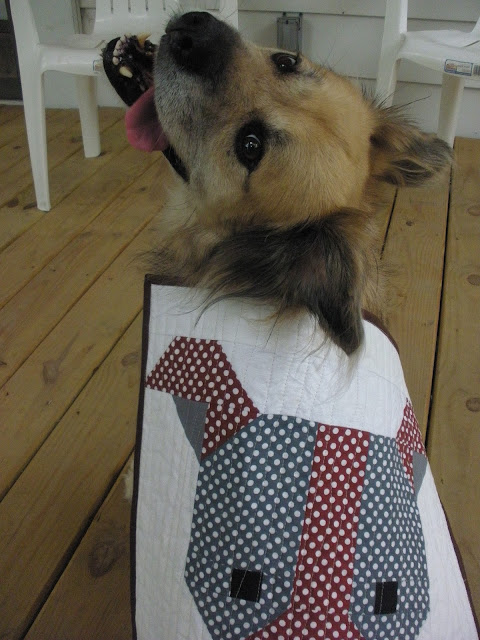 I knew you were so busy looking at Zeus that I might need to point out that there is a dog on each of the quilts too. I am entering the Dog on Quilt and the Pet Themed Quilt Categories.
Posted by Shasta Matova at 11:13 AM 28 comments: 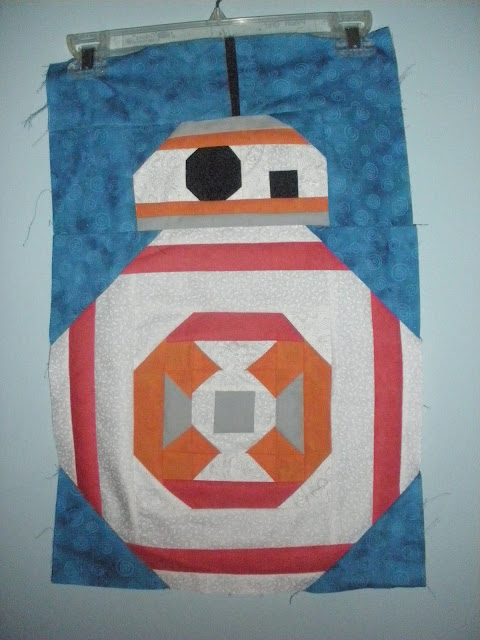 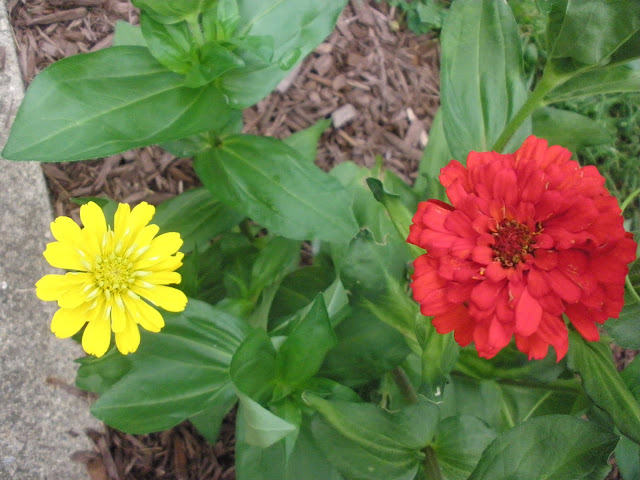 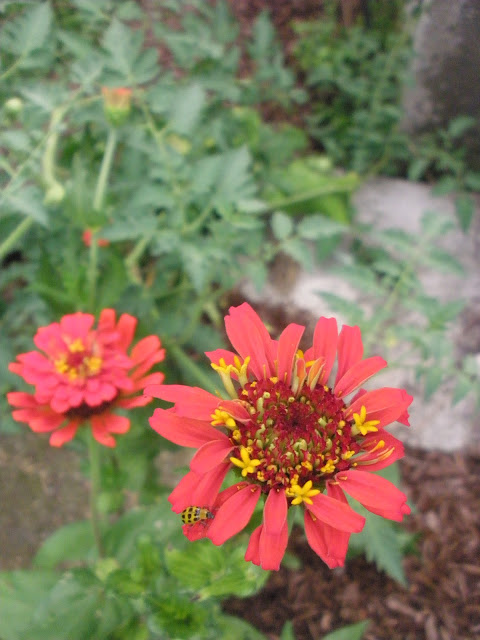 Another New Quilt is Started

Ever since the peak time for my work was over, I have been diligently working on making progress on my quilting projects. I thought that if I kept myself busy, I could delay or avoid starting a new project.  In the past, I would promise myself that I could start a new project after I finished an existing project, but the quilts I was working on were long term projects - BOMS which did not have all the months released - so that wouldn't work.

Until now, I was able to keep working on getting up to date on the Adrinka blocks, and making progress on the 1857 blocks.  I decided it would be a good time to work on putting together the blocks for the Elephant Parade.  That led me to think I could start this new project as a leader/ender. Or maybe the idea to work on the new project came, which led me to think I could put together Elephant Parade as a leader/ender.  These two projects became tied together because they are pieced in similar ways. They are also similar because I am using the solids box for the fabric.  They also share the white fabric.

I bought yards and yards of the white fabric when the modern movement first came out and I saw how a white background was  necessary for most of those quilts. Yes it is tone on tone. I thought solids were a fad. Why pay the same price for plain as you pay for fancy? 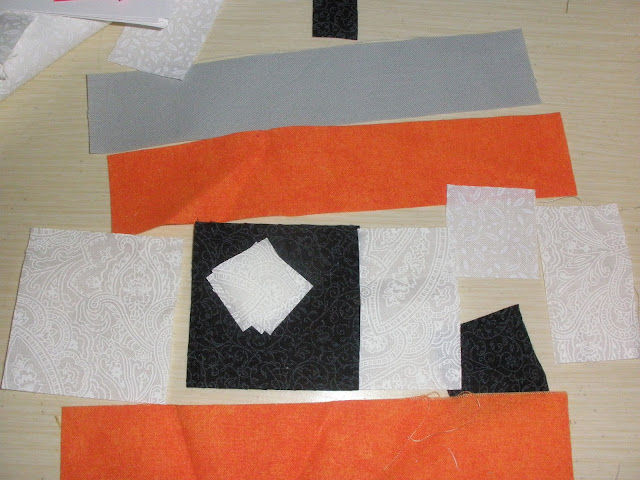 I saw this free pattern on a blog during peak, and knew that I had to set it aside for later, but recently I saw someone else made this quilt and that reminded me all over again that it took great strength for me to not start it in January.  I've held off starting this quilt since January! 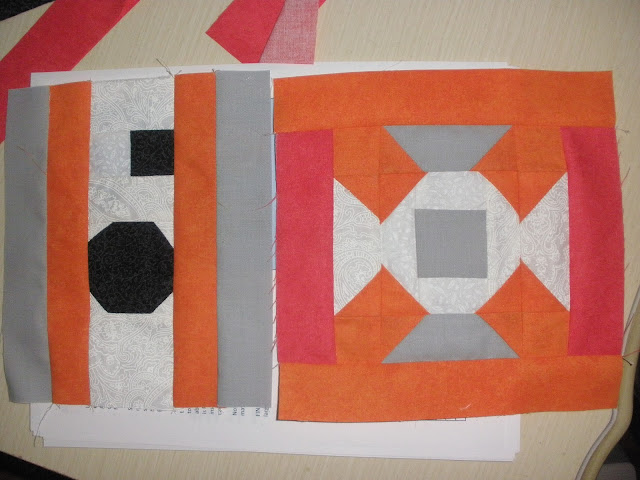 It turns out that Elephant Parade does not work as a good leader/ender in its current state.  I need to trim and measure my improv blocks. Some of them were made the standard size, but some of them were made to go into the sashing.  What sounded like a clever idea when I was making them is going to be more work for me now. I also need to decide on the layout so I know which blocks need sashing.

Also, one part of the new quilt serves easily as the leader/ender for another part, which makes it easier to keep progress going at a steady pace.

I feel guilty for starting a new quilt.  I make quilts for the joy of making them, not for the completed projects, so I really shouldn't feel guilty for not finishing something before starting this one, but I do anyway.

Linked to Monday Making, MCM #34 and Moving It Forward.
Posted by Shasta Matova at 8:56 AM 9 comments:

Zinnias in the Garden

It was cloudy when we went for our walk this morning so I decided it was the perfect time to take some photos of my zinnias. I have three beds of zinnias, so there is a profusion of color out there. It's been a harsh sun every every other day I thought about photographing them. It has been dry so the leaves are a bit wilted, but the flowers still look great. 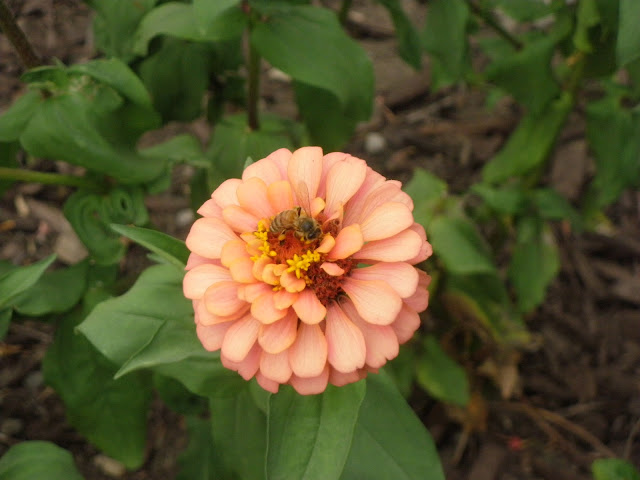 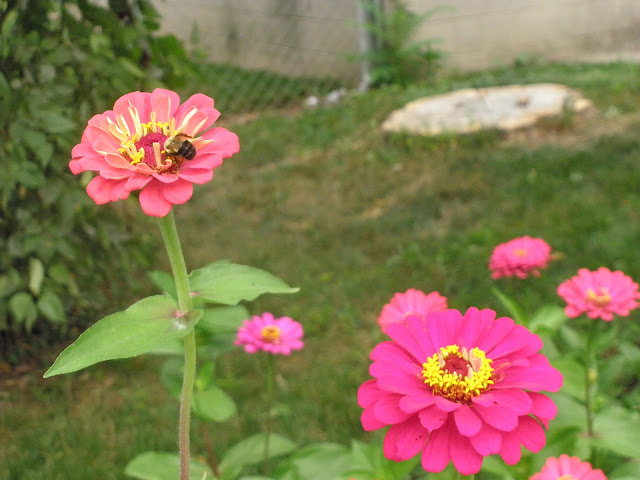 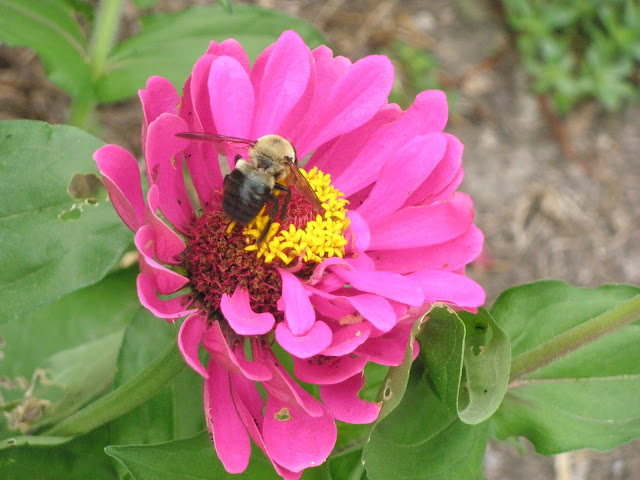 I took a lot of photos of them. The sports setting worked best even though it really wasn't windy this morning. The funny thing is when I chose the best ones, I found I liked 37, 47 and 57 the best. This happens to me quite a bit, where I like every tenth picture. Good thing I have a digital camera!
Posted by Shasta Matova at 3:32 PM 3 comments: 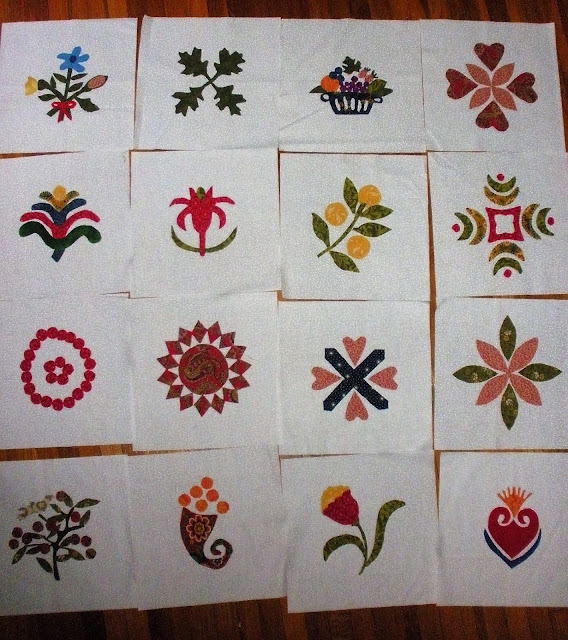 I have been working on the 1857 quilt lately. I prepped some more blocks and now have 16 blocks prepped. I even sewed down some of the fusible applique. I really like how it looks. One of the decision I made early on was that I was going to match the thread to the applique, and since this quilt has at least four colors (red, yellow, blue and green), this will take a lot of thread changes to get done.

I worked on pink today, so the block that has two different pinks is done. It is the only block that is done, and even it isn't really done because I still need to add the corner diamonds. But progress has been made on the quilt and I am satisfied with that.

This is a free BOM offered by Sentimental Stitches. We get a month to download the batch of blocks that are offered that month. After that, they are available for purchase. 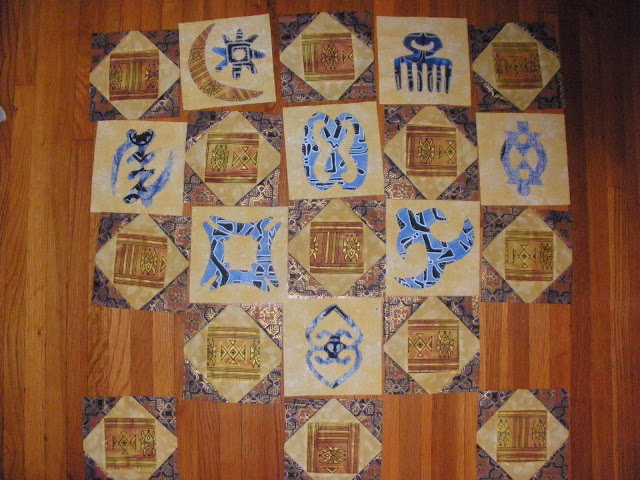 I know last time I said I had all month to make the August block, but my finish didn't feel finished, so I went ahead and made it.  It is the middle one in the second row. Only a few more blocks left to go.

Linked to Let's Bee Social. I really enjoy seeing all the different types of projects quilters are making.
Posted by Shasta Matova at 10:14 AM 4 comments: