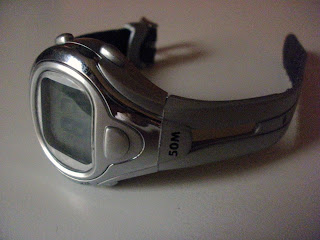 When we went to London, we had to deal with a five hour time change. London is five hours ahead of Columbus. Then, while we were there, daylight savings time ended, and we switched our clocks back an hour. Actually, just the watch - I bought a cheap watch for the trip since the cell phone wouldn't work.

Then we went to the airport. It caused some confusion when we landed in the states, because the US had not changed their time, and the difference was no longer five hours.

No matter, I was able to handle all of these changes just fine, even though both my mother and sister did have jet lag when they returned.

Then daylight savings time ended here, and we had to switch our clocks an hour again. I am having the hardest time with this switch. I think part of the reason is that my dog doesn't understand the time change thing. The other part has to be my own indecision.

He wakes me at what he thinks is the usual time to wake up, which is really an hour earlier than what time I need to be getting up. But I remember Ben Franklin's adage, "Early to bed, early to rise makes a man healthy, wealthy and wise." I want to be healthy wealthy and wise, so I might as well get up an hour earlier.

So am I refusing to adjust to change, or have I smarted the system? I don't know yet. I guess I will find out the next time I have an appointment and see if I show up on time!

So what have I been doing with all my time? I have been writing more Millionaire Tips articles on Hugpages. I joined the 30 hubs in 30 days challenge, and completed that successfully. Can you believe it? I've already written 30 hubs. I mostly focus on quilting, genealogy, and finance, although a few other topics are thrown in now and then.

Now I have accepted the 100 hubs in 30 days challenge. This is obviously much more challenging, especially since I am trying to continue providing quality with the quantity, and am still learning about hub writing.  You will be seeing my hubs change frequently on the sidebar. I will be doing many quilting hubs, since they won't take me as much research. In my quilting hubs, I particularly like How to Gift a Quilt.

This week, I will also be cutting more denim strips since I will be probably be weaving this week. I also remembered that I need to pick up the November blocks of the month.  I am behind in sewing the BOMs so hopefully I can make progress on those as well.
Posted by Shasta Matova at 7:58 AM 2 comments: 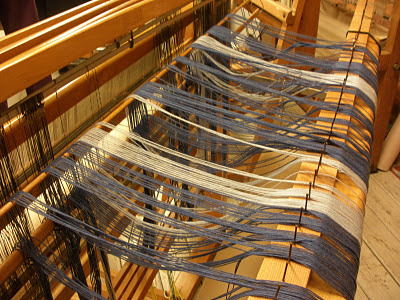 My sister, mother and I went to London England for a week. It was a last minute decision to see the relatives. Two of my mother's sisters and her brother live there, and we managed to see all of them. We also took my daughter out for a day of sightseeing, and deliver some sweaters to her so she can keep warm this winter.It was incredible hearing her voice, my heart felt so much lighter and all felt right in the world. The return trip was difficult, going more than three thousand miles away from her. 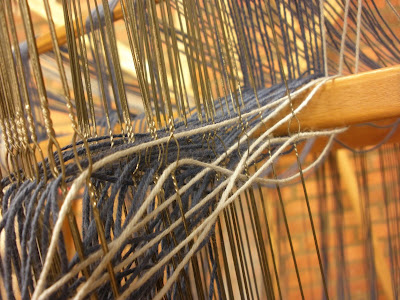 Our sessions of the weaving class is finished, but the teacher said we could keep coming until we are finished with our first projects. All the threads have been loaded onto the drum on the loom for my denim rug. I am in the process of threading all the heddles. Luckily, the eye of these heddles is much bigger than a sewing needle. This week, I will be madly cutting denim strips to make the rug, because I believe that I will be able to actually start weaving.
Posted by Shasta Matova at 8:11 PM 2 comments: