Please Help Me With Blushing Bride

I have finished binding the Blushing Bride quilt.  Normally, at this point, I would present the finished quilt - Ta Da, and move on to the next one.

But I am not sure I am quite finished with this one.  Here's what it looks like right now.  Choice A is to leave it as is and call it done. 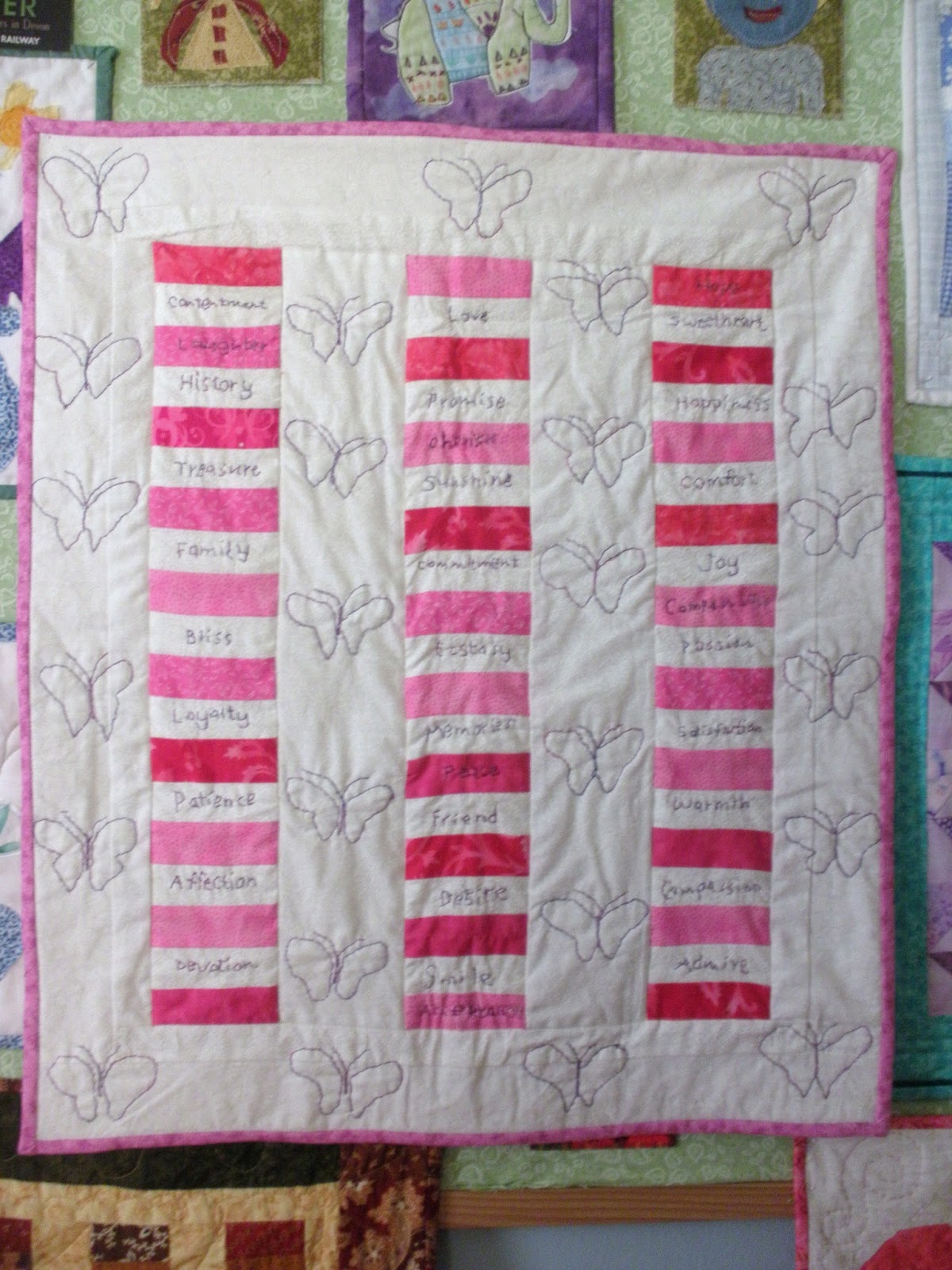 As you may recall, my feed dogs on my sewing machine fell asleep, so I needed to manually move the quilt while quilting it.  Some of the quilting stitches have bad tension which is obvious on the back. It is minor though so it really wouldn't cause difficulty to leave it as it is.   Also when I was hand stitching the binding, a couple of the stitches showed up on the front. Yes, I could have fixed those, but I decided that since I was going to quilt by hand anyway, I may as well leave them in.  Plus, I am not sure if those big white spaces are okay as they are.  (It is a small quilt so big is a relative term). I thought of some ideas to fill up the spaces. I am planning to do whatever I do by hand. 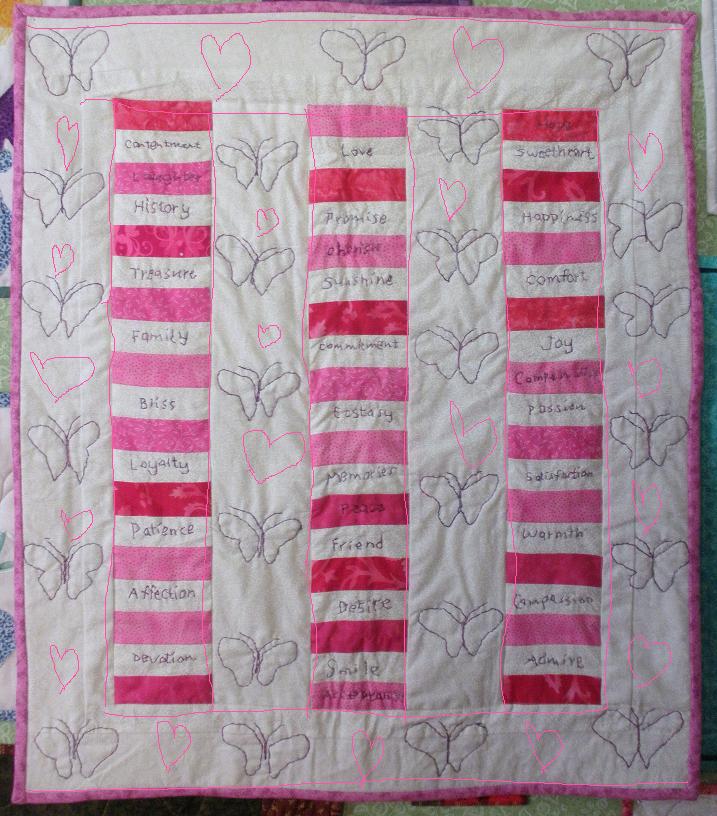 Choice B: I could add hearts or roses  in the empty spaces. I've roughly drawn this out in Paint to see what that would look like. Hopefully the finished product will be a bit neater, although with the whimsical butterflies, I am not aiming for perfection. 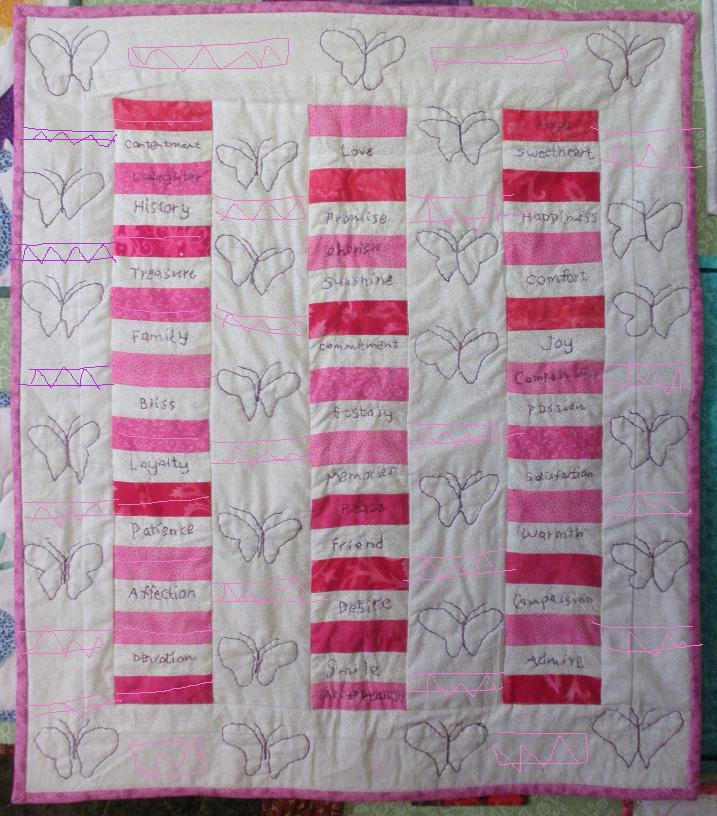 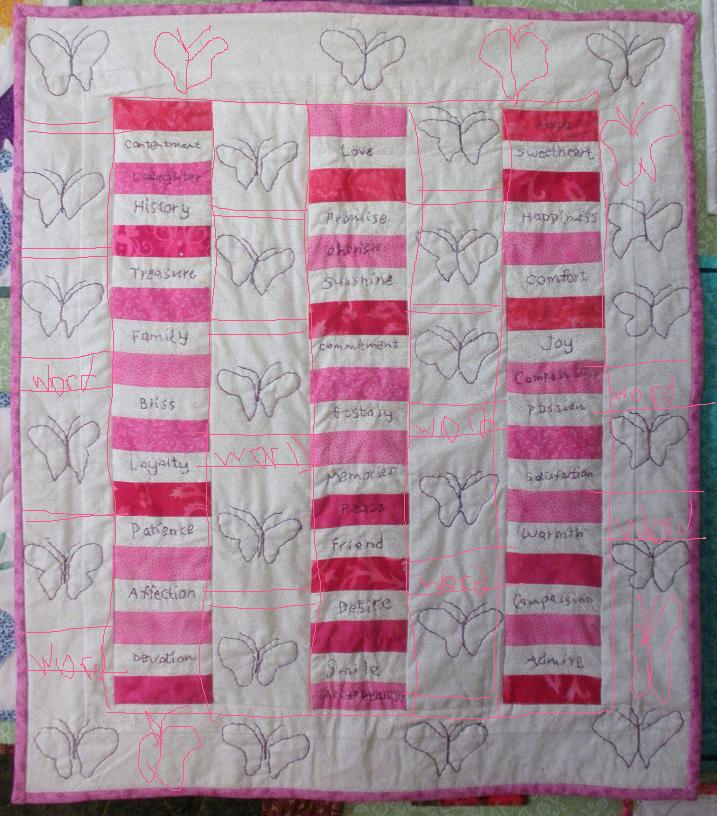 Choice D: I could add some more words and butterflies to fill up the space and quilt them.

What do you think? What would be the best way to quilt and finish this quilt?

In case you were wondering about the bulletin board, here is what it looks like today. Blushing Bride needs to blush because she is the biggest quilt on the wall and is covering up a whole quilt as well as parts of several quilts because of that. 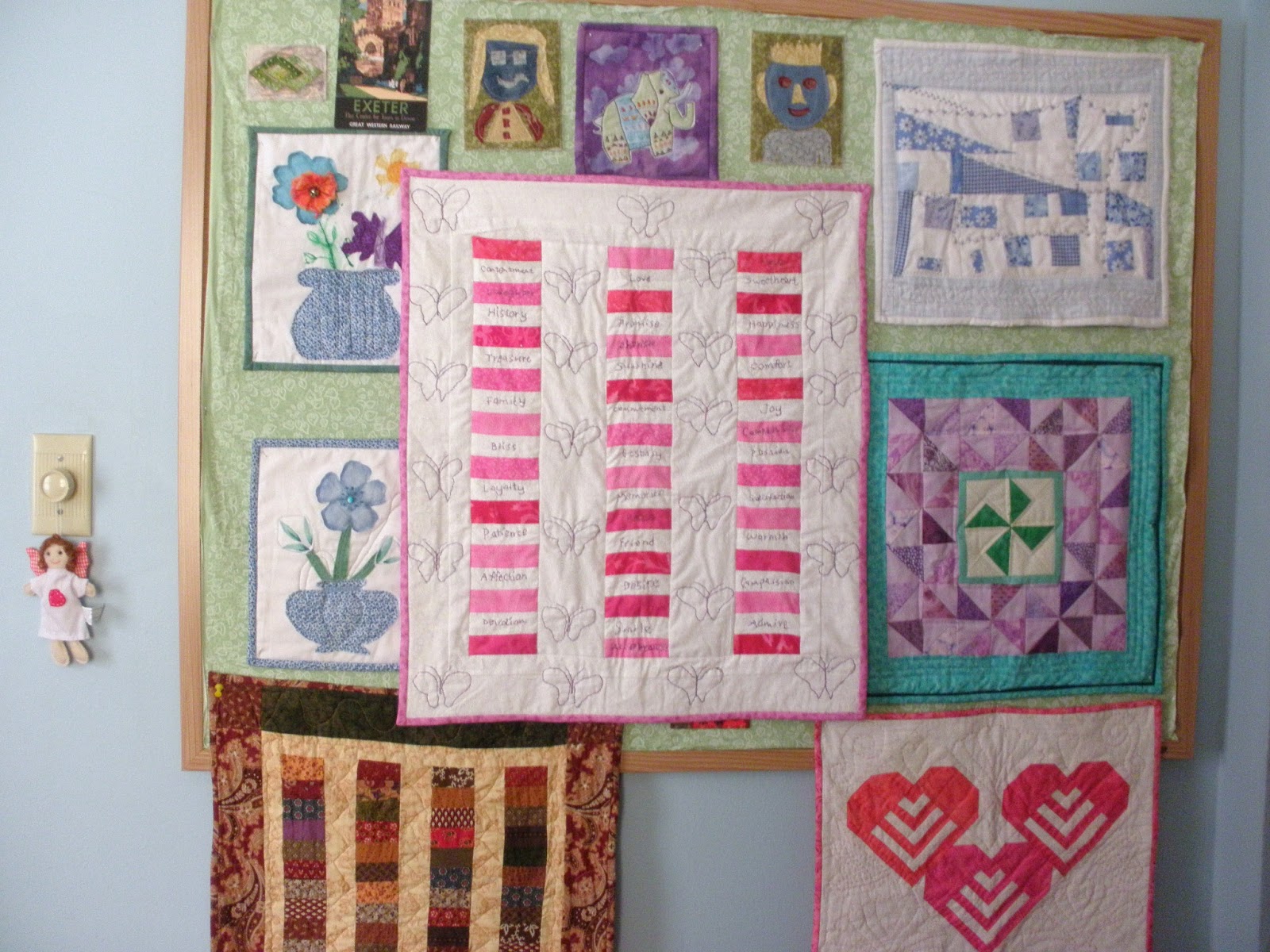 Posted by Shasta Matova at 2:59 PM No comments:

Before I get to the big news, I want to let you know that my sewing machine is now working again.  I opened the machine from the bottom (the part you aren't supposed to touch if you don't want to lose your warranty) and used a toothbrush to clean out the lint turned the wheel back and forth and whatever was jamming it up is now unjammed.  I was able to sew the binding on my Bridal Wishes quilt, and am now sewing down the other side by hand.  If you recall, I embroidered words on it like "love", "friend", and "joy".  Well I just noticed that "ecstasy" is right in the middle of the quilt.  I apparently was right to use Blushing Bride as name for it then! 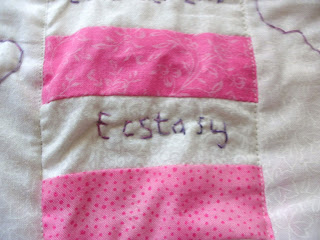 On to the big news, my sister has a neighbor who wants to sell her house, and was selling it for a very low price.  She wanted to make sure the house was properly fixed up so the value of her own house doesn't go down.  I have always wanted to buy houses to sell or rent, but didn't think that I would be able to make much money on it since I don't have the manpower or skills to do much of the work. The timing isn't good for me, but I thought that if it was that good a deal, I could make it work.   I would have preferred to take my time to see other houses in the market to find current market values and make sure that this house is appropriately priced for the condition it is in, etc., but my sister already signed the contract!  We are now trying to work out a partnership agreement.   It is going to be a wild ride investing with her and I am sure I am going to learn a lot along the way. 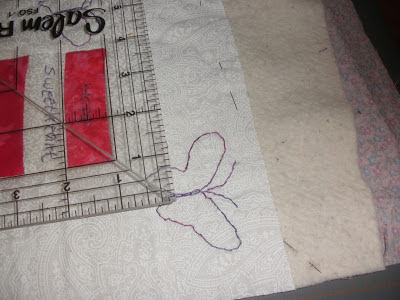 When I posted my end of the year post, I thought I should try to sneak in another finish, like I've done in other years, but I didn't think I would have time.  I decided to go ahead and work on finishing anyway, since it could be a nice early finish to begin the new year with.

I brought down my quilt that was closest to completion, my wedding wishes - I called it Blushing Bride according to the labels.  If you recall, it was supposed to be a simple pink and white modern quilt, but I got carried away and added words to it.  Then I added butterflies in the sashing.  I had planned on adding some roses between the butterflies, but when I looked at it again, it doesn't seem to need anything else.  I decided to go ahead and finish it off, and if I wanted to add the roses later, I could always quilt them in after it was bound.

The batting had been added when I did the embroidery, but not the back (to keep me from having to worry about keeping the embroidery neat in the back).  I added a back, and started to quilt it in the ditch.  Just a few seams should hold it just fine.  The feed dogs moved up and down but did not move the fabric forward.  I managed to pull the quilt through - free motion in the ditch using a walking foot maneuver.  Then I trimmed the quilt down and cut out the binding fabric. One of my favorite parts of quilting is trimming away the excess batting and backing to see what the quilt really looks like. 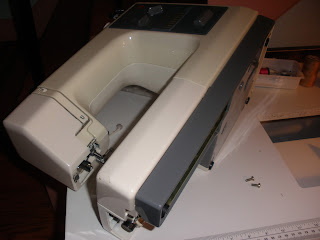 I tried to clean the machine, hoping that would do the trick.  I can push the feed dogs back and forth, but they won't go on their own.  Getting it fixed would be $79, and my machine cost $200 to buy it 24 years ago, so I am not sure that it would be worth it.  So for now, I am going to take the machine apart and try to fix it myself, and look for a new machine. Does you know how to fix this?

Until then, I will probably try to keep some forward momentum going on quilting by doing some handwork - applique on the Moondance quilt and/or applique and embroidery on the African crazy quilt.  Hopefully I will have some progress to show you soon.
Posted by Shasta Matova at 8:28 PM 4 comments: