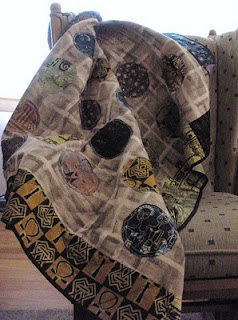 It is Quilt Festival Time at Amy's Creative Side, and she has asked us to show a quilt. I have decided to show you a quilt that is keeping me cozy as the days are getting colder.  This is the last big quilt I have finished - I have done a couple of wall hangings since then, and have progressed on other ones, but this is the last big finish.

It is different from anything I have ever done.  The circles are all African prints that I bought at a quilt show.  They were cut using a CD as a template, and are raw edge appliqued to a big background fabric.  I added pieces for the border, and quilted it using my walking foot.  The quilt is designed to keep evil spirits confused enough to stay out.  I think I will eventually add more quilting to it. It is finished now - it is bound and labeled, but I reserve the right to add more quilting stitches. 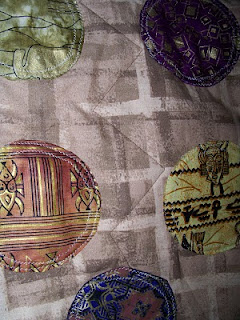 The quilt with its beige background fits in anyplace, yet has lots of interest and zing. I like the shiny fabrics!  It is "different" and may not appeal to everybody, but it does appeal to me. It doesn't have that instant "pretty" factor, but it's like the ugly duckling that I've just grow to love. 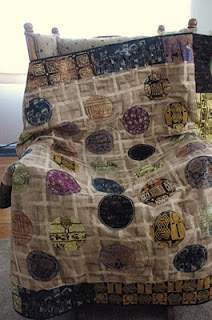 If you are here from Amy's blog, welcome. Please feel free to take a look around.
Posted by Shasta Matova at 1:42 PM 11 comments: 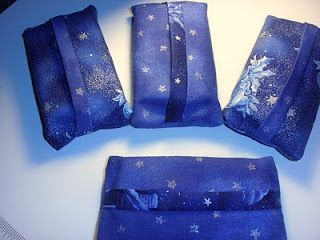 I don't think that anyone in my family has every thought to themselves "Hmm, I need a cover for these little tissue packages," but I would like to think that if they saw one at a craft show, they would say "Hey, that's cute, and could come in handy" and get it for themselves if the price was right.

I saw a recent tutorial, and probably bookmarked it, but didn't make it the day I saw it.  When I was ready, I just did an internet search, because my bookmark list is very long, and looked at the first couple.  Neither is the tutorial  I bookmarked,  but it is simple enough that either would work.  The first one I saw uses smaller fabric than the second one.  But it is a simple tissue cover.  The second one uses bigger fabric and overlaps them a bit.  It also puts all the excess fabric on one side, which works well if you are overlapping.  But it is more complicated because it includes a hanger.  So I combined the two, made it simple without a hanger, although I did box the corners, but with bigger fabric, and with the excess fabric on one side instead of both sides.

They are fun to make and quick. And if you don't have tissues, candy fits in there really nicely too!

PS. I figured out the comments problem.  I have my mail forwarded from my HighRoadQuilter account to one I use everyday, to avoid having to look too many places for my mail.  I have to log in every so many days in order for them to know that I haven't abandoned it, and close it down.  Apparently they thought I had abandoned it.  I'm just glad they didn't give the name to someone else.  And I've noted on my calendar to log in next time.
Posted by Shasta Matova at 1:10 PM 3 comments:

Email ThisBlogThis!Share to TwitterShare to FacebookShare to Pinterest
Labels: crafts

Don't Cry for Me Blogland 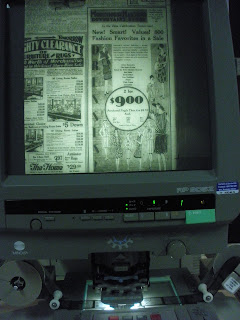 Don't cry for me Blogland. You know I never left you.

These gorgeous dresses are on sale 2 for $9.  Unfortunately, you have to go back to 1935 to get them!

I've been doing some genealogy research.  Pulling up microfilm obituaries for newly found cousins.  Even though there is so much on the internet now, more than 90% of is not online. The really good stuff requires old technology and dusty papers.  I saw a TV show where someone just did an internet search on someone's name and their entire family tree was right there.  That doesn't happen in real life.  Which is a good thing, because it is fun to do the research.

In quilting news, I have added the inner borders to the rail fence quilt.  The outer (piano) borders have been pieced together, but I have to count to see how many I need on each side.

I am still trying to think of ideas for the holiday gifts.  My impulse is to just make what I want, and figure out who to give it to later.  Would it be improper to put a pile on the floor and ask people to just pick their gift from the pile?

Hopefully, once I get the ball rolling, I will have ideas for specific people.  It is the starting that is the hardest.

Edited to add:  I thought that you all had abandoned me!  I just looked at my blog, and there were 8 comments to my last post, and I didn't get a single one in my e-mail!  Thank you for your comments, and I don't feel abandoned anymore.  I will check my settings, even though I didn't change anything.
Posted by Shasta Matova at 3:25 PM 7 comments: 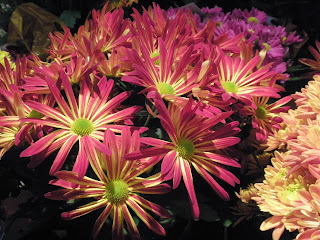 Do you remember the handmade gifts I made last year? While I am sure that my gift recipients would prefer store bought items that are specifically tailored to their specifications (electronics, etc.), I really enjoyed making the gifts. And throughout the year, some of the recipients made, instead of bought, their gifts to me. I would like to think that they enjoyed doing that.

So I have decided that I am going to be making the gifts again this year. It was difficult to come up with gifts last year, and I would think that it might be slightly more difficult this year, since last year's ideas are used up. Although some gift ideas will be repeated - people can always use more ornaments, coasters, pillow cases, etc.

If you have any ideas, please let me know. But I am going to be going through my stash to see if any of the fabric has any particular ideas about what it wants to be..
Posted by Shasta Matova at 11:17 AM 8 comments: 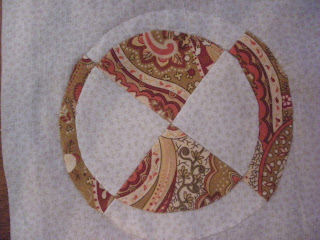 I decided to do something do-able instead of stressing out over it.  I decided to do a block for the Jane Stickle book.  Not only would this give me a completion, it would also bring progress to this project that has stalled for a very long time.  Longer than I like to imagine.  Part of the problem has to do with a change in scanners, which is a silly reason indeed.  I realize that the quilt won't have the 10/10/10 date on it, but the spreadsheet will.

I could take out the bigger parts and trim and applique them down smaller, but in order to have a 10/10/10 finish, I decided to call this finished and be done with it.  I don't think it looks bad, so it seems more of a design choice than an error.

As always,  I reserve the right to remake any blocks that are bothering me at that time.  But really, I think I will have so many of these hmmm blocks that I won't want to make the effort.

I have also finished all four of the Quilts for Kids quilts!  Yeah!  I need to set the ink on the labels, and wash them before I send them off.  Oh yeah, and take pictures first.
Posted by Shasta Matova at 7:38 PM 2 comments: 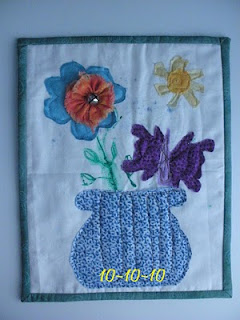 When I found out a few days ago that 10/10/10 was coming up, and I thought I should work on a lot of quilts, and save the last stitch on each for this special day, so I could put this date on them.  No matter that it looks like a code of some kind, and not a date. It didn't happen, of course.  I went ahead and finished the last quilt, even though it could have waited for this date.  I guess I can make something small to finish, but I wouldn't count on it.

What are you finishing today?
Posted by Shasta Matova at 10:42 AM 6 comments: 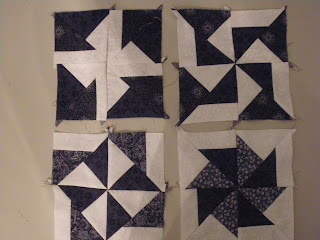 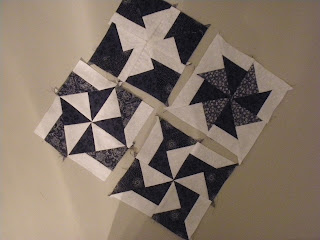 I want to put it together to make a small quilt. Do you have ideas about how to set these?
Posted by Shasta Matova at 7:49 PM 4 comments: 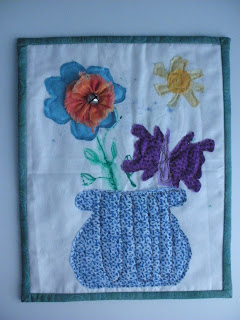 I found this in one of my scrap boxes. The flower and the vase was already made, and I had abandoned it because of my failed attempt of using fabric paint. Yes, there is a jingle bell on the flower.  I was originally trying to put something over the paint to cover it up. I could either throw it away or finish it. Since I was in the "anything works" mode for the rail fence, I grabbed a few fabric scraps to finish it off. I was a little bit more selective than the rail fence, but not by much. Whatever my first idea was, that's what I did. No debate. No worries.