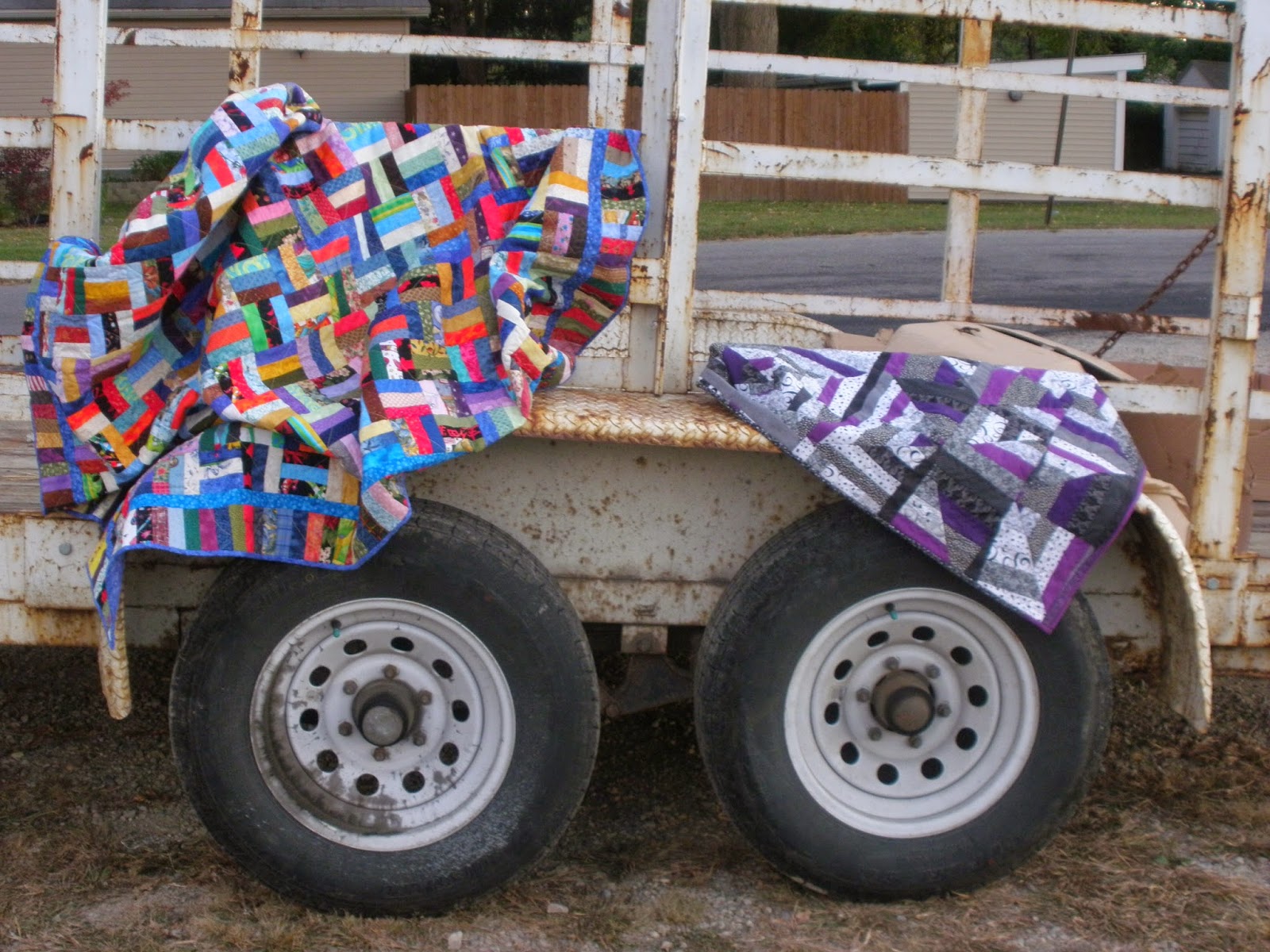 I thought I'd take the time to answer some questions about the quilt you hadn't thought to ask.

Sherri asked a question on her blog about our quilt making process.  She asked


What blocks and supports your improvisational flow?

This is the first improv quilt I have ever made.  The biggest challenge I had in making this quilt is the lack of guidance.  I am used to hand holding with quilt patterns, and then sometimes I will veer off into my own direction.  This means that I can pretty much know what the finished product will look like.  With fewer directions, I was left on my own to make my own decisions from the very beginning.  While this is freeing, it is also very scary, especially since I was making the quilt for a book.  I wanted to please the author and make a quilt she would be proud to have in her book. It felt like she had specific ideas about what she wanted but she wasn't going to tell us!

Eventually I decided to let go of the idea that it was a quilt for Sherri.  I was going to make a quilt for me, since it would stay in my house.  Once I stopped trying to please someone else, the flow worked much easier for me.

The other thing that blocks me - the reason that this is my first improv quilt - is that improv quilts aren't conventionally beautiful.  This means that when I hang it up in my living room, my guests ignore it or glance at it without making a comment. I 'm sure they were wondering, "What was she thinking?!"  I enjoyed the process of making it, and I love the quirkiness of it, but I don't particularly like the aesthetics of it.  Sherri Lynn has featured some antique quilts on her blog and has tape recorded some conversations as she studies the quilt.  I like the idea of really studying a quilt instead of just looking at it and saying "pretty".  I think improv quilts tend to lend themselves more to this kind of in-depth study than traditional quilts do.

Both of the quilts shown on this post were made without a pattern. One has straight lines made with a ruler. The other one is cut free form.  They both let me be free and play.  I used lots of colors on the rail fence quilt. Lots of leftover fabric. But I also added some color as I went along, as some days I wanted to add a different flavor based on my mood. The one on the right has a more limited palette, but the play was in the design choice.  They both held my attention long enough to get to the finish stage, which says a lot to me.  They are both complex quilts - the rail fence with the variety of scrap fabrics used and the interplay of the different fabrics, and improv quilt with the interplay of the lines coming in at different angles.

I have a feeling that the quilt that will go down the generations to represent me will be something that many people found ugly and tucked in the back of a closet or the attic.  Centuries from now, people will wonder about the person who made this ugly quilt.  Would I want one of these quilts to be my legacy? I don't think so, because they don't completely represent me. But then, neither do the ones that are more conventionally pretty.

Neither one is traditionally beautiful.  This means that most people will glance at them and walk away.  Not worth their time.  Both of the quilts require more study and analysis before the beauty becomes apparent.  I think the people who walk away at first glance are missing out.

Posted by Shasta Matova at 1:21 PM No comments: 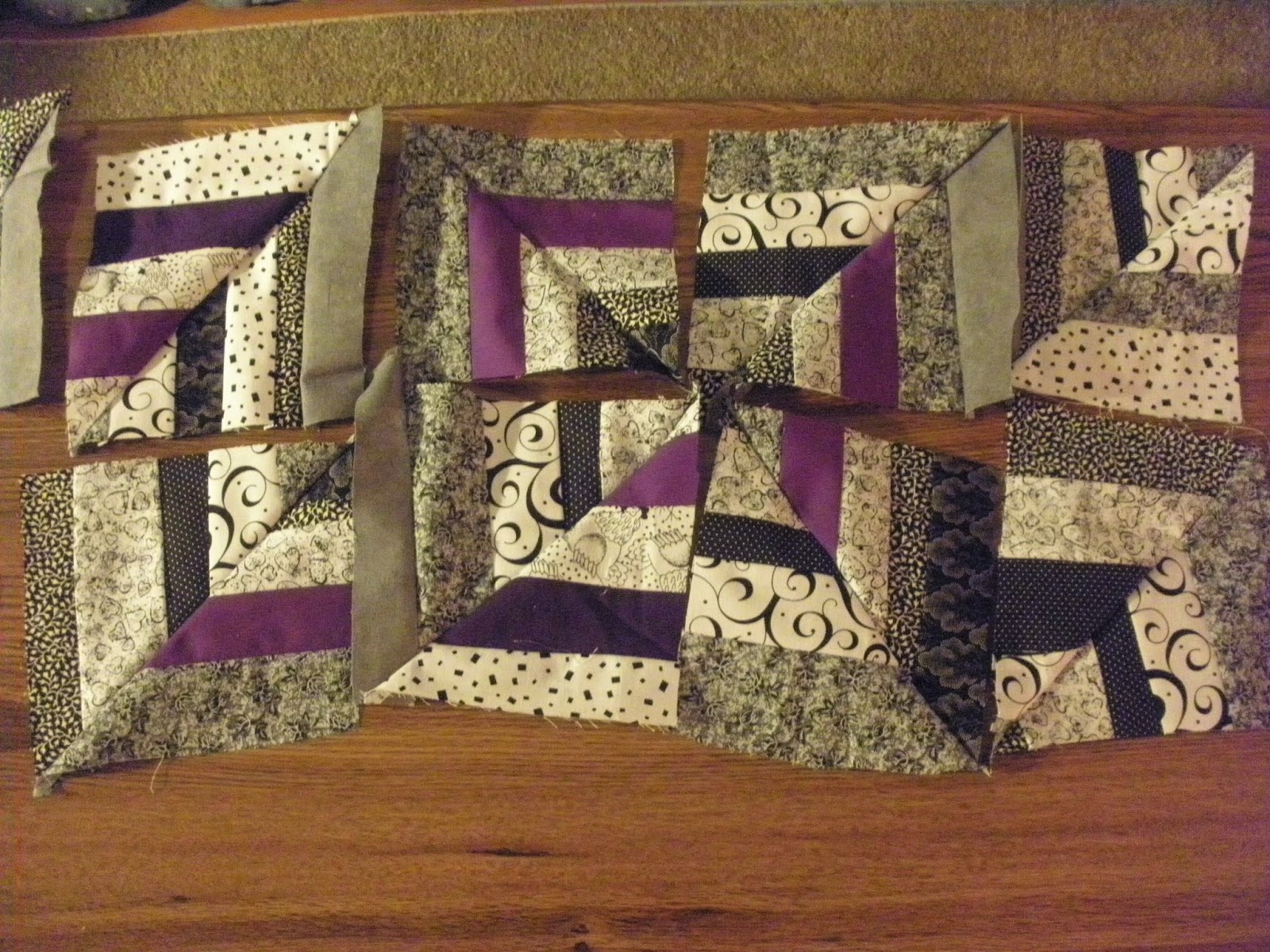 is available for pre-order on Amazon.  It officially comes out March 17, 2015.  What this means is that I can now reveal the improv quilt I made earlier this year. Forgive the photo heavy post. I've had a lot of time to take pictures of this quilt!

As I said earlier, I was one of the testers of one of the patterns in this book.  My quilt didn't make it in the book unfortunately, but I appreciated the opportunity to participate. This quilt was all about rhythm.  The score of this quilt is rhythm. I kept my palette very simple with just black and white. I wanted an accent color. I was debating between red and green, but my daughter recommended purple, and so I went with that. I think it was the best choice. 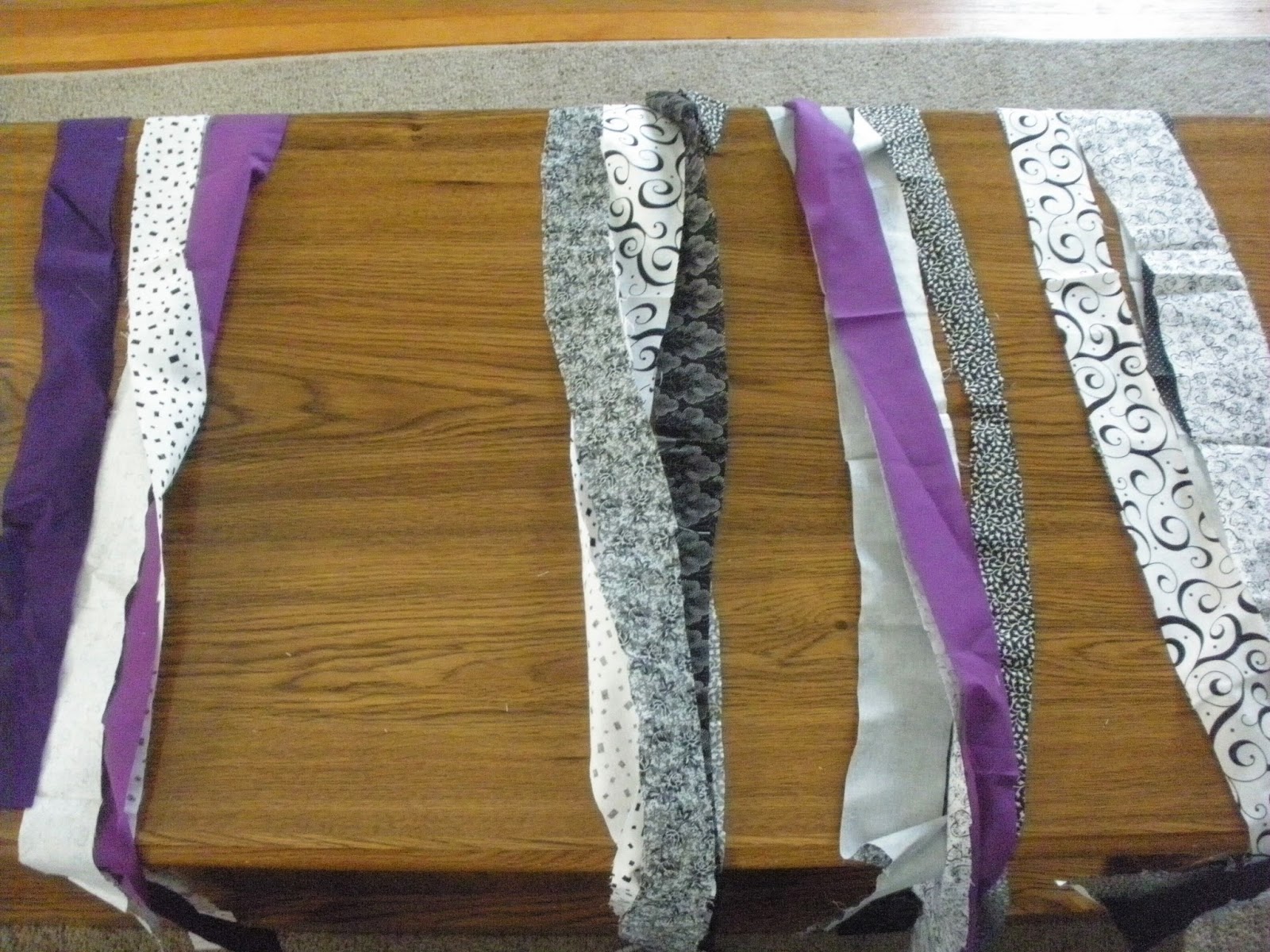 We were to make striped fabric by cutting the fabric into strips free form and then make a quilt out of it.  I deliberately kept my strips from being too straight, not that I would have been able to cut straight lines without a ruler. 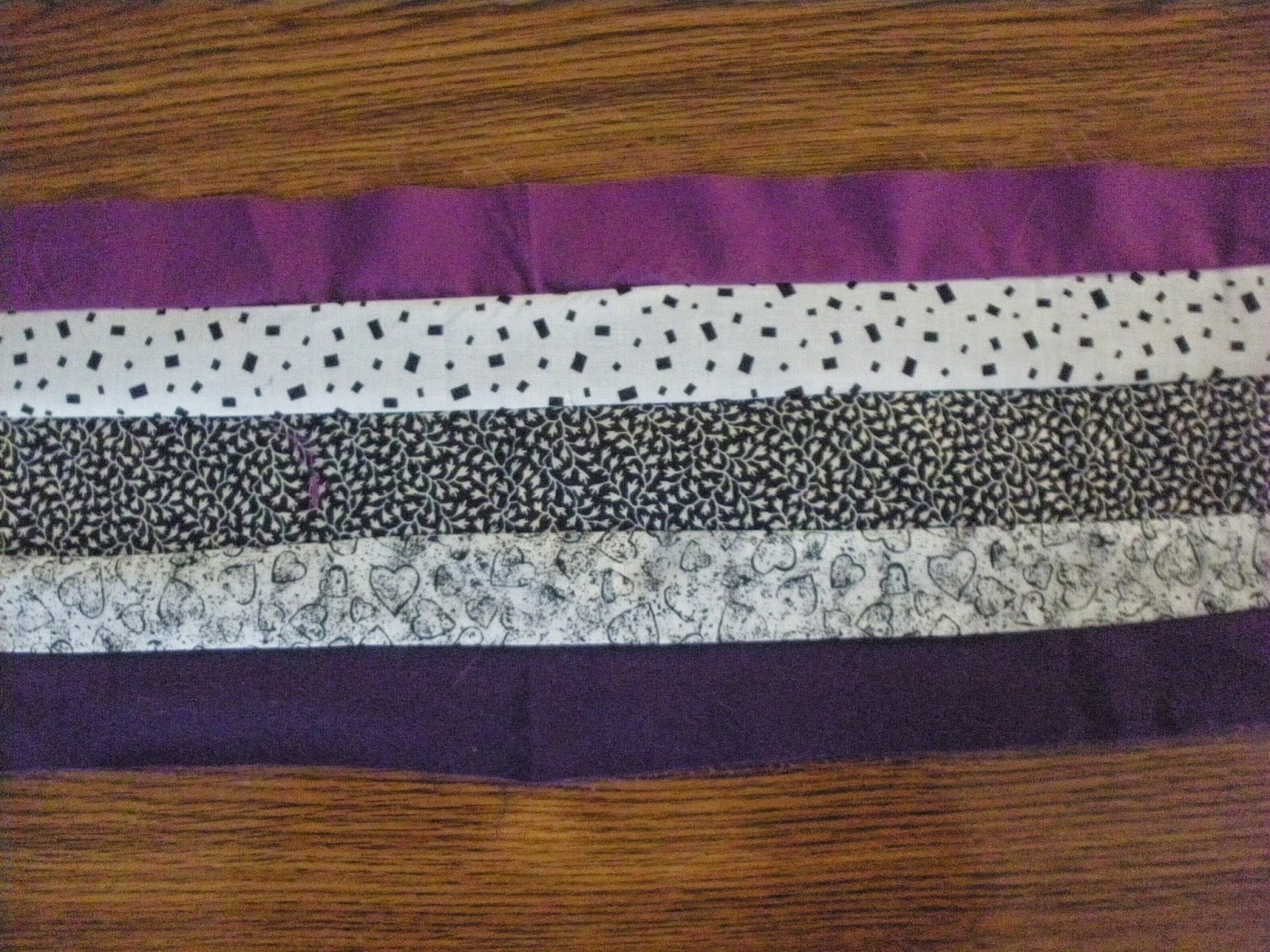 I cut the strips in half so I could get variety in mixing and matching.  Then, I sewed them together into stripes of five fabrics.  I made some deliberately dark, some deliberately light, and some medium. I think I had five or six rows. 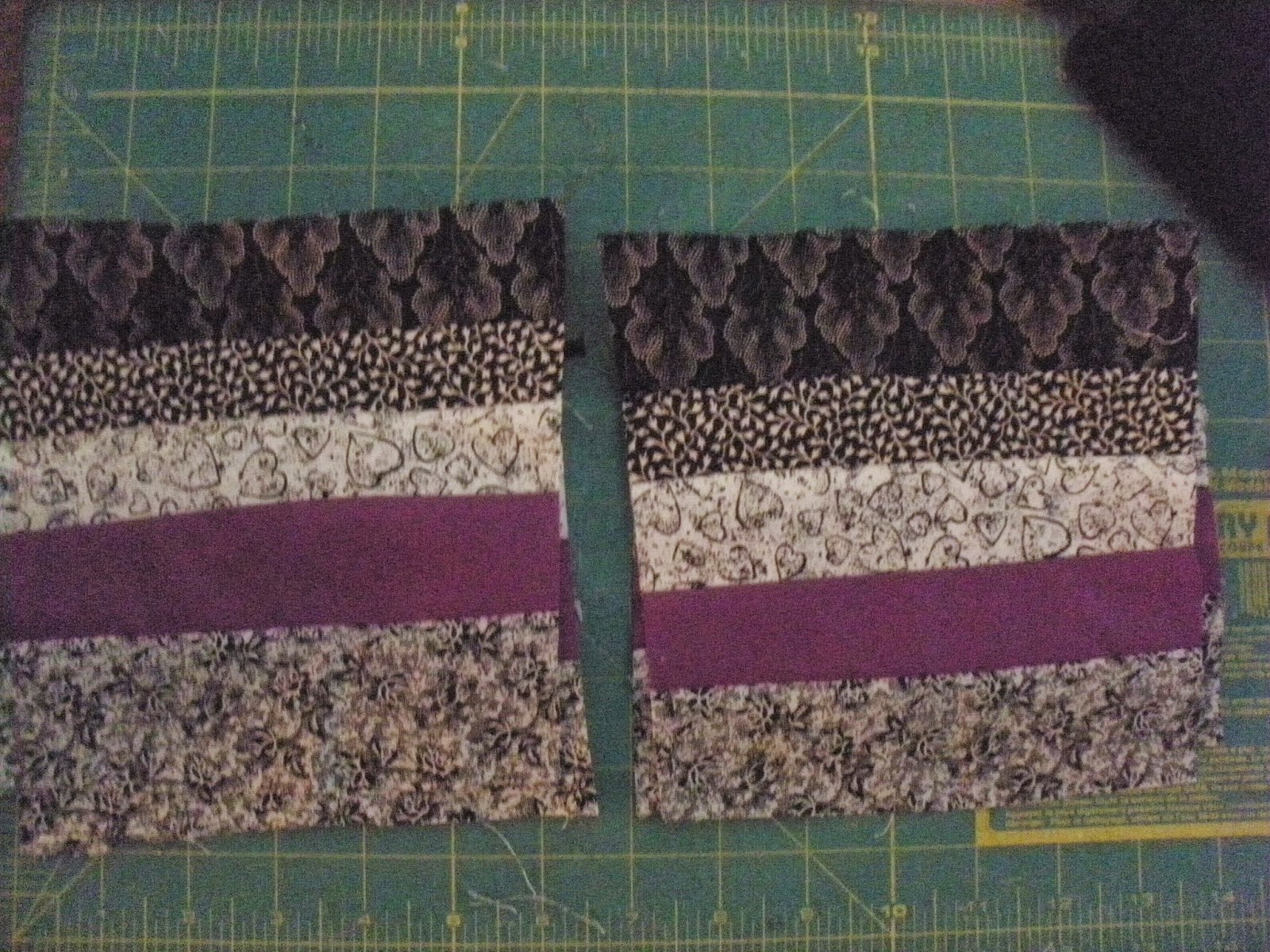 I cut them into squares.

Then I cut them in half to make half square triangles. 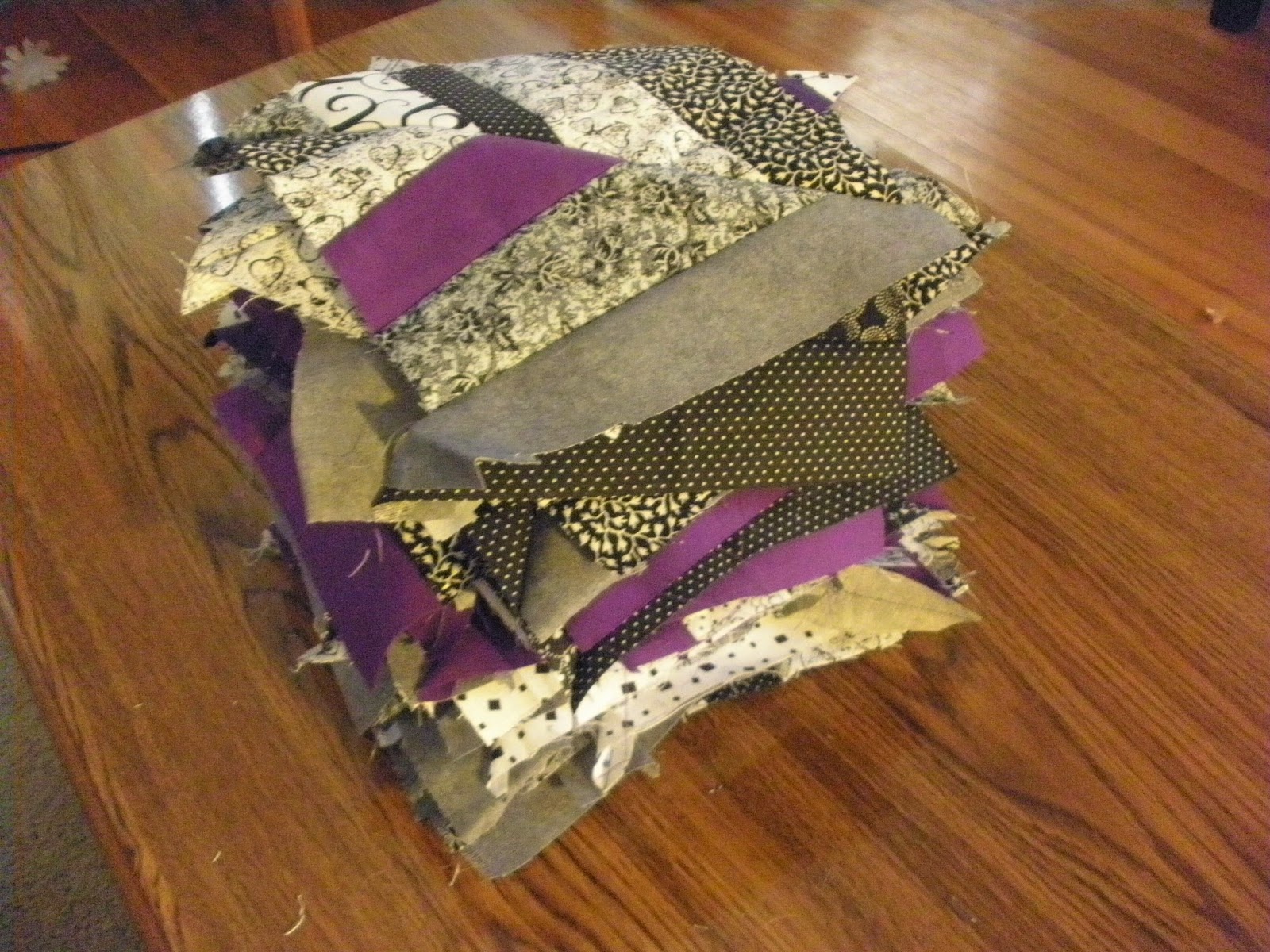 I mixed and matched the HSTs so that the would meet at an angle and look like L's.  I sewed them together and stacked them up. 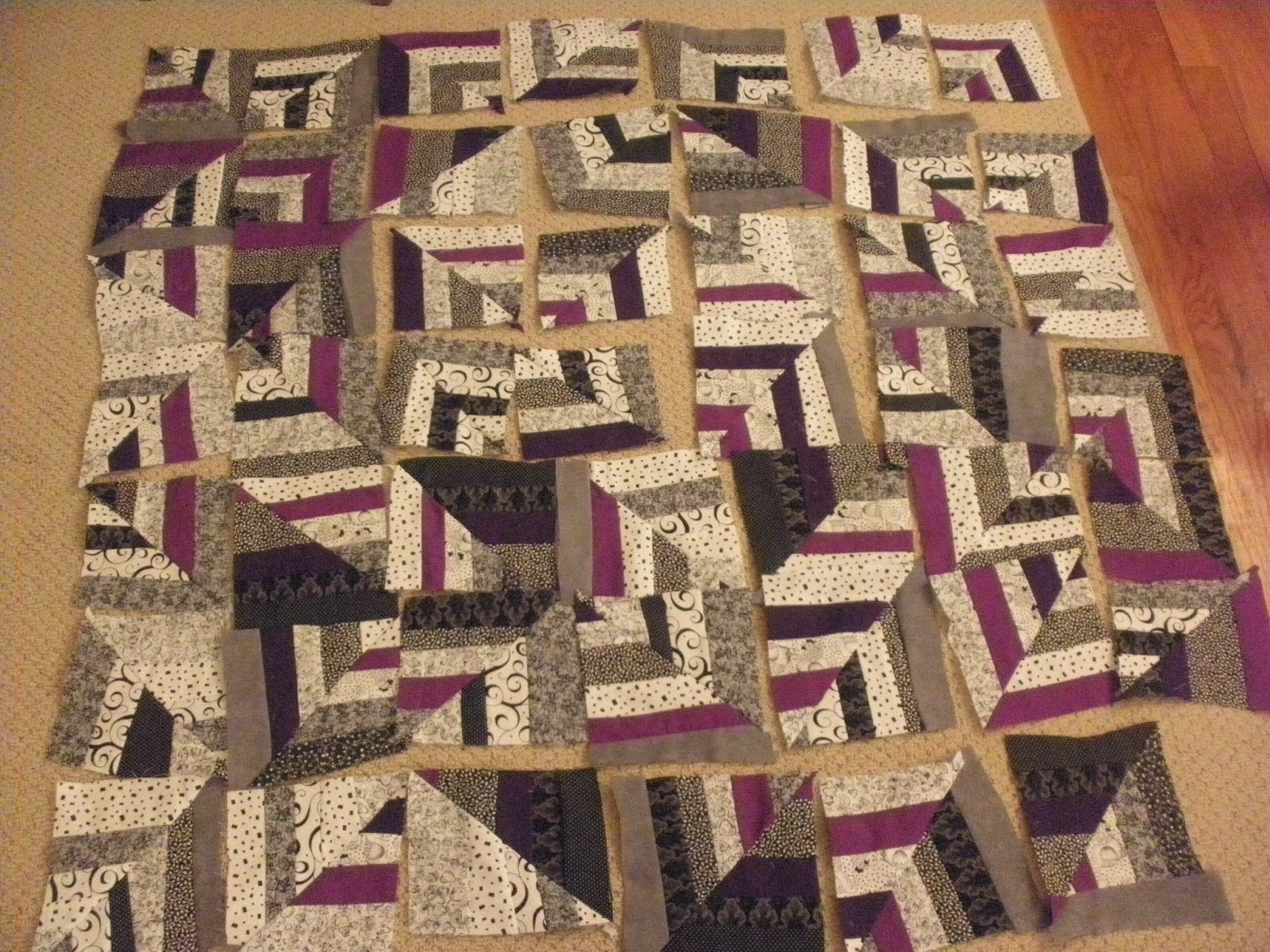 I tried to keep it improv, so I didn't do too much arranging, but I did put them on the design floor to see how it looked. Also since I used the floor in a room that did not have the sewing machine, I was able to keep it improv and free form. I sewed blocks together to make rows.  Sometimes I would have to add more fabric to get the blocks to fit together since they turned out to be different sizes. 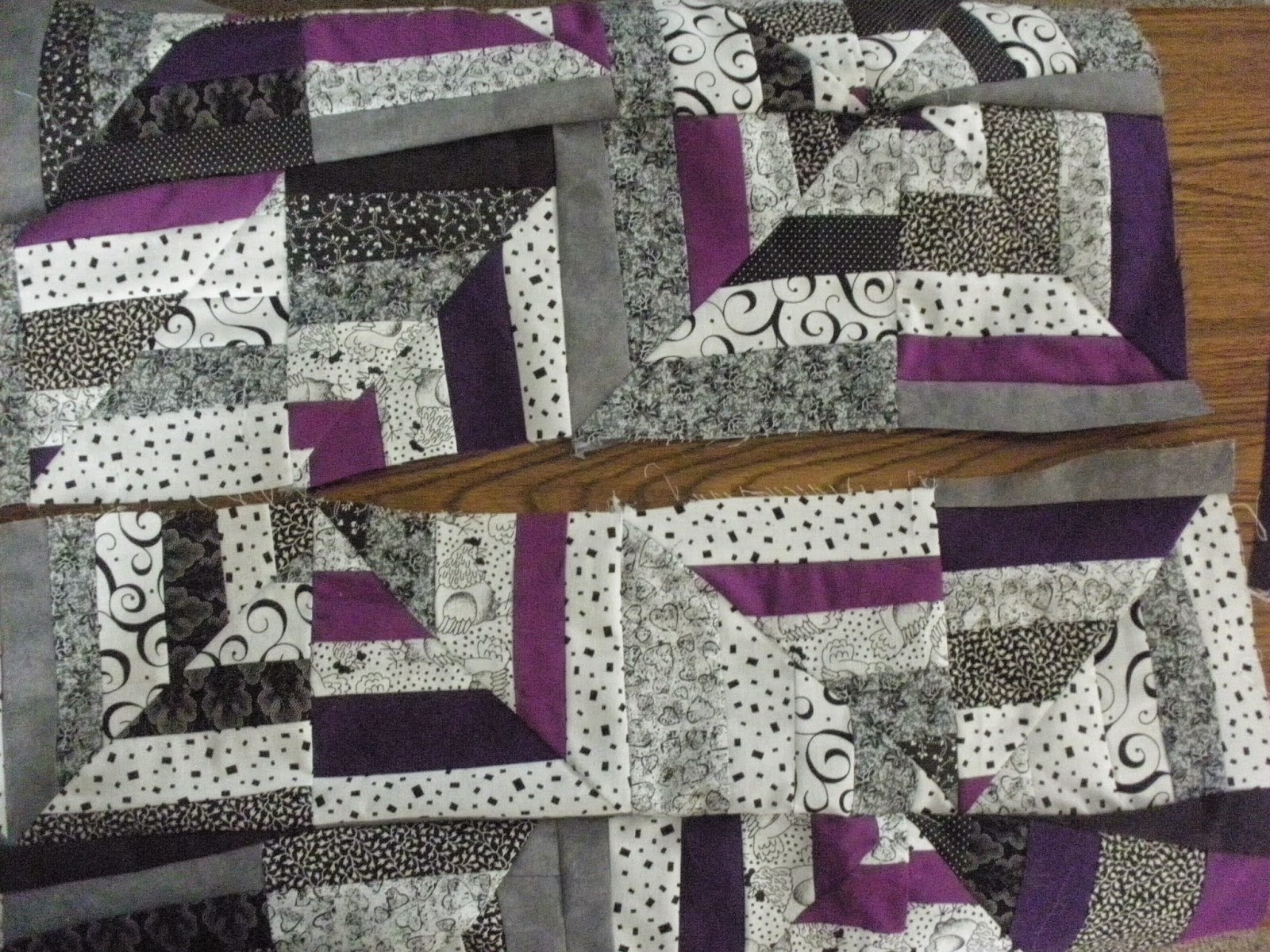 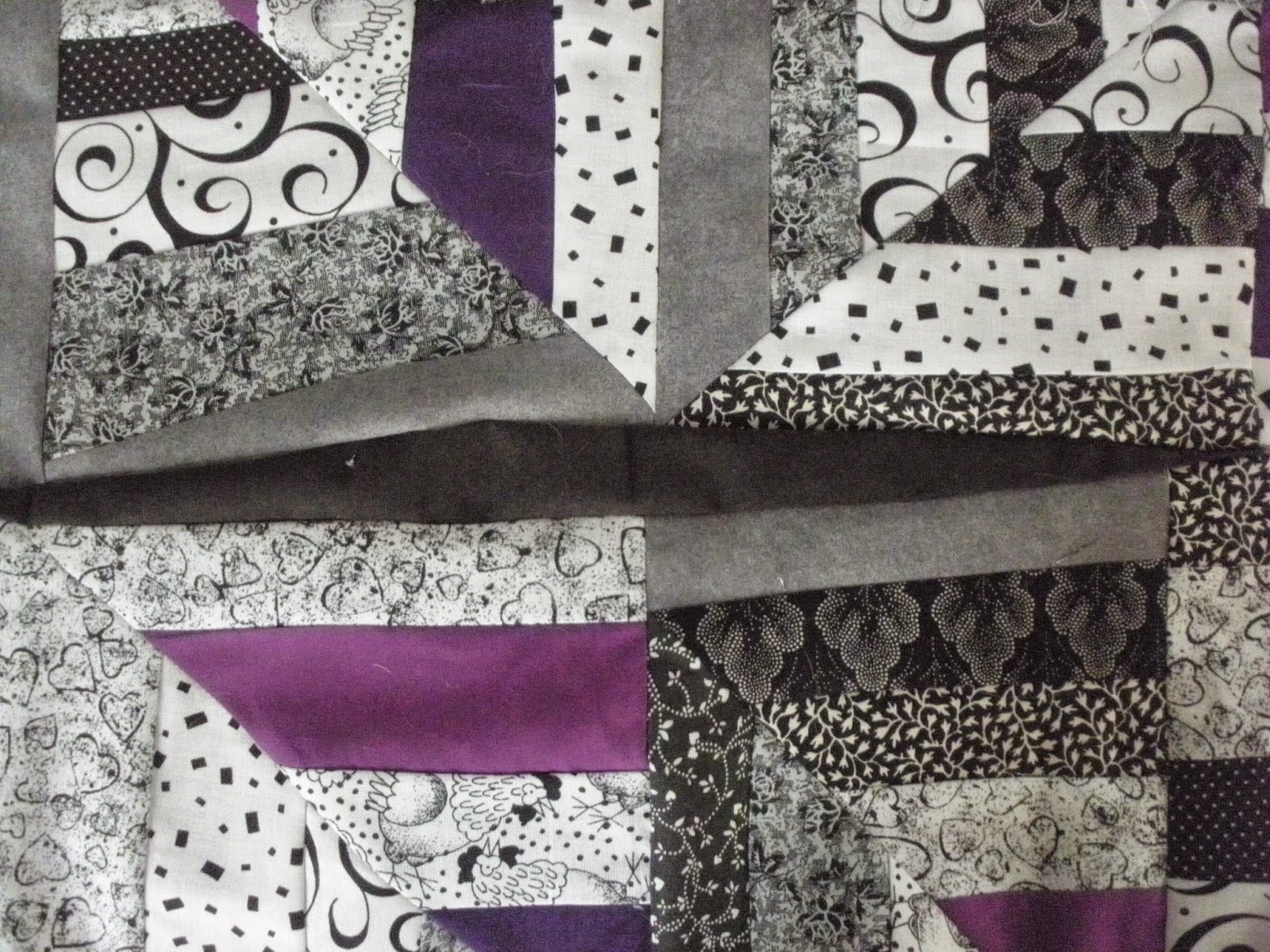 After I had all the rows together, I had to try to make the rows fit.  This meant I added more fabric where there were empty spaces.  I wanted a bigger quilt, so I tried to add more than trim away to get them to become the right size. 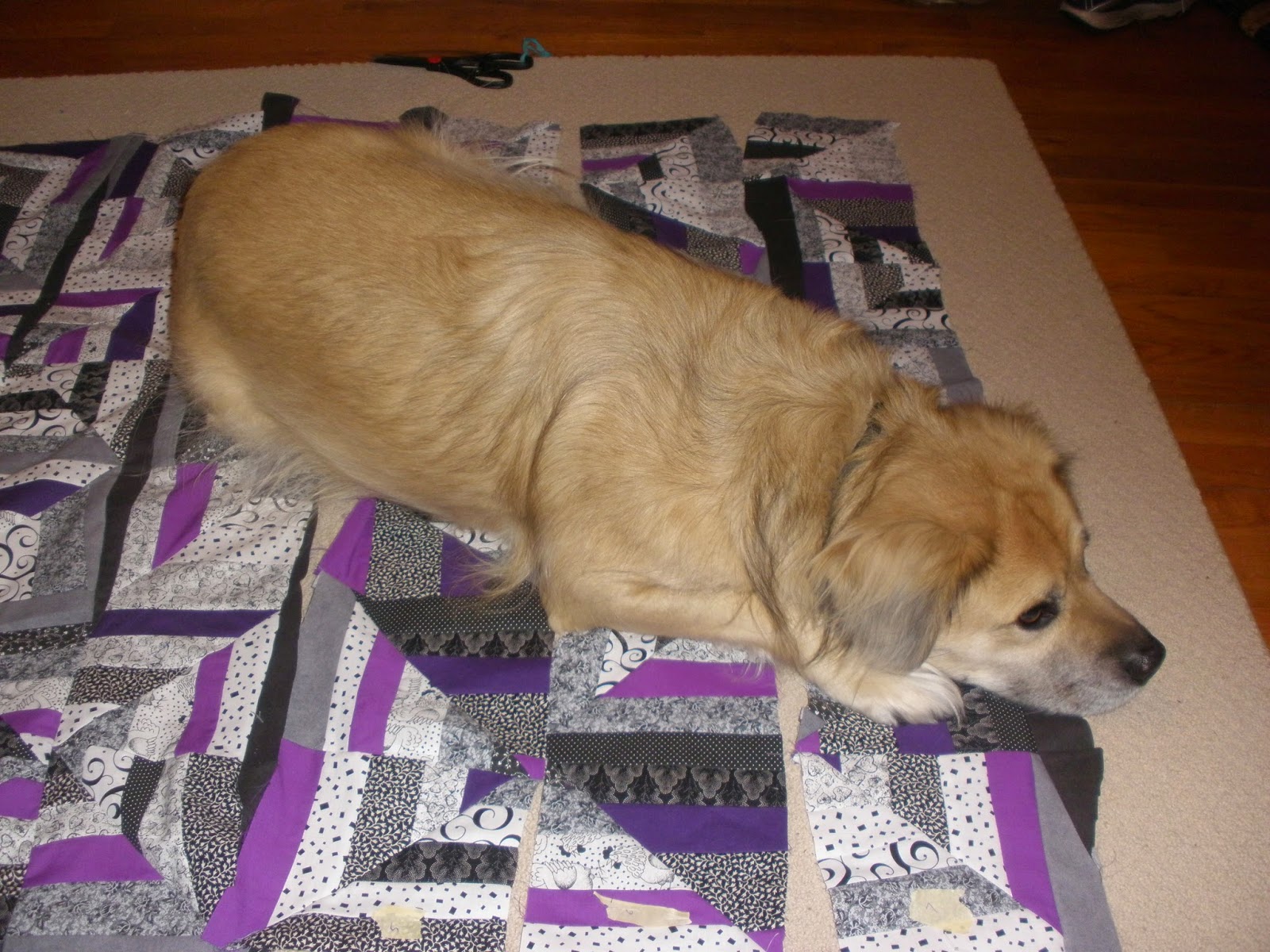 Zeus helped make sure the quilt didn't escape while I was working on it. 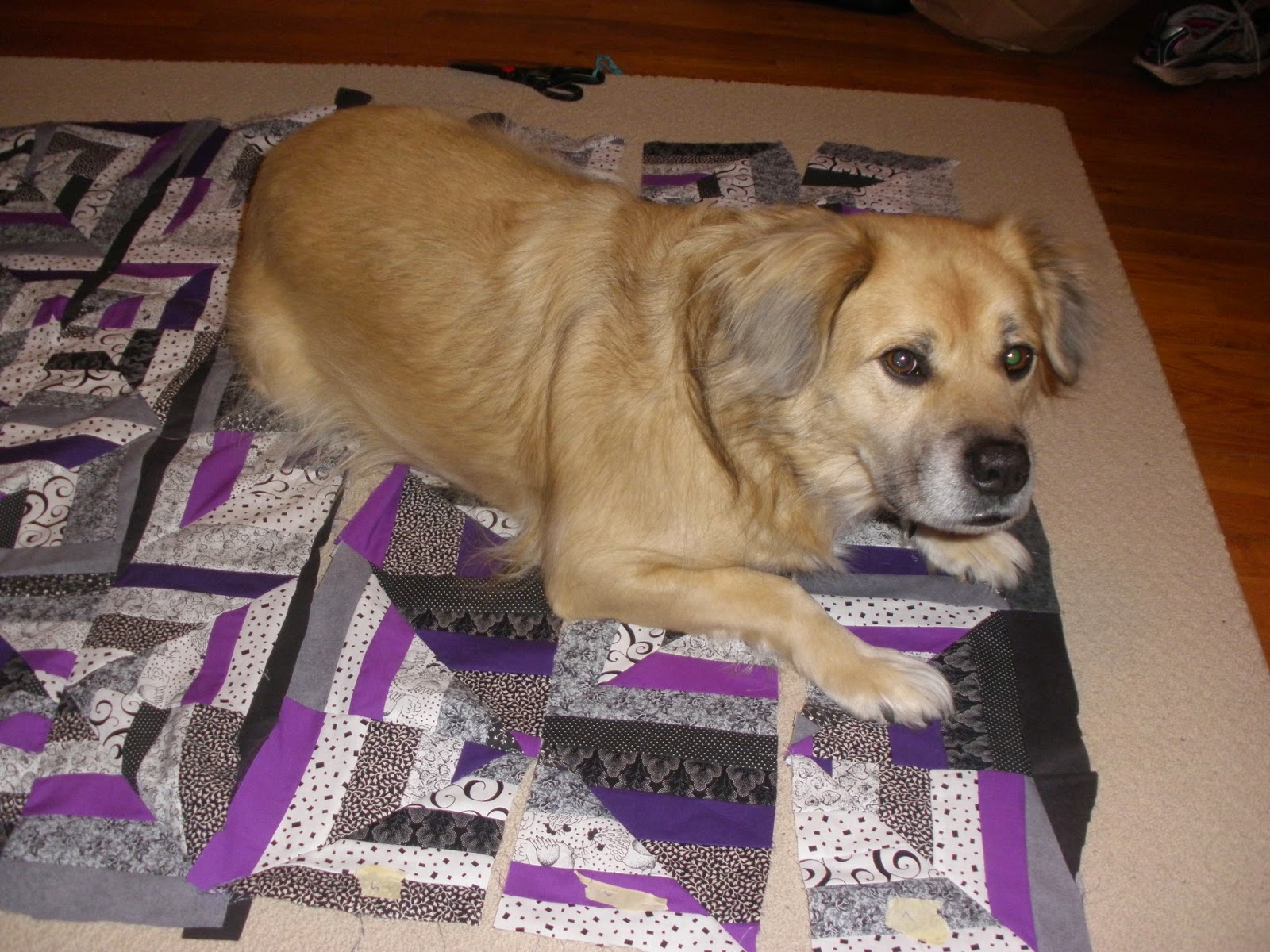 After all the rows were joined, I had to add nips and tucks where the quilt was lumpy.  I did this several times, putting the quilt on the floor to make sure it was as flat as it could be. 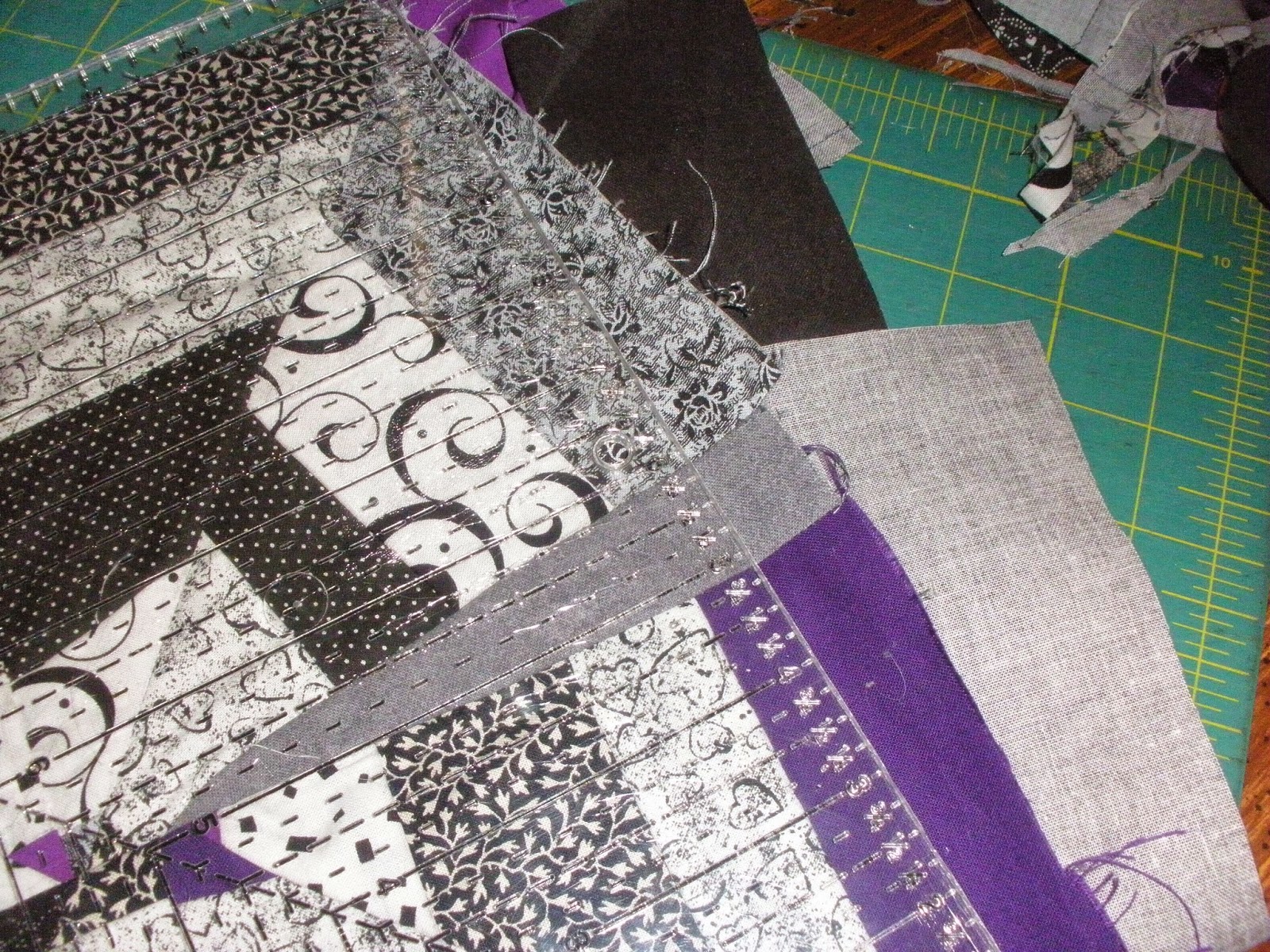 Squaring up the quilt was the hardest part, since there wasn't a single line that was straight that I could use. But I folded the quilt and cut to the smallest space, but sometimes I added more fabric to help make the difference.  I quilted it with straight lines using a squiggly stitch my machine provided.

I like almost everything about this quilt. It isn't conventionally pretty, but I like it.  The dark spot on the bottom right (second to bottom row) where the nine patch and the maverick block run together bothers me sometimes, but they do add to the improv look of it.


My sister and I took a couple of my quilts to photograph on some construction equipment.  Now I can finally show these to you. Which one is your favorite quilt walk photo?


I hope you enjoyed seeing this quilt reveal. I have waited anxiously to show it to you.
Posted by Shasta Matova at 5:55 PM 5 comments:

This is an old post I found in my drafts folder. I decided to publish it even though it is late, since it will give you a chance to get the history behind the quilt I will be posting.

Sherri Lynn Wood at Daintytime put out a call to participate in her new book on improv quilts, and I have signed up.  She has about 20 people who have signed up to participate for each quilt, and only one or two quilts are likely to be chosen to be in the book.  The person whose quilt is in the book will get a free book, and the others will be put in a drawing for a chance to get the book.  It is exciting to be a part of a project like this - to try out some new techniques. She gives some general guidelines, and we have to interpret them into fabric.

I am not going to be blogging about the process of making the quilt until we get the go ahead from Sheri Lynn, but I did want people to know about it and generally know that I am planning to participate.  I haven't cut fabric without a ruler. I've made a couple quilts without a pattern - just winging putting different shapes together, but I wasn't sure how to get those curved spaces in and still wind up with a flat quilt. She provided us with a great video that showed how easy it could be. I am excited about doing that part.

While that part seems freeing, it also seems restrictive.  Not because of anything she did or said, but how I feel about it.  I want a quilt that winds up looking appealing, and at least stand a chance of being good enough to be in the book.  I like those improv quilts that really show the free spirit of the quilter, but I've also read others complain about quilts that look like fabric throw up.   So I am waffling right now trying to decide what fabrics to use, and what direction I want to take this quilt.


On the other hand, it is also freeing knowing that there are so many people who are participating.  If my quilt turns out awful or if it somehow gets stalled, there are others whose quilts will be made, and will be better than mine.
Posted by Shasta Matova at 4:03 PM No comments: