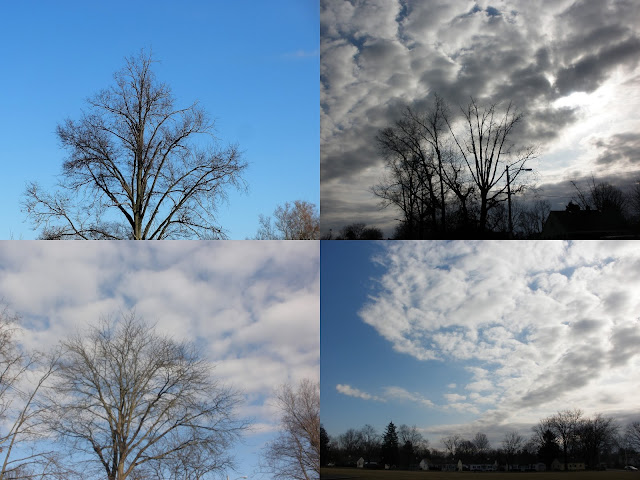 I made this collage in February, but haven't shared it with you yet. Since I don't have any quilting things to show you, I thought I would show it to you. I take a lot of these types of sky pictures.

This collage is unusual in that all of these pictures were taken on the same day, in the same twenty minute period.  It was a beautiful day, and it wasn't until the way home that I noticed the dark gloomy clouds.

It was all a matter of perspective. You could choose what kind of day you were having by choosing what part of the sky to look at.
Posted by Shasta Matova at 8:17 AM 5 comments:

I have all but one of the daisies quilted. Before changing thread for the last daisy, I wanted to catch up on some circles.  This explains why I need to have "Finish" as my motto this year, doesn't it? 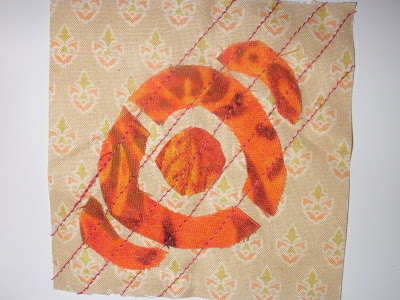 There isn't much of a story to this one. I felt like working with an orange scrap and this is what I made. 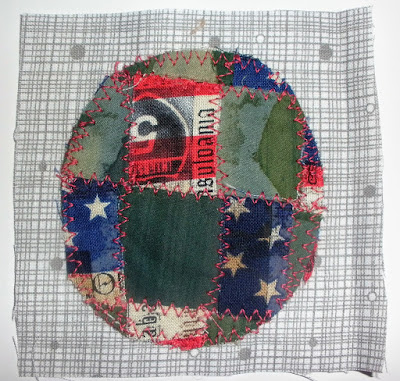 This one is woven. The green batik makes me think of army colors, and the red/white/blue fabric seemed like a good match for it.  Celebrating a holiday before its time is a good rule to break. 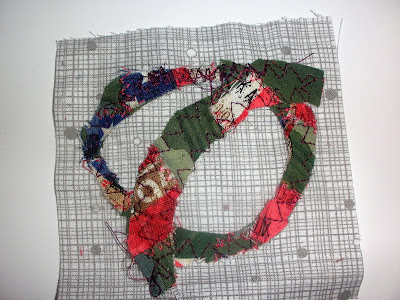 This is using scraps from Block 118.  Since this is a rule breaking quilt, I like the idea of having circles with slashes in them to say "Don't."  This slash is curved since we are bending the rules in this quilt. 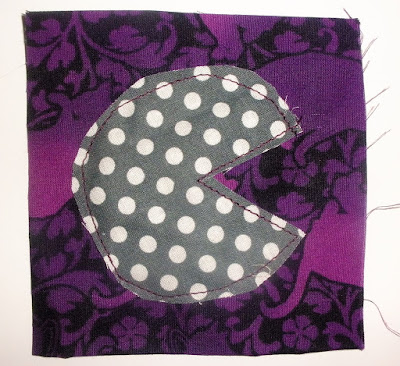 This Pacman block is inspired by Twiggy and Opal's recent finish. Jayne used solids in hers, but I used only what I could find in the scraps box. It's also a fitting block for Pi Day (3.14).

I've been doing plenty of quilting on the daisies quilt. It is going much better now that I have adjusted the tension, and have relaxed a bit. Thank you everyone for your advice. I have sewn down 11 of the 16 daisies. I have been changing the thread to try to match the color of the flowers and have the purple and the pink ones left to do. 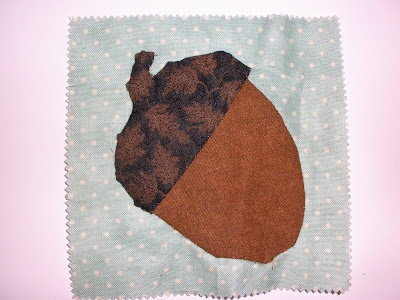 This means I have met my One Monthly Goal, which was to quilt 8 of the 16 daisies, but I think I will go ahead and sew the rest of them down this month too. I still have to do the background to do, but I don't think I will have time to do that this month. 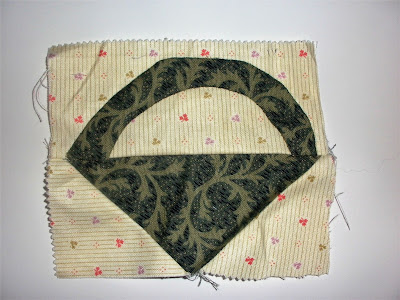 I have also been trying to clean the sewing room. This is always a hard task for me to do, as all that new fabric makes me want to start a new project, and the older ones beg to be finished. Since I wasn't about to adjust the machine for regular sewing when it is set up for free motion, I did finish these two blocks that just needed a bit of hand applique. These blocks are from A Life of Plenty. I worked on them during jury duty last year and hadn't put them back with the other Life of Plenty blocks.

Email ThisBlogThis!Share to TwitterShare to FacebookShare to Pinterest
Labels: A Life of Plenty, daisy's chickenpox, quilting

I've started quilting the Daisy's Chickenpox quilt, and when the machine is set up for free motion quilting, the production of the 365 circles has slowed down. I still have a few to show you though. 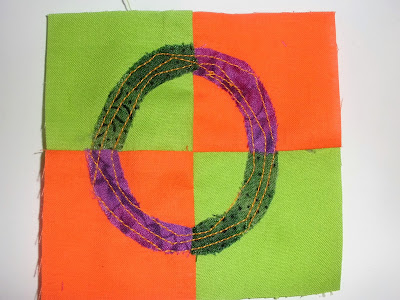 A four-patch with quarter circles appliqued raw-edge style. Orange thread is in the machine because of the quilting and it matches here. 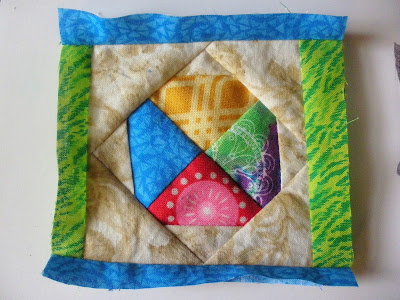 Another design that starts out with a four patch, but this one goes way beyond that. Most of the border will be hidden in the seam allowance so very little will show. 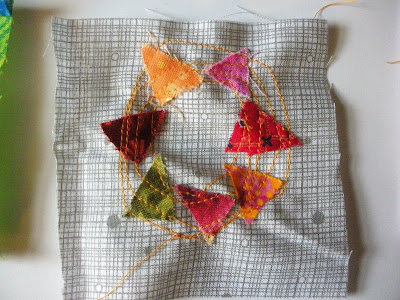 I know I've done circle of triangles before, but it looked really good last time and I enjoy using up these pretty little scrap bits. I was thinking about making a snippets quilt, but I think I have enough WIPs. 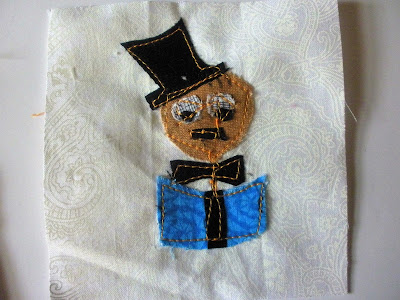 One of my friends from HubPages, Mark Ewbie, drew a drawing of a woman looking on as a man was reading the directions.  I really liked it, so I cropped it and recreated it in fabric.  There was a quilting challenge to make something with the theme of reading, and since I didn't want to start a new project, I could at least satisfy myself that I did something about reading in my quilt. 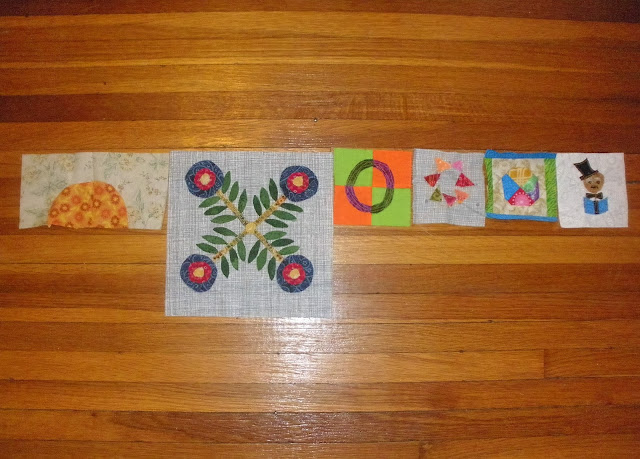 Here's the layout of this week's row. I haven't sewn these together yet.

I have secured the applique on all of the blue and yellow sections of this block, as well as all the 1857 blocks. I am doing them assembly line by color, to avoid continual changing of thread on my machine.  I still have to do the green (once I get some green thread) and the red. There is going to be a lot of starts and stops for the leaves on this block.

Before I show you the quilting on the daisies, I need you to turn into a man on a galloping horse.  While you are at it, you might as well choose to be an unobservant man.  Get on the horse and gallop really fast, as fast as the horse can handle.  Are you ready? 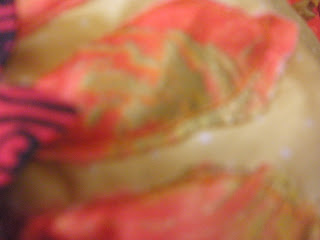 All right, I will show you a clearer picture. 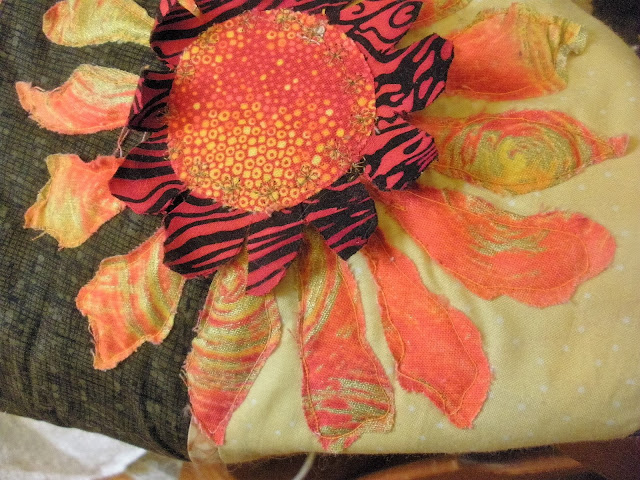 I've quilted a couple of the daisies down.  I am facing several issues in doing this.
On this quilt, the tension isn't right.  The top thread is flat while the bobbin thread goes in and out.  I think this is a function of not coordinating the machine and hands correctly, but only practice will help with that.  I am hoping that I will get better as I go along, and then I will take out some of the particularly bad stitches and try again. I think I will switch to a practice piece for a while. I might have to think of some walking foot quilting for the background too.

Question: Is this type of tension problem just an issue because it doesn't look good, or will it come apart with washing and use?  Just trying to figure out how important it is to fix it.

I have started sewing the scrap quilt, and wanted to show you what I am doing. 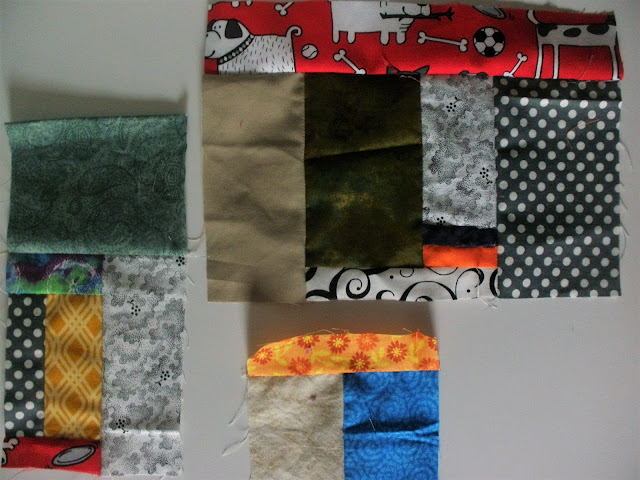 That's all the progress so far.  I've called it Scrap Vortex but I'm not really following along with the directions.  The way I am making it is to cut all the scraps on the dining table into rectangles.  Now I am sewing them together by size.  While I am trying to balance lights and darks, it is only the size of the piece that determines where it will be placed.  Since these are rectangles, I do get to decide which side of the piece the new piece will be.

The plan is to use this quilt as a Leaders and Enders project, but it does take more time than mindless piecing since I have to find the right size piece to add.

I do like how it is coming together though. It seems very calm compared to the 365 quilt, which is a good thing. 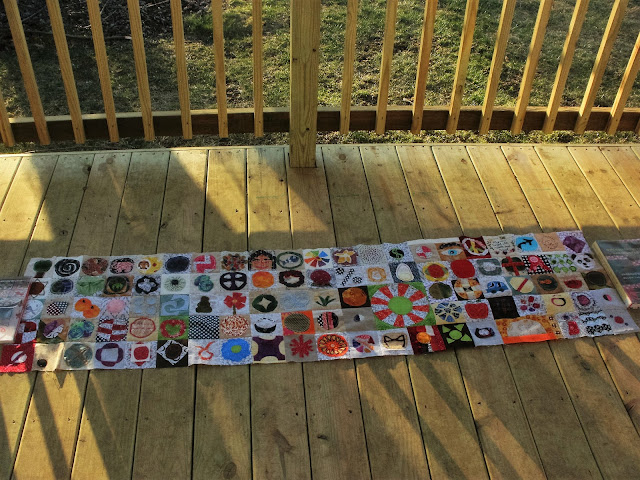 Do you remember when I showed you my progress on the 365 Quilt last week?  Look at the seventh block from the left in the last row. It wasn't until I posted it that I noticed that the orange ribbon is upside down.  It surprised me that it took almost three weeks to notice that. I noticed it as I was about to press the publish button for that post. I decided not to fix it, because it is a rule breaking quilt.

Then someone commented on the post and I looked at the post again to make sure I knew which post she was referring to.  It wasn't until then that I noticed that the off center circle was on the bottom left instead of the top right like I was planning to place it.  I took a closer look at that row and the glasses are also upside down. The sunrise/sunset circle and flower vase are correctly placed.

What happened is when I added the third week to the previous two weeks, I knew I wanted to add to the red block.  But apparently there was red on either end of this piece and on the way to the sewing machine, the quilt decided it had other ideas and third week's blocks got added to the wrong red block.

Apparently, I broke more rules on the left side of the quilt than I knew! Yes, they are staying that way.
Posted by Shasta Matova at 11:01 AM 7 comments:

One Monthly Goal for March

My monthly goal is a quilt that has been sandwiched and ready for quilting since December of 2013.  It really doesn't seem like it was that long ago.  It doesn't have as many safety pins on it as I thought, but I want them back anyway. I need them to be able to quilt other quilts. 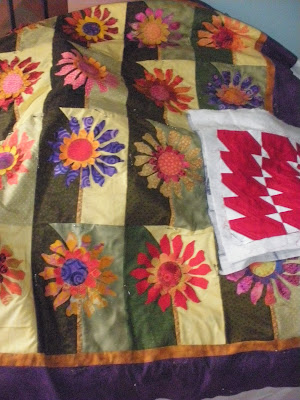 This is the last picture I showed you.  Even though another quilt is in the way, you can see the colors pretty well in this picture.

It is threatening to rain today, so there won't be any glamour shots, but at least you will be able to see the current status.  It will make the final quilt reveal more exciting. 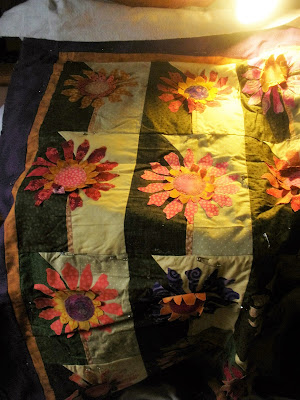 This quilt is one of the few quilts I have made using a kit.  I didn't have any batik fabrics at the time so getting a kit was very helpful.  I did have to buy the background pieces, which required some time, since I was getting them slowly, one fat quarter at a time from the quilt shop.  All of the fabrics has dots on them.  The pattern is called Daisies Do Tell, but because of the dots, I call it Daisy's Chickenpox.

It sat kitted for a long time before I got around to making it.  I wanted to use the batik fabric leftovers for other things and decided I'd better get this started and done before all the fabric disappeared.  This picture is proof that the top is pieced and sandwiched. 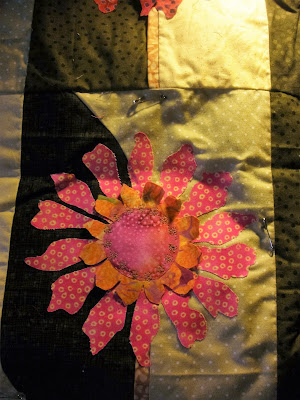 The inner row of petals are two layers that have been fused together so that they can be seen on both sides. They are supposed to be free like that.  The circles have been sewn through both the inner and the outer sets of petals using embroidery stitches on my machine. I don't remember if they are also sewn to the background or just fused in place. Some of the fused outer daisies are peeling off, which worries me, but hopefully sewing it down will hold it secure.

This is a lap quilt, but I am not sure I will be able to finish it by the end of the month.  I am planning on using free motion quilting to secure the outer petals and add quilted leaves to the stems.  Maybe a stippling stitch in the background.  This is a big step for me - free motion quilting period is a big step for me - so making any progress will be a step in the right direction.  I'd like to get all of the quilting done, but I can't promise that I will finish in March.  I should be able to do at least half of the flowers done.

I have plans to do a thorough spring cleaning and want to limit how much time I spend quilting.  I also have the daily circles and BOMs to try to keep up with.

Linked to:
One Monthly Goal