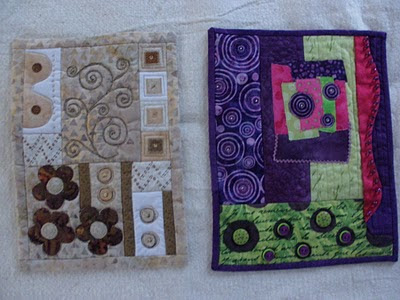 Kate has been hostessing Another Little Quilt Swap for a while now. The beauty of this swap is that you are only officially entered when you have actually made your little swap quilt.  If you make the quilt, and decide you can't give it away, no biggie, keep it.  If you haven't made it, and don't have the time, you don't have to rush through it just to honor your commitment. The quilts are posted on the blog and we make a list of the quilts we would like to receive.  Kate does her magic (and lots of hard work) to decide who gets which quilt and lets us know where to mail our quilt.  Then we sit back and wait for the ones we get.  Which comes pretty fast, because you don't have to wait for them to make the quilt, just mail it off. 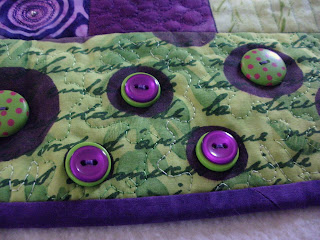 I entered the maximum of two quilts, and have received my swap quilts.  Ooh, they are both so beautiful.  And they go together so well. Each quilt is beaded and has so many intricate tiny details that I could look at all day. And maybe steal a few techniques from, as well. 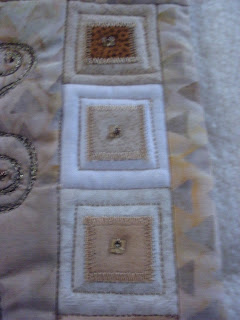 There is applique and piecing and fabric choice and batiks and fusing and folding and beading (and layering of beads) and buttons (and layers of buttons) and rickrack and overlapping and shiny threads and shiny beads and machine and hand quilting and combinations of different quilting designs. So many beautiful techniques combined so beautifully to make two very different but gorgeous quilts.

And they are now MINE!  Thank you so much Margaret and Lisa! And Kate!
Posted by Shasta Matova at 9:49 AM 4 comments:


I had been planning on cleaning the basement all summer.  I did a few boxes here and there. Put together a couple of boxes for charity and promptly forgot about them when the charity called.  Threw away a couple of boxes.  But I was having a hard time making decisions about what to keep and what to throw away.

Then I had a dream.  I dreamed I got married to someone I didn't know very well.  One day, he came home and found me taking out the trash. He said, "what are you doing?"  in a gruff way.
I thought it was pretty obvious, so I said, "It is Odor Removal day.  Anything that smells - dishes, laundry, change bedsheets, clean out refrigerator, that sort of thing gets taken care of."
He said, "taking out the trash is a man's job."
My first reaction was to stand up for my rights.  After all, it is my house, my trash, and I have been taking care of my own trash for all these years.  But I got smart.  Here was a man who, not only was offering to take out the trash, but forever after-wards.  I shut up and handed him the bag.
While he was taking out the trash, I started worrying. What if he is one of those men who forgets his duty. I've read about wives who have had to put the trash where he will trip over it, so he will remember to take it out.
When he came back, we discussed it, and he said "how about we just do what we do, and at the end of the week, we can have a family meeting and see what needs to be changed."
It sounded like a good plan, so that is what we did.  I showed him my chore chart, and we took turns taking care of the things on it.
Things were going well, when at one family meeting, he wanted to discuss the chore chart.  I was worried that he wanted to talk about changing the plan, saying he was doing more than I was.  But no, he wanted to talk about the thing on the list that hadn't gotten done during the month.  That was cleaning the basement. He said he couldn't do it, because it was all my stuff, and he needed my help to make the decisions of what to keep and what to throw away.   So we set up an appointment, and together, the whole family set out to spend the weekend cleaning the basement.
Then I woke up. I'm not going to waste valuable dream time watching myself clean!

But still, despite the plans and the dream, the basement still needed work. Last week, the basement decided I had wasted enough time and I needed some motivation.  Water backed up in the basement, about 2 inches worth. It's an unfinished basement, so the only things on the floor were things I put there for storage.  I didn't want to buy more shelves or plastic containers, because most of the stuff basically should be thrown away or given away. No need to keep what I'm not really using.

After the plumber got the main drain snaked, I took care of all the boxes on the floor.  The decisions were really quick and easy.  Any paper that got wet was trash, no matter how important it might have been.  And non-paper items, I would have to clean and sterilize, so anything that I didn't feel like cleaning and sterilizing was trash. My mother and brother are helping me take care of things.  We need to clean the entire floor, so we have to move the things I am keeping back and forth to clean one part at a time, doing a few hours a day.

We have made great progress, and it should all be done this week.  I'll have a nice clean spacious basement again.
Posted by Shasta Matova at 12:50 PM 4 comments: 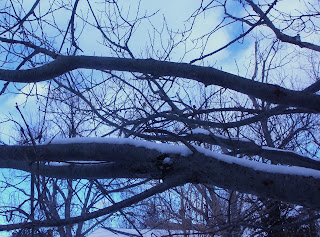 You know how some people have a hard time quilting or doing anything fun until they have their house clean and everything in order?  I'm not generally one of them.  Or at least I didn't think so.  But with the dog, there is more dog hair and dirt tracked into the house.  And I'd like to clean it before I do fun things. I feel guilty for doing the fun things when the cleaning is undone, so basically I sit around and watch tv and ignore the whole situation!

The other guilt thing is work.  I am working from home, and even though I know I should just stick to a schedule, and let my free time be my free time, I am having a hard time with that.  Especially with interruptions from the dog.  "You want to go outside in the nice weather?" I guess I could stop for that. And then I lose track of how much time I have spent working and how much I need to make up.  Even on the weekend, seeing the pile of work that needs to be done, which really looks bigger than the actual amount of work, just makes it hard to motivate myself to do any quilting.

All right, I guess I will work or clean or something  so I can get to quilting.  I am thinking of making another small quilt - before going to another UFO.  I had a lot of fun making the quilt for the swap, and I think another one of those would help satisfy my craving to do something new, as well as give me something else to put on the wall.
Posted by Shasta Matova at 9:20 AM 4 comments: 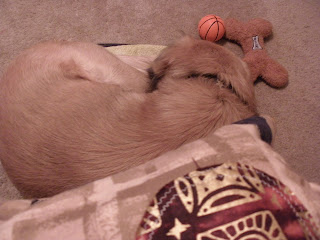 I haven't been able to think of a blog worthy post, but I thought I would stop in to say hi, and keep you up to date on the latest happenings at the High Road.

Zeus and I are getting along great.  He is getting better with his separation anxiety, and is trying to learn things like playing fetch, touching my keys with his nose, and nodding his head.  The playing fetch and nodding his head is just for fun, but I am hoping he will eventually help me find my keys.  He has to earn his keep somehow! He is hogging my quilt in the photo.

I am getting a lot of good advice from the people at work - it is wonderful to work with so many diverse people.  One of them told me that I don't need to get carpet treads for my stairs.  He said that Zeus would learn how to maneuver around various surfaces, and should be all right now.  Which he is.  He also told me I could use a leash that I could tie to a post in the ground.  I think I will eventually get a fence, but the tie-in will be nice until then.  I just need to convince Zeus that being left outside to enjoy the weather is a good thing.

Now I need to learn how to clip his nails.

*************
I received a "save the date" postcard from my daughter's school for her graduation.  I find it hard to believe that she is graduating already.

She is planning on going to graduate school.  For college, she was looking at places as far away as Colorado and New England.  Now, she is reaching even farther to the United Kingdom!  She has also applied to some more local schools (everything else seems local in comparison).

And if those things didn't make me feel old enough, I received a letter from a hospital, that, because I was a mature woman, I could attend a class about menopause.

I have trimmed the Simply Squares quilt, and it is waiting for binding.  I haven't been able to find a fabric that goes well with it, so I might have to go shopping, but I wanted to look one more time through the stash to see if if the fabric I need isn't hiding somewhere in there.
Posted by Shasta Matova at 8:03 AM 3 comments: 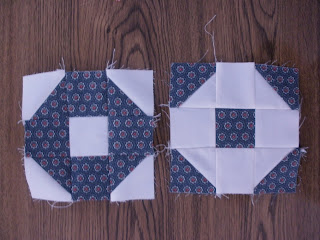 I picked up my January block late in the month and made it the same day.  I was simply debating whether I really wanted to participate.    One of the advantages of getting a late start with the January block of the month is that I could go back to the LQS and get the next block soon after.
Posted by Shasta Matova at 3:38 PM 2 comments:

Review: The Upside of Irrationality 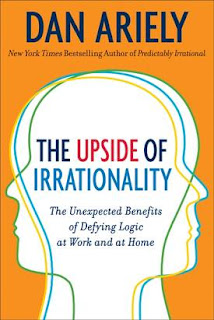 The Upside of Irrationality: The Unexpected Benefits of Defying Logic at Work and at Home

The Upside of Irrationality by Dan Ariely has been moved to Millionaire Tips.
Posted by Shasta Matova at 8:09 AM 1 comment: