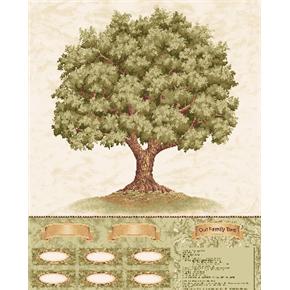 There was a place that sold family tree products. Even though I had vowed not to buy anything there, (and I want to make quilts from kits I already have)  I got this fabric panel from Fun Stuff For Genealogists. It also came in kit form.  I think it is a good way to showcase the family or genealogy research. You put the names in the ovals, and you can either put the ovals on the tree, or you can put photos in the border and use the ovals on the picture. There are 21 ovals, so now I have to decide which family members to include. I think this would be a great gift.
Posted by Shasta Matova at 9:23 AM

Glad you got to go Shasta, it sounds like a wonderful conference. I love the tree panel you got, what a fun thing to do!