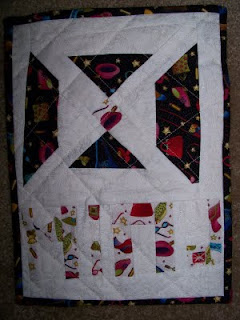 Ami Simms has been asking for little quilts about the size of a sheet of paper for a couple of years now, for the Alzheimer's Art Quilt Initiative. She uses them to raise funds for Alzheimer's Research. I've been meaning to make one - well actually more than one - of these little quilts - for this cause. When World Alzheimer's Day came, I decided it was time for me to start. I kept procrastinating over the years because of the decision making - trying to make something pretty by someone else's standards that someone would want to buy it. But I joined the Liberated Quilters yahoo group, and they suggested using free pieced letters. That took the decision-making dilemma out of it. I wasn't trying to make something pretty - I was just following the rules of making something with a word on it. 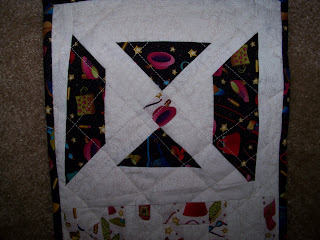 The fabric I choose was one with lots of things scattered on it - hats, lipstick, shoes, purses, eyeglasses. It seemed like a good choice. Sometimes I have an idea in my mind, and I either choose the wrong word, or I am reaching in my bag of words for the word, and the fabric just seemed to depict that kind of situation really well. For the top part, I wanted to show something that was a little off. Just enough to say "something's not right" without actually knowing what's wrong. The size of the strips used to make the pieces aren't exactly the same, and the block was then trimmed at a slight angle. I think it worked, my mother said, "Is that supposed to be that way?" 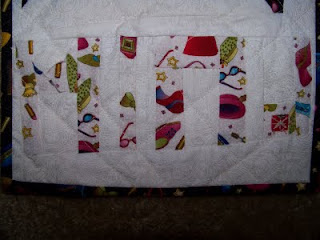 The bottom part has a word on it - I used a low contrast so it wouldn't be easy to see unless you tried. It says Mind. My nephew said "Sometimes I can see it and then I lose it and have to look for it again." Exactly what I was going for! The quilting is a wonky grid. I'll make a couple other ones, and then ship them off to Ami. I am presenting this quilt for Park City Girl's Fall Quilt Festival, because it is the last quilt I completed and I haven't shown it yet. It keeps decision-making to a minimum. I hope it encourages others to contribute a little quilt as well.
Posted by Shasta Matova at 11:48 AM

I love it! I sent in a quilt to the Alz initiative too.

That is very cool. I love the wonkiness of it and the story behind it. Good job! I think it fits the cause perfectly.

Hurray for you! It's great and boy, it looks like Alzheimer's feels! I bet my mom could see all kinds of things in it...keeping in mind that besides having Alzheimer's, she's legally blind ;) I know she'd love how it feels...and I mean that literally, as well as figuratively. It's wonky and artsy, great fabric, and...it's done!!!

Well done! The most moving exhibit I have seen this year was the traveling Alzheimer's quilts when they were displayed at the Duluth, MN Quilt Show. Absolutely haunting...you are part of a tremendous and powerful project.

I love your interpretation. Nice job!

Beautiful. Love the design, & colors. Just a delightful quilt. Thanks for sharing and thanks for participating in the Bloggers Quilt Festival.

What a lovely initiative. And I love your description of the quilt.

O wow. That is just a perfect quilt for the initiative. Thanks for stopping by the ole blog and entering in on the Kaffe Fassett fabric giveaway.

I really like the thoughts you put into this quilt, and how it all turned out. Very effective! It can be daunting to enter a quilt in such a big, national thing like the initiative, so congratulations for taking it on and finding success! For all the struggle we have with new techniques and ideas, I think we can all agree it's still easier than Alzheimers. Well done.

Anne at Film and Thread said...

I like how the word "mind" isn't overt. It is great for the Alzheimers project.

what a great concept for the word, "mind." I like it!

This is great, shows so much thought in a small piece. Hmmm, we should all be challenged to make a piece and not feel intimidated. I too have been "meaning" to do one for ages.

A lot of thought and creativity went into the planning of your Alzheimer's quilt. Ami will LOVE it. Thanks for your post and for sharing. : )