In my last post, I showed you the open book showing you my inspiration for my latest hearts quilt.  There is another picture n this post so you don't have to look for it.  It is from this book called Red White and Sometimes Blue: Classics from McCalls Quilting by Patchwork Place. 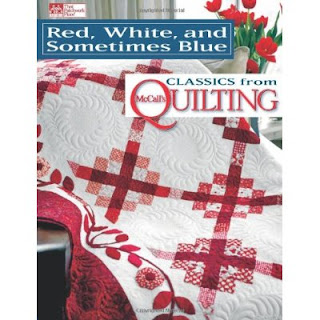 My main goal was to make something small and quick, with a modern feel to it. I decided that it would be great to have the three hearts form one heart.  I used pink instead of red because I had just purchased a BOM kit for one month, and it happened to be pink.

You know how libraries put certain books out on display to draw attention to them?  I had found a pink fabric while I was looking for something else, and I had placed it on top as a display because I wanted to use it next.

The piecing was quick and simple, although it did require some unsewing. Why did it take four seams before I noticed the error?  This would have worked great as an orphan block, leaving everyone wondering why I made a y, but I didn't want to cut any more pieces. 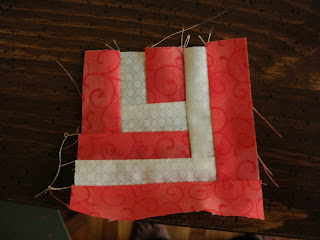 I only had three pieces of pink, so instead of looking for more or using a fabric twice, I decided to make only three hearts.  I liked the idea of using three hearts that form one heart, instead of making all six blocks. I think this design would be great for a couple with a child, or three children, or three grandchildren.  The white spaces would be lovely for embroidering in the loved ones' names or quotations. 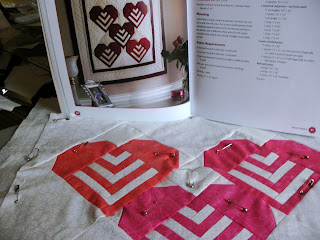 My choice to use only three of the hearts left a lot of white space for quilting. Even though the goal was to make a thoroughly modern quilt, I decided that it was my quilt and a more interesting design would be a better choice.  Besides, I wanted to make use of the books from my big book buying spree.   Instead of simple quilting, I decided to use some quilting designs from the book Sophisticated Stitches by Don Linn.


It is a machine quilting book, but the motifs work just as well for hand quilting. The author encourages adapting the designs and using parts instead of the whole, and mixing and matching. I used some parts, and was happy to see that they fit perfectly into my quilt without resizing. This decision to hand quilt slowed the progress down considerably, but it is enjoyable. This week I have been hand quilting for at least fifteen minutes every day while I watch the Olympics. I was going to use white or cream thread, but decided it I was going to take the time to hand quilt, I would get credit for it, even if it did look sloppy and show my uneven and crooked quilting stitches. In fact, with my modern quilting style, I am not even fretting about uneven or crooked stitches. It's liberated if I do it on purpose, not mistakes. Can you be liberated and sophisticated at the same time?

I did the top center and two of the little free form hearts on Monday.
Tuesday, I did the left side and the other free form heart.
On Wednesday, as I was quilting, my mother called and reminded me about the family pack of chicken in my refrigerator. She said she had come over earlier in the day when I wasn't home and saw it there. She would have cooked it for me, but she didn't know what I wanted. Oops, I had left it there to defrost and I was supposed to cook it on Tuesday. When I got home from work, I was too hungry to cook, so I ate something quick from the freezer, planning to cook it later. But I would forget, because I wasn't hungry. So, I quickly set the hand quilting aside for my cooking emergency.
When it was time to quilt on Thursday, I could not find my needle. The thread from my unfinished motif had broken in two and the needle was missing. The quilt was on the couch, but I didn't remember it being in that location. Apparently in my cooking emergency, I hadn't properly put away the quilt. The dog was frantic because of the thunderstorm. I was worried that he might have had a fight with the quilt, and I was hoping that the needle didn't win. It wasn't until it was time for bed that I found the needle in the fold of the couch. On Friday, I finished the top half and started on the bottom half, which I completed on the weekend.
There is a little bit of extra space on the sides I want to quilt and I will be finished. 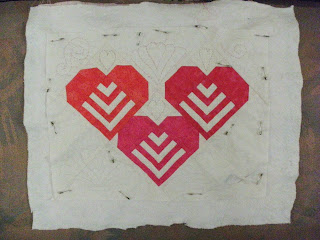 Posted by Shasta Matova at 9:16 AM