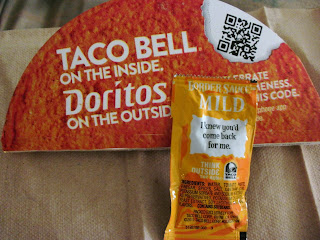 My daughter is back home, after spending a year out of the country going to school in England.  Picking her up was incredibly easy - we found a convenient parking spot right by the door, and there was a very short wait time before we saw her arrive.  The luggage came right away, and we were on our way home in practically no time.

On our way home, my daughter announced that she would like to make a stop at Taco Bell to pick up the new Doritos tacos.  It was hilarious, and we thought it would make a grand commercial, so my sister tried to record the conversation.  Since we missed the initial announcement, we made it an interview format and everyone thought of questions to ask her:

How long have you away? a year
Where were you? England
How long ago did the plane land? about 20 minutes
Where do you want to go?  Taco Bell
Are there any Taco Bells where you were in England? no
Don't you like soft tacos better than hard tacos? Yes, but these are made from Doritos
Um, aren't you a vegan? [laughing]

Unfortunately, we missed the whole interview because someone was recording without actually pressing the record button.

What made this even more striking, though, was when she picked up the first sauce packet. 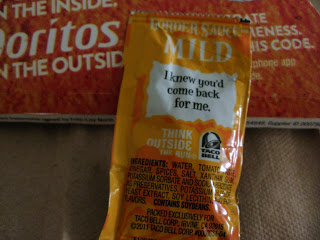 Oh girl that is hysterical - you need to send that to Taco Bell! Glad your dd arrived safe and sound!

I can get that way about missing American food too. I often make a trip to Taco Bell when I am home. Haven't tried the Doritos Tacos yet...