The geese are migrating in all four directions for my Lansing Leaves quilt, and they are racing to the finish to see which group will get there first.  There is no method to my madness.  I started with one row to see how it would work, and started another so that I could chain piece them. Eventually I decided that I should press with an iron instead of finger pressing, and it seemed more efficient to start another row.  The last row took a while to start because I was trying to decide which fabric should be able to go first - should it be my favorite or my least favorite that needs to be "unsewn". Do I even like one fabric better than another.   Finally, I decided to pick a random one and the race began for all four rows. You only see three rows in the photo, because the longest one is in the sewing machine.

I also don't know how many geese I will need, so I am going backward and doing the first step of sewing and cutting the individual geese from time to time.

This border scares me a bit.  This quilt has the least contrast between the fabrics (dark vs. light) than any other quilts I have made.  I tend to make sure there is strong contrast so you can see all my hard work.  The borders have even less contrast than the blocks.  I keep telling myself that it will be fine - after all, that's what happens in the fall, all the colors jumble together into one glorious pile, and you can't tell one leaf from the next until you look closely.

I've been thinking about a blogger/designer who talked about a photo story.  Instead of having a simple picture, add other pictures around it to make it a theme and create a mood.  I looked up online collage makers to try this, and found picmonkey.  I remember that site - I might even have used it before.  I added some random photos of Lansing Leaves. I know it isn't very creative - all of the photos are of the quilt - but it does tell a story behind the scenes of the hotel room where it started and the yard sale table that serves as the design wall. This table was also used to stage the house I was selling, and I remember sitting in the breezeway reading a book as I was waiting for a contractor to finish.  The collage also reminds you of the curved piecing aspect of the quilt. It shows the improvement of my sewing skills over time, as I found curved piecing to be rather easy.  The hint of the improv quilt on the wall tells its chronology in line of the quilts I made, and that part tells the story of secrets yet to be revealed. 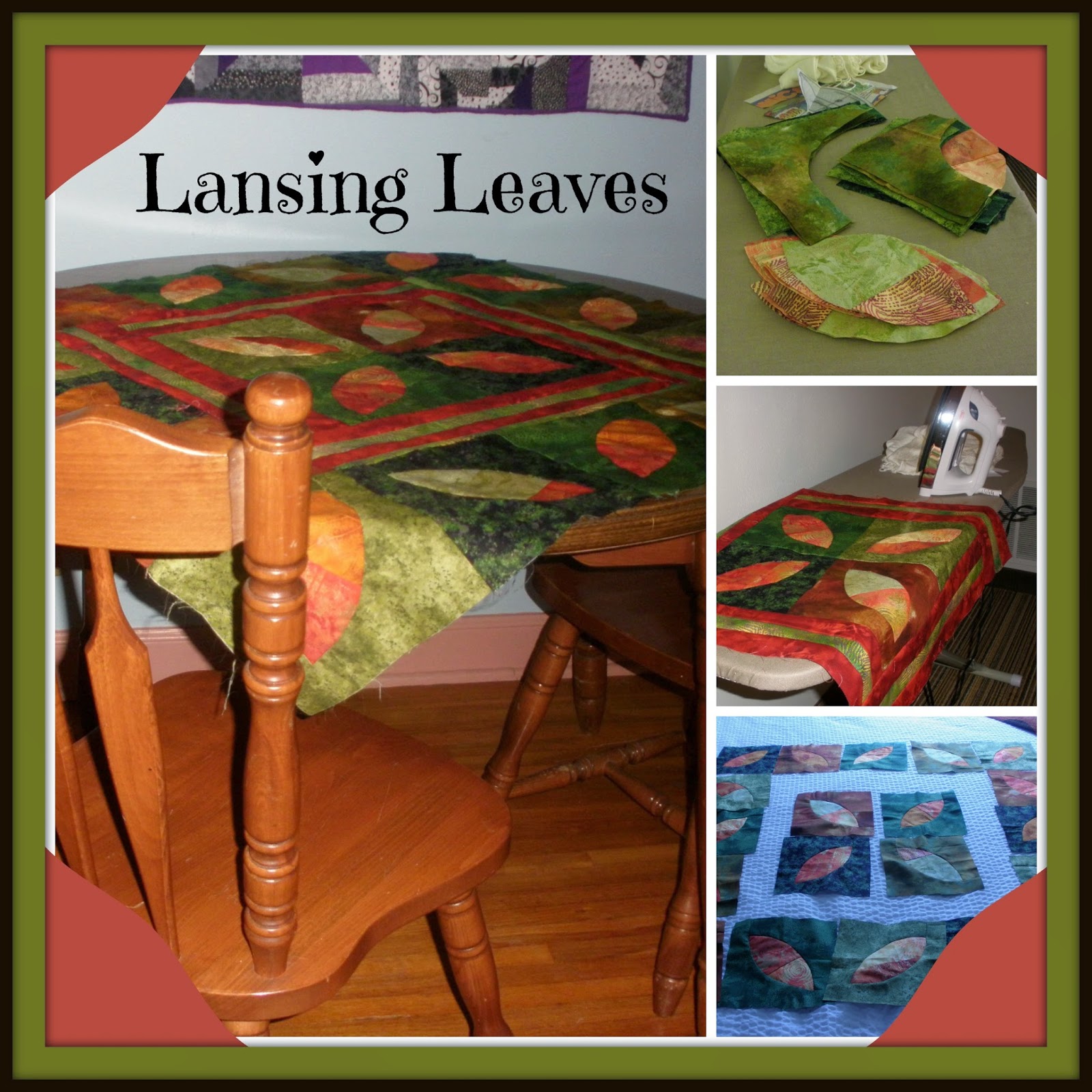 Posted by Shasta Matova at 5:00 PM

I am loving the progression of this quilt! It's really going to be stunning.

Pretty, pretty! I would love to try the Migrating Geese pattern some day. I can see how the flock might just keep on growing! Your colors are just right.