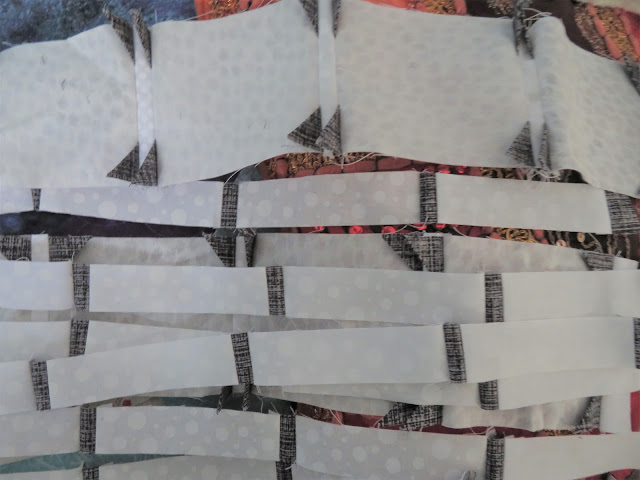 You probably didn't hear the Blockmaker say "next" because she mumbled it under her breath, but all those quilts waiting in the disorderly line noticed a sudden shift in their position.  The blocks for Fourth Rail are finished, and you can see the bottom of the shoe box!  I would show you the empty box, but it is a visual that only the Blockmaker would love. Since "make blocks" is a column in the progress chart, and I am able to check it off, the progress rate has moved up. The Fourth Rail blocks now move to the next station, where the Block Put-together-er is going to arrange and rearrange them to decide on a layout.

In the meantime, the next quilt scurried up to the Blockmaker's counter before anyone else noticed. This quilt happened to be ATC Holder, which is a horrible name for the quilt, but it is its name, so what can we do?  There was a spool of whitish thread in the box, and more blocks are now being made. This is a very calm, sedate block compared to the wild and scrappy Fourth Rail. This one requires precise piecing (those black cornerstones finish at half an inch) and only use three fabrics. This is a scary prospect that requires the right amount of fabric to finish the whole quilt. It looks pretty boring, but I hope to make it up in volume!

Linked with:
Put Your Foot Down
Posted by Shasta Matova at 2:02 PM

Sounds like you're making good progress. That always feels great.

seeing the bottom of the box is definitely a blockmakers special moment.... looks like careful piecing needed there...
Hugz

I always have quilts jockeying for a new position too.

Congrats to the the Blockmaker, and I know you can do it to the Block Put-together-er (did that pass spellcheck? hehe).

Good luck; you're making progress. I like quilts (and piecemaking) with lots of different fabrics, I understand what you mean when you say "only" three fabrics, it does get a bit boring with little variety.

Congrats on all the progress. Sometimes it's nice to go from the wild and colorful to the sedate. Hopefully the fussiness doesn't stall your progress. Good luck!