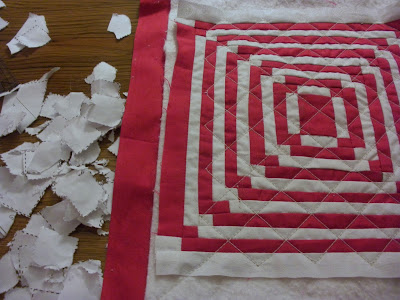 The Liberated Quilters yahoogroup were having an at-home quilting retreat this weekend. It was nice to think about other people quilting along with me while I continued to work on my Infinity red and white reproduction quilt.

On Sunday, I added a few more rows. I will spare you the photos as I added each row.  I continued to sew until I ran out of the red fabric I had cut. I could have cut more if I wanted it to be bigger, but it was also the same time that the small ruler I was using wouldn't have worked.  I didn't have a plan for how big the quilt would be, and wasn't thinking of limiting it to the size of the ruler, but it seemed like as good a stopping point as any.

I then had to make the decision of whether to add white after the red. In the original quilt, the round is not finished.  I really liked the liberated aspect of it, but I also like the symmetry of completing the round. Since I was joining the Liberated Quilters retreat, I had to try to figure out whether it would be more liberated to copy the liberated aspect of the quilt or to liberate myself from the pattern to make a more conventional courthouse square.  At the end, I decided I wanted to make the quilt more rectangular, so I added the white at the top and the bottom. 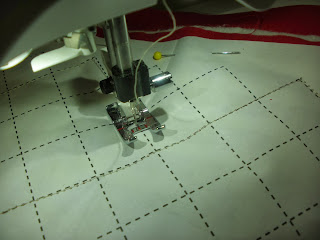 I wanted to make sure that I kept the quilting simple on this quilt.  I got out a book of quilting patterns, Helen's Copy and Use Quilting Patterns (Dear Helen, Book 6)

and found a simple grid.  I think curves may have worked better on this quilt, but I didn't want to distract from the pattern.  I simply made a copy of the grid (it was just the right size) and pinned it to the quilt sandwich.  (I used a fusible spray).  It was a simple continuous line so it was very easy to quilt.  I tore off the paper and trimmed the quilt. I'm not sure I chose the best quilting pattern - since the grid is square and the block is rectangular. It is just slightly off center, but because of the small size, it looks more off center than it is. But I am liberated, and it is staying the way it is. 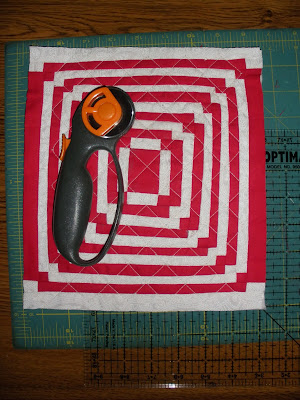 All that is left is the binding, the hanging sleeve and the label.
Posted by Shasta Matova at 1:03 PM

I just love it. All aspects of it! To me any wonk of any kind is such an amazing act of setting one self free. And this red and white quilt is that and more. You have such a good eye for design!

I just love it. All aspects of it! To me any wonk of any kind is such an amazing act of setting one self free. And this red and white quilt is that and more. You have such a good eye for design!

I have no idea why my one click created two comments, so I'm going for 3 and see if we get four ;-)