In my last post, I told you about my plans to make masks.

My original plan was to try each of these, but since I don't need that many and want to quickly give my cousin the masks she needs. I decided to guess how I would like the other masks based on looking at it instead of actually trying it on.

Since I made the plans, I took a couple additional walks. Only for you to test out the mask. I used the same batik mask I tried earlier.  I guess it is mine now. In the morning walk, I must not have tied the mask properly over my pony tail and it slipped down.  I thought maybe for people who don't wear a pony tail, tying on top of the head might work. When I tied it up higher to fix it, I must have tied it up too high, and the mask touched my eye.  In the evening walk, I tried it without a pony tail, and it was very difficult to keep it on straight. I am going to say it is because my hair is so silky smooth.  Also I have not been turning the edges of the straps under. I just tied them to keep them from unraveling, but this particular braid does a lot of unraveling, particularly when washed.


Today, I want to show you a couple more mask designs I tried. 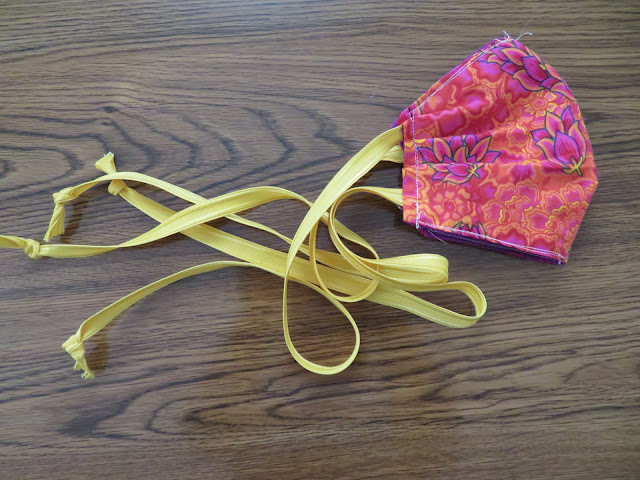 This one is called A.B. Mask - for a Nurse by a Nurse. It is easy to sew and is similar to the other patterns I made, except that instead of cutting rectangles, you cut the top and bottom at an angle. The original pattern uses single fold binding, and I adapted it to continue using the braid.  I thought this pattern would make the mask angle down away from the eyes. Since I am looking for a mask to fog up my glasses, it doesn't look like it will solve that problem. I have read that if you clean your glasses with shaving cream or alcohol, you can avoid the fog. I haven't tried that so I don't know if that works. 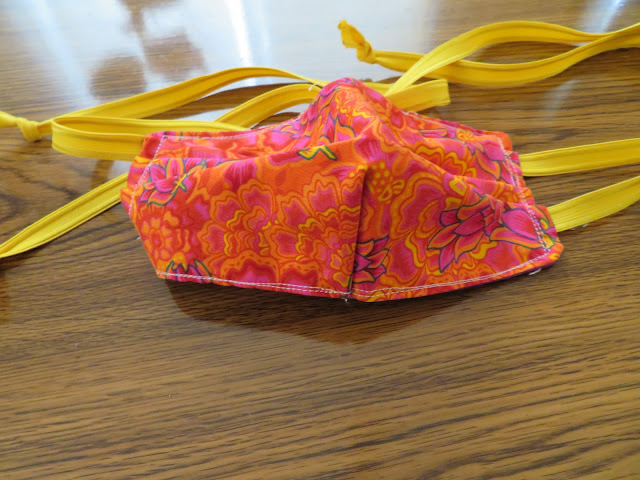 Same mask, different angle. One thing I really like about this mask, besides its relative ease of cutting and sewing, is that it forms a slight duck bill, as described in the video in the last post. I think this would make it easier for people who have to do a lot of talking and maybe people who feel claustrophobic wearing the mask. I didn't have any trouble talking with my trial mask, but I don't have long conversations with Zeus while walking. 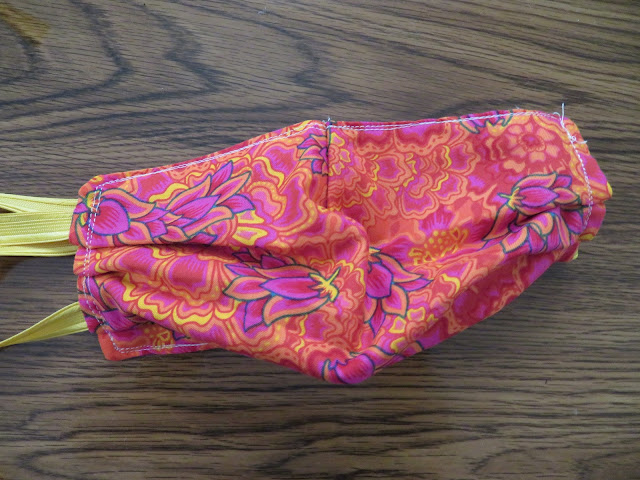 As you can see in this photo, the dart makes the mask form a straight line across the nose. This is strange because my batik mask doesn't seem to angle up even though it has darts. I am not sure how well it would work to avoid fog on the glasses. 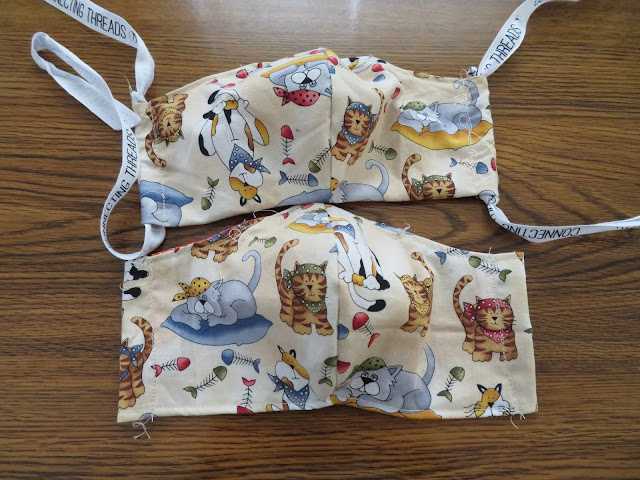 This mask doesn't use pleats so if you don't like making them, this pattern may be for you.  However, this pattern is more complicated to make. I was planning on making one, not two, of these masks, and didn't read the directions to know I was supposed to cut  mirror images.  Of course I had to make it more difficult by using directional fabric. I even managed to find a small wire that I could use to make it more form fitting over the nose.You have to cut and sew curves, insert a wire, secure the wire inside, preferably without breaking a needle, and string the strap through the opening.  The curves are not like a drunkard's path, where you are trying to fit two different shapes together, so they are fairly easy to sew.  Both of the curves are exactly the same and you are just sewing them to each other.  Pressing the 3-D shapes is probably the most complicated, but I wouldn't know, since I skipped that step!

I like it because it curves down over the cheeks so there is less likely to be air leakage into the glasses. It is also attractive. I also like that the straps can be removed. This way the recipient can choose a tying method she prefers. My straps are slightly too small to feel secure, and I will have add some length to them or replace them.
Posted by Shasta Matova at 3:32 PM

I haven't tried the shaped masks yet. I think I will give one a try. I finally wore one of the easy ones yesterday, and my glasses definitely fog up with it. :) Happy Easter!

I too have used the for a nurse by a nurse pattern. I have tried a couple others, but liked making this one. I agree that a poly tail would be needed to help keep it on and out of the eyes.

I ended up modifying someone's pattern to produce my last set of face masks, which My Guy much prefers. Hopefully you found one that worked for you. Thanks for sharing your experience with all the different patterns.

I made the one with pleats, which fit well but the pleats were a pain in the ....
Thanks for sharing your mask making adventures.

I am wondering if there are any that work well! At least for some of us. I made one today with the ties...where the tie is folded in half and then the raw edges folding to the center...then it encloses the the top and bottom edge of the mask. Roger is okay with it, but I found it very uncomfortable.

I want to try your "kitty" pattern. I've only been making masks with pleats and I don't really like how they bunch up when I wear them... But I don't like wearing ANY mask! It makes me feel claustrophobic... but if you have to, you have to!