Winding Down the Weeks of 2020

We are almost to the end of the year.  Every day this week, I woke up and said, "today is the day I will baste the quote quilt".  One day, like magic, I will actually get up and baste it.  In the meantime, here are some new additions. 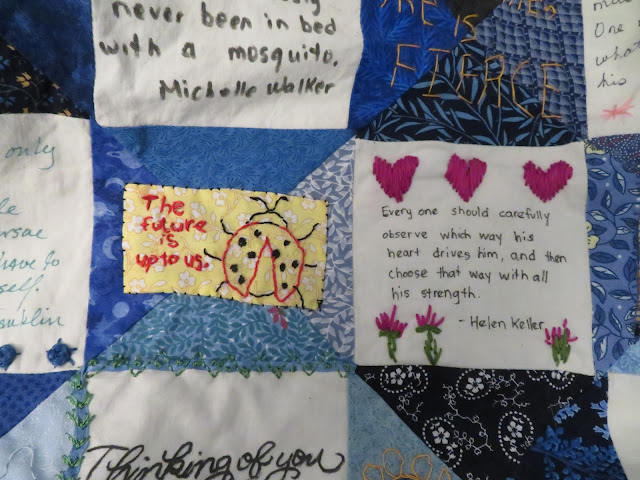 I added this ladybug and quote. It is a fairly new quote, from Enola Holmes, Sherlock's sister. I haven't seen the show, but I liked the quote.  The ladybug makes me think of my friend, the first and only person I taught how to quilt. It is a bittersweet memory, as she passed before she was able to complete her quilt.

In all of the blue blocks, I make sure that whatever I add is small enough that you can see at a least a small bit of all of the blue fabric. I think there is only one place where the blue is hidden, but that fabric is elsewhere in the quilt so it isn't a big loss. 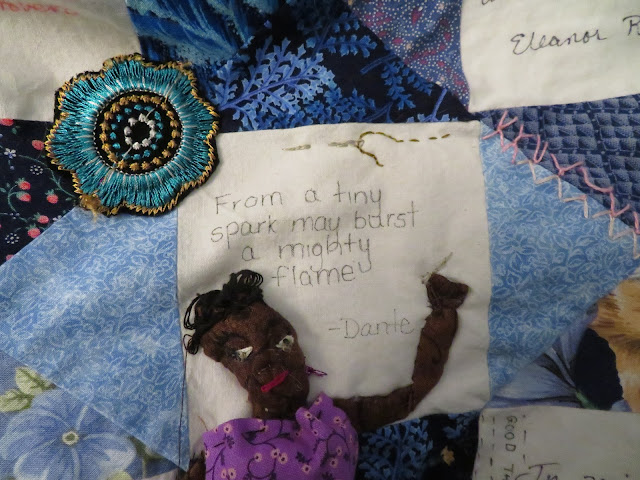 I added the needle on the quilter's block. I like the one at the top but I may have to do the one in her hand over again. It is completely the wrong angle. I chose that angle instead of the other because it looks like she is making a fist. Maybe she will be holding scissors instead.

The great appliance race continues. When I left you last, the washing machine and the dryer were competing to see which one needed replacement.  One of the rods on the toaster oven stopped working.  The computer and the can opener joined the race with their noises.  All of them, like me, were creaky and complaining, but continued to do their best.  Then out of nowhere, the hot water heater joined and won the race.

This week, we have a second runner up.  There are two lightbulbs which went out, but they aren't appliances so they are disqualified. The chopper has been recalled, but it isn't electrical, so after some debate, it too was disqualified.

But the oven stopped working and it won second place. I turned on the oven to preheat it and mixed a batch of chai cookies.  Then I realized I smelled gas and there was no fire. I turned off the oven and opened the window and turned on the fan. Zeus and I spent a few minutes outside as we waited for the air to clear.  Then we had to make a run to my sister's house and asked her to bake my cookies. I was going to share some with her anyway if they turned out any good.
I ordered (and received) the oven ignition switch and am hoping that when I put my head in the oven, I will be able to repair it. The chai cookies, by the way, tasted good, but didn't taste like chai because they don't have any tea in them. They are basically snickerdoodles with ginger and cardamom added to the cinnamon. The recipe turned out crumbly so I had added milk to get it to be the right consistency, so maybe next time adding some strong tea would be the way to go. 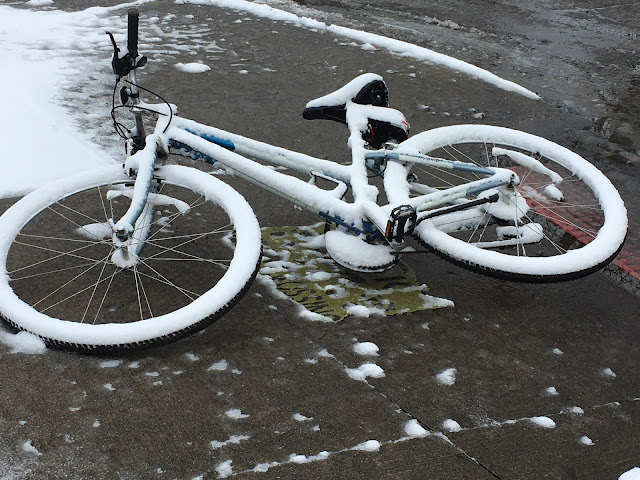 Always makes me wonder when I see sights like this, what the story is behind this situation. What happened here?

My work has finished again, so this week I took another online art class. This time it was about Indian art. The teacher didn't know how to use her technology very well so it took some patience to watch. She said "make shapes just like this, just follow what I am doing on the screen" but you couldn't see her.  The content of the class was really fascinating and I am glad I stuck around because she did work out the kinks.

I have also watched a lot of interesting art videos on YouTube. Mostly it has been flip throughs of art journals, but also videos from teachers like Dina Wakley. I started a bullet journal. I haven't done much to it, and I am not sure I will even continue, but I have a page with a habit tracker.  I just made grids to represent each day of the month and you color in the box where you did that habit. I find it very motivating to actually follow through and do that task you want to become a habit. It makes me more accountable.

I think scissors in her hand would look more natural. A needle is so small.

I like your quilter a lot. You could leave the needle as it is, redo it, or have her holding scissors, or even a tiny quilt block.

Replacing the needle with scissors may be the way to go on the quote quilt. You've added so many fun things. Happy stitching this week. Hopefully you'll have more time to play.

Sorry about all the appliance drama at your house. I really think they conspire together and want to all go out at the same time. I'm glad the gas situation was caught early. The online art class sounds intriguing. I'm going to have to look into it.

Thanks for the news about the craftsy classes. I registered and am looking forward to taking some of their classes!

Oh, those appliances! They really do seem to be conspiring against you!
Maybe it's not time to baste the blue quilt yet because you're not done with it? You seem to keep finding new and wonderful things to add.

Your quilt is going to be one that people can look and look at and still miss something good! I sure would enjoy the opportunity.