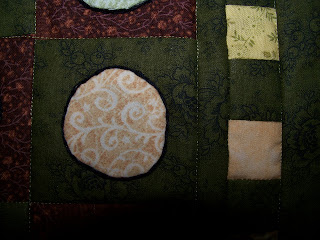 Bear Picnic wanted to see a closeup of the quilt I had on the door. I'm happy to show you. It is no longer on the door, but it is on the wall in the bathroom. One day I am going to make a quilt for the kitchen too. My goal is to have at least one quilt in every room and hallway! The background is pieced in alternating colors. 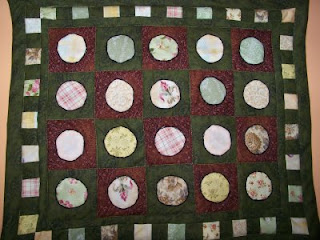 The circles are appliqued on, and I did a chain stitch using crochet thread around each of the circles, thinking I might be able to make the circles look rounder. I wasn't successful in that attempt, and don't think the embellishment actually added anything, but since it didn't take anything away, I'm not taking it out. It has the lovely checkerboard border that I always like. Overall, it isn't my favorite work, but I do like it and it was fun to make. 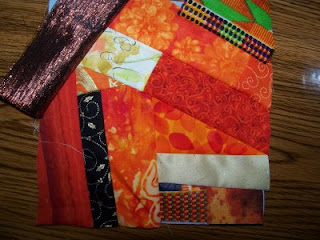 Just to show that I wasn't showing this to get away from showing quilting progress, I made three crazy blocks over the New Year holiday. There were lots of hard decisions to make. I started out with the simple oranges that came as a kit, the same ones I used for the pumpkins - but they looked too similar to me. The inspiration quilt was mostly orange with some yellow highlights. I added other oranges to make it more interesting, which includes fabrics that I am told are African. It's the fabric that has black and green in it. Both of the pieces I used are different parts of the same fabric. The other African fabric is the orange with the shiny gold in it. I used a very small piece in this block so you'll have to look at the closeup if you want to see it. I got some from a quilt show, and have been trying to think of good uses for them. I also added shiny metallic fabric, and a velvety one. The yellow fabric with the flowers is an old dress of my mother's. That dress or fabric was actually purchased in Africa. I also added black as an accent - I hope I don't regret that. Since I wasn't using scraps, I had to decide what size and shape to cut each fabric. I'm having fun with it.
Posted by Shasta Matova at 6:33 PM

The circles are good -- I like that they're not perfect, more folk-art-ish.
Jeanne

love your idea of a quilt for each room and hallway... and then, a move to a larger house? :-) hehe

love the circles, so pretty.
BTW your the winner of the fat quarters on my blog site. email me your address and color you like.
congratulations and great blog site.

Yes, I like the idea of a quilt in every room too.....your orange project there looks fun...you've appliqued circles on your quilt...and I'm hand quilting circles on mine....

Lovely circle quilt! Why don't you try to put some smiley faces on each circle?

Yay! Thank you for the close-up! It's such a wonderful quilt. I love how you outlined the circles with crochet thread, it really adds dimension. Sorry I didn't comment sooner, I've gone back to my Kindergarten class haven't been visiting blogs for a week. I also read about your hectic week and hope things let up!!