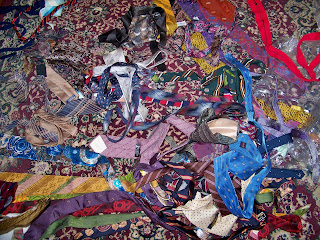 I've been working crazy busy hours still. That project finished yesterday, the new project won't require the crazy hours, so there is a big sigh of relief that I will have time to clean and garden. Remember the freesia I showed you on Mother's Day? I was feeling very guilty that I hadn't found the time to plant those outdoors. What was I doing? Well besides working, I went to the thrift store and bought another couple of bags full of ties. That's a few of them on a very busy carpet 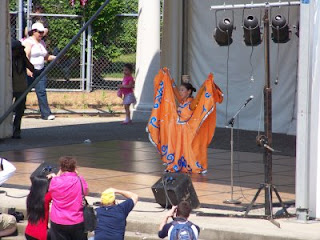 On Memorial Day weekend, we went to the Asian Festival. It was good as usual. I bought a beautiful blouse for a very good price. We do look at the booths for a short time, but most of the time, we like to sit way in the back under the trees and watch and listen to the shows. They have several stages, five I think, all of which have one show after another. I didn't realize until the photos were loaded on the computer that his lady was balancing a basket on her head. 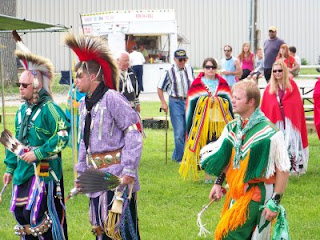 Then the next day we went to an American Indian Pow Wow. It was very casual with just a few booths, but we had never been to one. They had people show how to make moccasins, fringe, etc., and they had dances. We spent a lot of time talking to the people in the booths. I don't do that enough - just talking to people to find out what they know that they can teach me.


Eventually I managed to plant the freesia outside. I have a barrel near the sidewalk and thought it would be a great place to plant the fragrant flowers. The next day, I came out to admire my handiwork, and apparently something had pulled them out and chewed out the roots. I guess the delay just gave me a few more days to enjoy the flowers.
Posted by Shasta Matova at 9:06 AM

What exciting thing are you going to be doing with the ties? I remember seeing the book you had borrowed but I don't remember if you had decided on a project yet. Tetsu has a bunch of ties that never get used too! Do I want to cut them up?

Great pictures! I love your pile of ties, too! I was offered an enormous bag of ties a year ago and turned them down!!!!! I was in Alaska, I couldn't afford another $25 baggage fee and didn't think to store them at my parents and bring them home in smaller tucked ins. Someone else claimed she needed them 'now' for her charity projects and I deferred to her. Dang! Me and my thrifty/generosity! So, how much did you have to pay for yours? Our thrift shops sell them individually and often for more than a cheap tie costs..which is ridiculous and unfair to those truly needing a tie AND a bargain!

Your ties look like fun!
I went to the Asian festival too! Too bad we couldn't have met up!