Did You Miss It?


It was Pi Day, then it was Saint Patrick's Day, then it was National Quilting Day, then it was Super Moon night. I mostly missed them all - remembering at the end of the day, and too lazy to do anything about any of them. But today is the first day of spring, and that certainly calls for a celebration, particularly since I noticed it in the morning.

I finally finished this block from the Jane Stickle quilt. It took me several days, since I did not work on it continuously. I used the leftover fabric from my Block of the Month. The center cross seemed like it would be easy, and it is, except the part about lining up the two triangles so that it actually forms a cross. This is after three tries, and I decided it was close enough. And the part about what color goes where. I made the center with a dark background accidentally. Even though it would be fine as an alternate design choice, I really liked the look of the light background better. So I started over and made another center with a light background.

I am pretty proud of the middle area. Instead of cutting those weird pencil shapes, I sewed rectangles, and trimmed them to size. That turned out to be much easier than I expected.

Unfortunately, since I was using leftover pieces, I did not have enough dark fabric to finish the border of the block. I decided an alternate design choice would be to reverse the colors - the dark was supposed to be the bigger part. Wow, I was afraid I wasn't going to be able to finish it with cornerstones because I was a quarter of an inch short of the dark fabric. See those little pieces do count, even to fractions of inches. Luckily, I found another scrap and was able to complete the block. In fact I have an extra inch of fabric for another cornerstone! 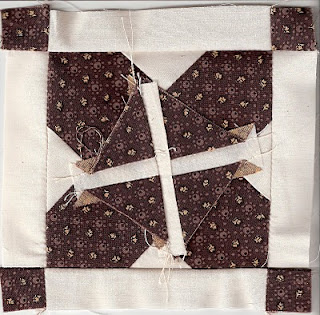 With the lighter border, I think the dark background center would have looked pretty good too. With each of the blocks in this quilt, there are so many beautiful variations of the same block.

Oh my gosh this looks so fiddly - it's a lovely block but I'm glad I didn't have to make it! I can't get things to line up no matter how hard I try.

I missed Pi Day and NQD, but did manage to remember the others. We even went outside to take pics of the moon, but none came out. It didn't look that much bigger to me. But we didn't see it until it came over the treetops, too many houses in the way, and I did hear that when it was closest to the horizon is when it appeared the largest. We can't see the horizon.