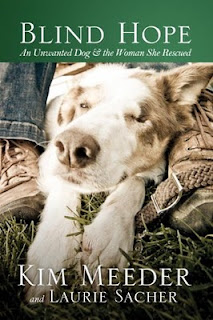 Blind Hope: An Unwanted Dog and the Woman She Rescued

by Kim Meeder and Laurie Sacher is about a worker at the Crystal Peaks Youth Ranch in Oregon who adopeds a dog from a shelter who winds up having more problems than originally imagined.  The dog was blind.  The veterinarian recommended and Laurie decided to keep the dog.  This story is about their relationship, and the Christian lessons Laurie (and presumably Kim) learned from it.

I personally had a hard time reading this short book.  There is a forward by Kim Meeder, and her style of writing is completely different from the writing in the main part of the book, even though the story is told from her viewpoint.  I imagine that Laurie is the one who did a lot of the editing. It just felt awkward reading someone describing themselves in the third person. Also I imagine that Laurie took writing classes, and did thorough editing to make sure the book followed all the rules that teachers tell you to do - choosing vivid words, showing detail, etc.   I think the writing classes were taken overboard and I found the writing awkward to read. Here's a random excerpt:


From atop my trusted horse, Ele, I looked over at Laurie, mounted on Lightfoot, a gray Arabian gelding. Lightfoot is the most balanced combination of what I like to call "gentle fire" - he'd become one of our most beloved horses on the ranch. The ease with which Laurie sat on him divulged that they were dear friends. Laurie's dark blue helmet drew out and deepened the color of her eyes, already framed by her sweeping eyelashes. The combination was simply lovely.

I got this book for free from Multnomah Books in exchange of this review.

Posted by Shasta Matova at 7:00 PM

I don't think I could read this one - I have such a hard time reading books about animals.

I'm with Allie. I absolutely cannot read animal stories or see movies with animals in them. I know there are a lot of happy endings but the in between heartbreak just about kills me!