It happens every January, and this year is no exception. I feel quilt guilt as I try to work on quilting.  Somehow over the holidays the momentum has been lost, and the new year means I must decide what to pick up next.

I pick up the Daisy quilt, for which I have sewn down the binding. I still need to sew down the label and the hanging sleeve.  But then something else calls me - I should work on cleaning and organizing the sewing room.  I pick up a few things, but then those blocks of the month pop up on my Bloglovin' feed, and I feel like I need to work on them. I started so many projects in 2016 that I feel I must make myself finish them in 2017. But of course, there are new projects coming into the feed too. But then there are two quilts I promised other family members.

Phew!  I was able to quilt without guilt in 2016 (probably not in January though), so I am hoping that I only have a couple more days of this before I can establish a more forgiving routine and enjoy the joy of quilting again. 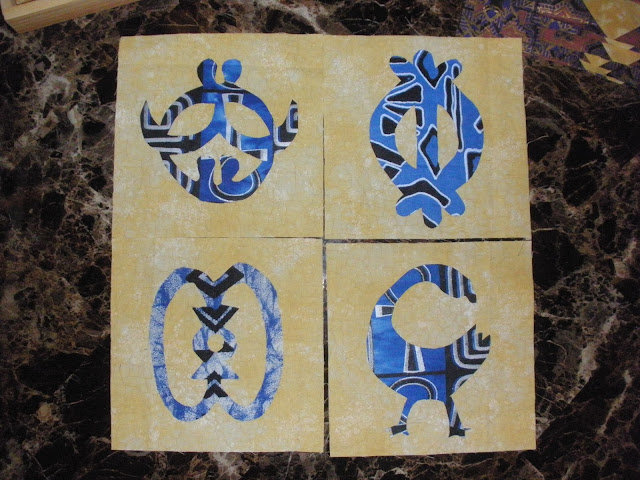 To that end, I have prepped the final three blocks of the Adinkra quilt and will be stitching all four of them down shortly. As it turns out, I have been spelling this wrong. I think in 2016 I spelled it Adrinka- I thought I even checked it several times, but now I think it is supposed to be Adinkra.

The fun begins soon!  February and March are generally more productive for me, sewing-wise, and I am looking forward to that time this year.
Posted by Shasta Matova at 3:41 PM

Quilt-guilt - that's a new one on me, although I think I'm very familiar with the feeling!!! LOVE your blocks, no matter what they're called. I hope your guilt subsides soon, and you can just concentrate on enjoying what you create!

I love your Adinkra quilt blocks. Before I googled Adinkra, I thought how interesting your shapes were and how they evoked a sort of primitive symbolism. Sort of a primitive art feel not to say that primitive or native art is simple or "primitive".