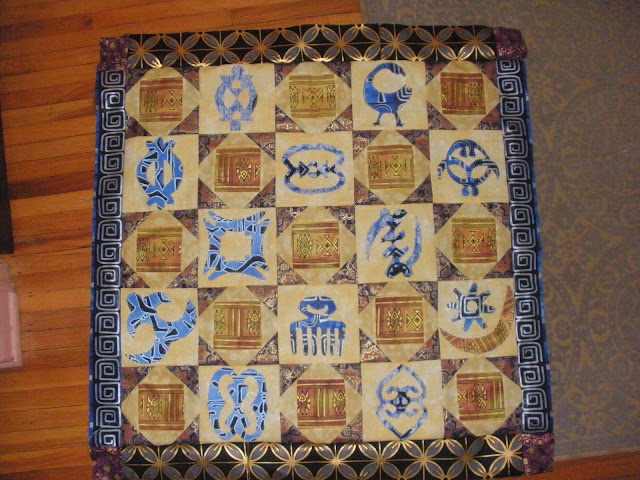 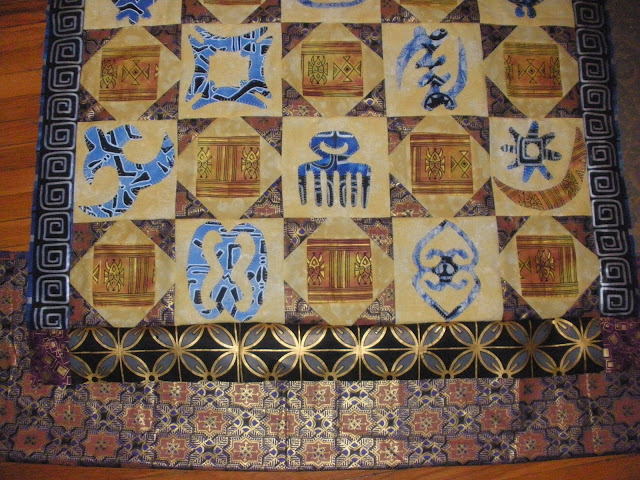 The original plan was to add an outer border using the fabric left from the economy blocks.  What do you think? Does the quilt need outer borders? If so, how wide should they be? What should I use for a binding?
Posted by Shasta Matova at 3:01 PM

It looks finished to me with those borders. I think it would be hard to find another fabric that looks good with both of those fabrics and and that also still let the center blocks that you have put so much work into be the star of the show.

Beautiful! The borders you have added are perfect! If you have enough fabric for the outer border it does look nice in that width. I wonder what it would look like if you used that fabric for the binding and fooled around with the width of the binding?

Really pretty! I think it would like fine like this or with an added border - I like the fabric you used for the cornerstones. If you don't find a fabric you like for the binding, you could always do a no-binding binding - where it doesn't show on the front.

When I saw the first photo I thought it was a finished quilt, though I like the border fabric too, so I guess it might depend on whether you have a particular idea about size. If it were me I might just use the fabric left from the economy blocks as my binding.

Your quilt is lovely. May i suggest a dark solid or mottled outer border. Same width as the blocks. And bound with the same fabric as the outer border. This will frame your beautiful blocks as Wanda suggested and make them the "star of the show." Happy Quilting!

Yes, I think the last border holds everything together. And the width you have there looks about right too.