The Mystery is Revealed

I had a great time following the seven day mystery from Threadbare Creations!

On day one, we got barely a morsel of a clue. Four patches. And I showed them to you with even less detail, to keep the mystery for those who wanted to follow along. I didn't do any of the homework assignments. It isn't safe for me to have cut pieces around and expect me to be able to find them later. 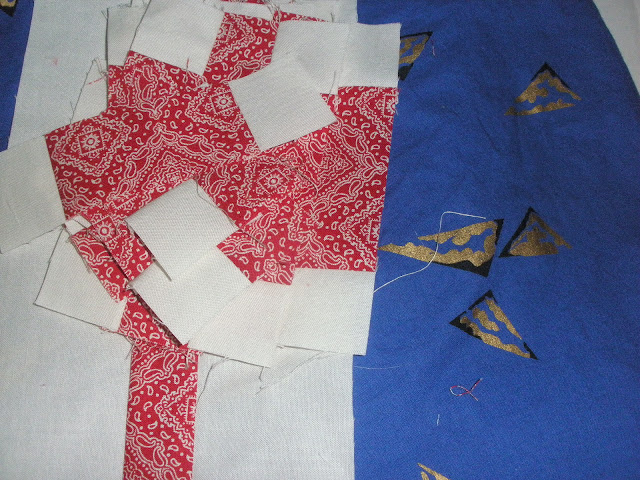 On day two, we made four of these cute little blocks, and I decided that I had chosen well in following along with this mystery: 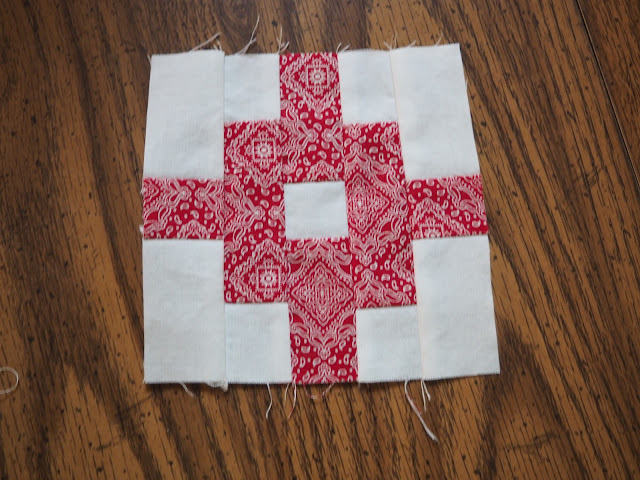 I wondered if the quilt would be put on point. On day three, we made four of these blocks, and even though it made me think we might not, I still thought it might be put on point. I liked that there would be directional movement in the quilt. Hmm, four of each. Seems like there might be a block missing. Maybe the center block. 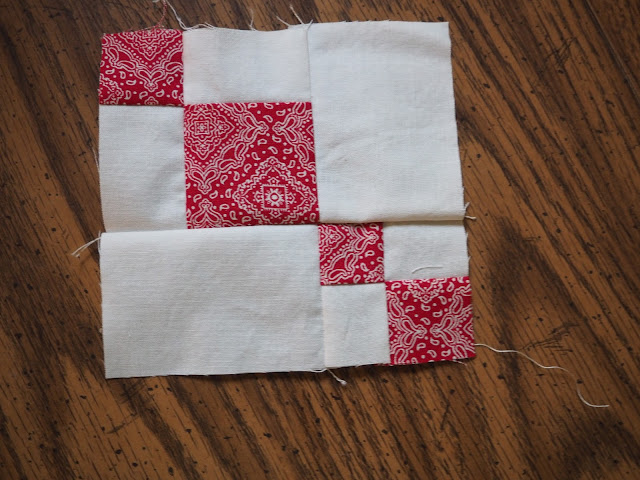 On day four, we made four of these blocks. How adorable are these?!  They definitely will serve well as corner pieces. 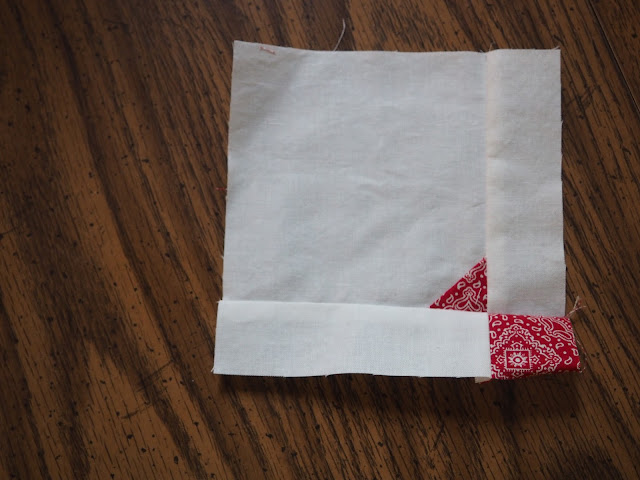 On day 5, we made four of these blocks.  This isn't completely sewn, but it looks like a great cross so I wanted to show you. 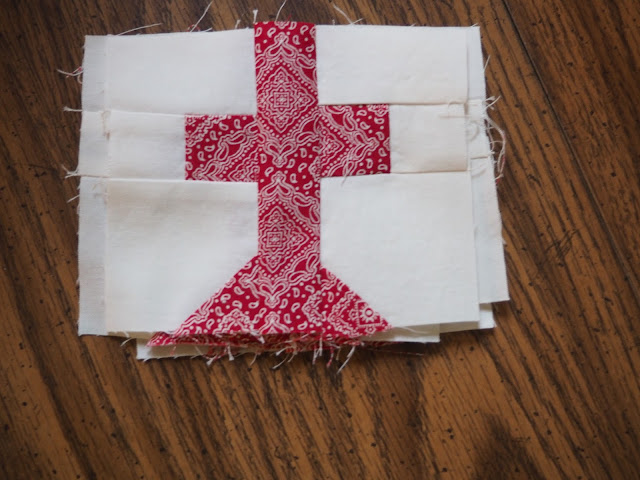 One day six, we made the center block.  I also tried out some layouts. 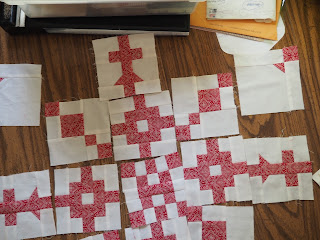 In this layout, I put the day two pieces on the inside. Note that the airplane / sword looking pieces are facing out.

The corner pieces are also facing out. 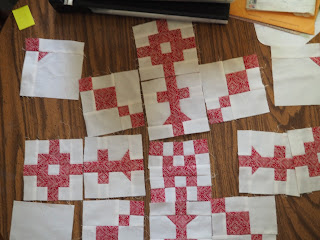 In this layout, I alternated the day two link blocks with the sword. Day six is also the day I forgot how to follow the directions.  It made sense to have the red pieces in the corner to follow the diagonal. That center block isn't supposed to look like an H.  I decided to wait until the reveal to decide whether it was a design choice or a mistake.


On day seven, I decided I liked the plus better than the H, so I made some alterations, one side at a time. When I fixed one side, it looked like a Y.  An H and a Y for Happy! 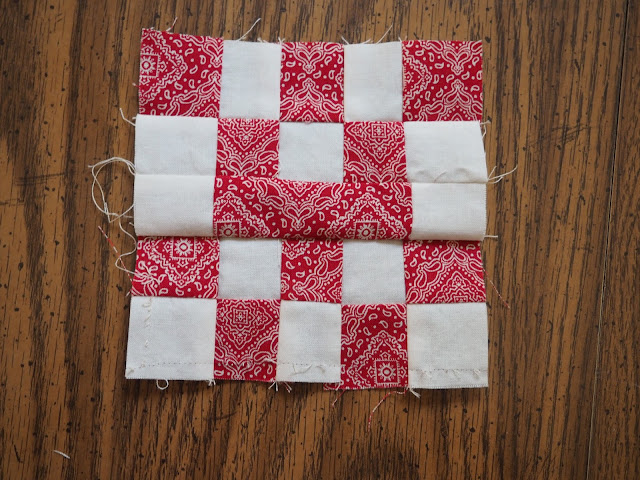 It looks like a nice plus sign with the second alteration and the whole quilt can be pieced. Those triangle pieces all face inward, not outward. How interesting! 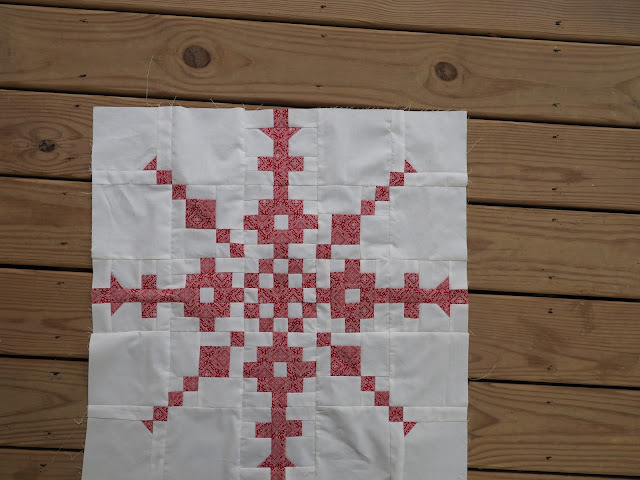 It looks like there are four keys leading to the center.  And four kites or four roads leading to home. Yes, I see that one of my roads is different from the others. But that is perfectly all right, because all snowflakes are different from each other.

It is a snowflake. A red snowflake!  The fabric looks great as a snowflake, because it adds a lacy effect.   I'm not sure it still looks like a snowflake in red, but I really like the design and am really happy with it.

I really liked that Rose had us strip piece so much, and we were preparing for blocks that were coming up. It is irritating when we are made to do things the hard way. When I strip piece, I usually only do one block at a time, and maybe I can think farther ahead in the future. I'm glad I did this mystery because not only did I get a beautiful quilt, I also learned something.

Thank you Rose, for a fun mystery. I will get it sandwiched and quilted before sending a quilt reveal picture.

Linked to:
Moving it Forward
Let's Bee Social
Posted by Shasta Matova at 11:25 AM

Really clever thinking on your part. Enjoyed trying to follow your mind. Red snowflake? Well, they're not really blue either so I'm thinking it's a snowflake as seen in the midnight sun with an aurora borealis casting its reflective colors through the atmosphere! Very, very pretty and you can use it for lovely holiday decorating if not on a special spot on a wall or even a pillow..hmmm..did you say hiw big it was. Too big and Zeus will think its his! Do you still have that sweet boy?

Your version looks wonderful! love the lacy effect of the pattern in the red. I'm calling mine "red snow" after an old TV show from the 1980s :-)

What a great design! I think it is perfect in red and white, very Nordic!

I like the red - it's more Christmassy than a blue one would have been and, as SarahZ says has a nice Nordic feel too. What fun you had with this!

The print and the colour worked really well with the design! Love it!

That really was a fun mystery quilt. I was trying to figure out what the pattern was going to be as you showed your pictures. It might be fun to have a bunch of people make the same blocks and see what other arrangements might be made.