I made a terrible mistake the last time I presented my Project Quilting quilt. I wrote, out loud, that I had to go with the first idea that I came up with because I didn't have time for indecision. This was meant to be a guideline, not a rule. But it seems like my Idea Bank thought it was a free-for-all, and kept insisting on lots of unrealistic things for this week's challenge. 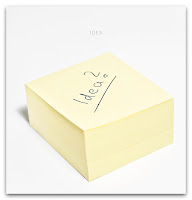 Ideas are like rabbits. You get a couple and learn how to handle them, and pretty soon you have a dozen.

Let's start at the beginning, and let me show you how the ideas had a free-for-all. 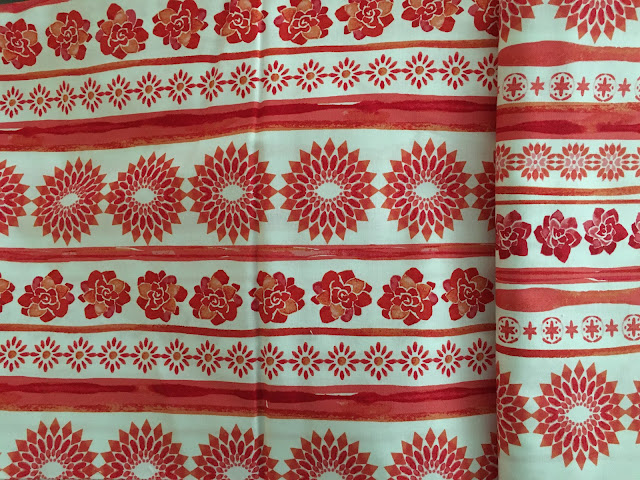 This week's Project Quilting challenge is to use the color pink. The pictures in the challenge post showed melon as a pink too. We already had a pink challenge, and even though this fabric is more orange than pink to me,  I decided this fabric was pink enough. The pictures in my post were taken indoors during winter lighting, so the colors in the photos are inconsistent. I did take the finished quilt outside for the reveal shot which will see later.

I found this border fabric that I wanted to play with. I had just watched a video about a type of stack and whack quilt. If you layer the fabric on top of each other so that each cut is the exact duplicate, it forms really nice designs when you sew them together. 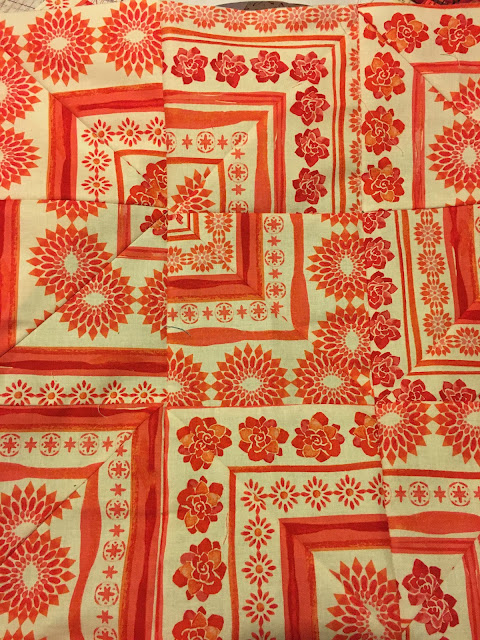 I matched the design on one grain, but I did not match it on the other grain. I knew that precise matching of fabric would also mean precise sewing, and an improv quilt would be more forgiving to finish by the deadline. The quilt had to be finished in one week - by Sunday. Yes, I plan for failure. This meant I wouldn't have an exact kaleidoscope effect, but those lines did form  nice corners. I sewed the half square triangles together to form nine squares and sewed the squares into rows, and rows into a quilt top. Boom. Almost done. I thought I could birth the quilt so all I had to do was choose the backing fabric and I would be ahead of schedule.. 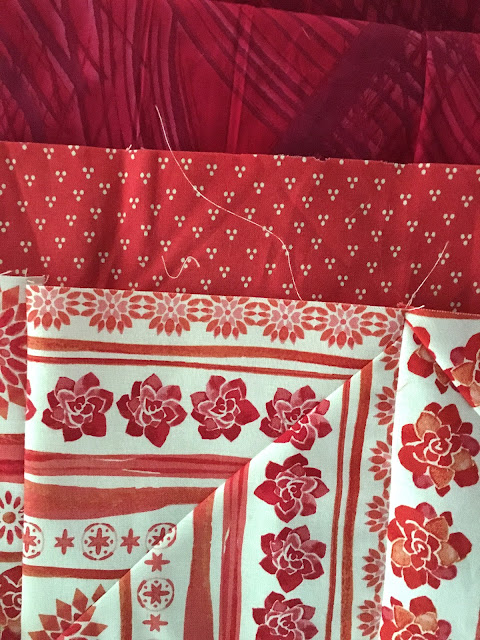 I had two choices I thought would work well. I laid them on the stair ledge and decided to look at them in the morning light to help me make the decision. The dotted orange (which doesn't look orange in this picture) matched nicely in color and the pink would bring out the pink in the fabric of the quilt top.

Then it happened. As I was on the exercise bike, I thought maybe I could use them both. Of course my idea wouldn't be a simple one to have an inner and an outer border. It wanted a scalloped inner border in fact. I asked my idea if it was aware of my deadline. I had to make this quilt in a week. But my ideas don't focus on implementation and deadlines. It was a good idea and Monday was a holiday.

On Monday, I saw that I did not need an even number of blocks since I had a staggered layout, and I could make additional blocks to have a 3x4 layout instead of 3x3. But when I trimmed the blocks to square them up, I made them too small so they didn't fit. The 3x3 layout would have to work. It was a good idea; the fault was purely in the implementation. 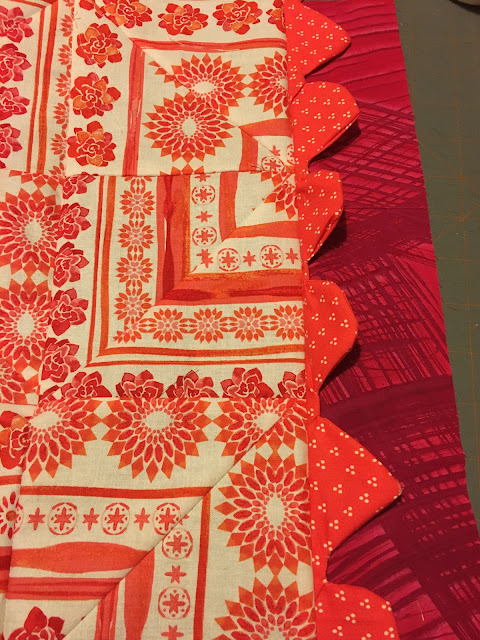 I made the scalloped border,improv style of course, basted the inner border to the outer border first, and attached both borders to the quilt at the same time. I was still on schedule to birth the quilt and call it done.

Then I got another idea. I could add some bling to the scallops to make sure they don't flap out of position. I was going to quilt them down, but I liked their three dimensional quality. Again, I told the idea of my deadline; there are twenty four scallops on this quilt! But I can't resist the  impulse to add bling to the quilt, and I really like working on this quilt and I think it is pretty enough to make the extra effort, even if I can't be finished on time. 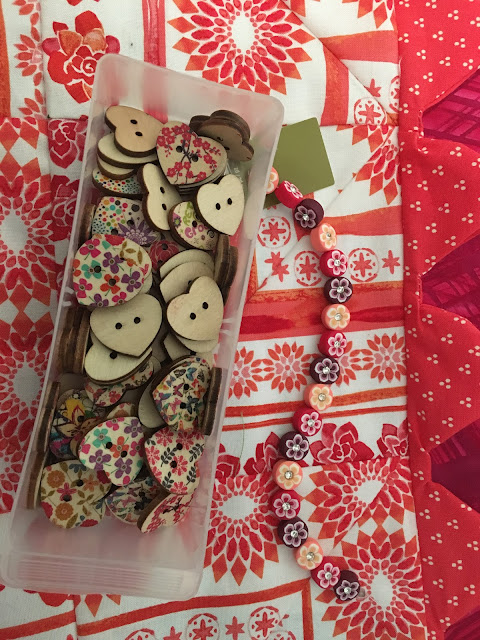 So, I added the bling.  I didn't have enough beads to go all the way around, and only adding them to some scallops would make it look like some were missing, so I found the wooden hearts to add to one side. I liked the beads too much to switch to all buttons.They have pretty colors and a sparkly jewel in the center. 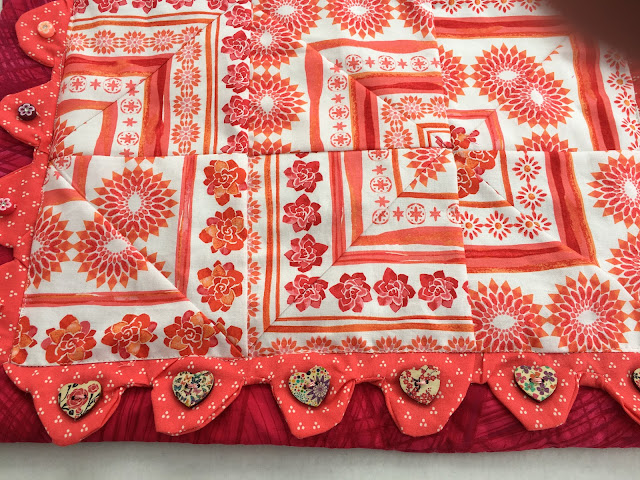 Then I remembered that I would have to piece the batting. Which gave me another idea. I could piece the backing. This would let me use the too-small blocks instead of putting them in the Parts Department. I have been trying to use up scraps, and putting them on the back is a great way to do that. So I pieced the batting and the backing. I made sure to use the top border fabric as a border for the backing too, so there wouldn't be any other color showing if there were any issues with keeping the edges straight. 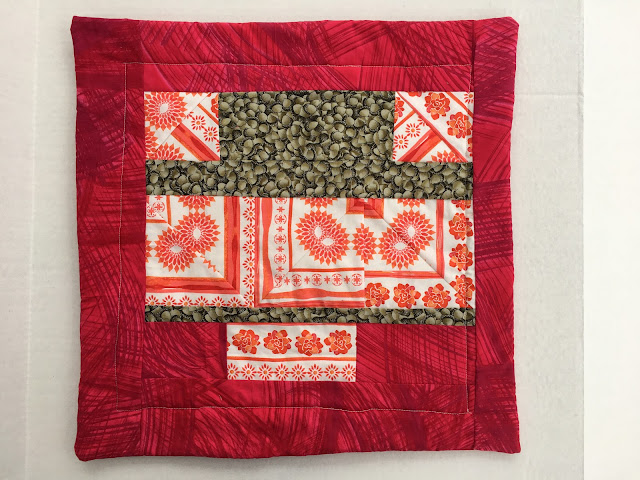 I used the acorn fabric scraps from the One Tree quilt. I did get another idea to add the leftover scallops to the back too, which may have worked, but I thought that might add too much bulk during quilting. As it turned out, I did minimal quilting, only around the edge of the borders. With the wooden beads, it is probably not washable so it didn't seem like a lot of quilting is necessary. 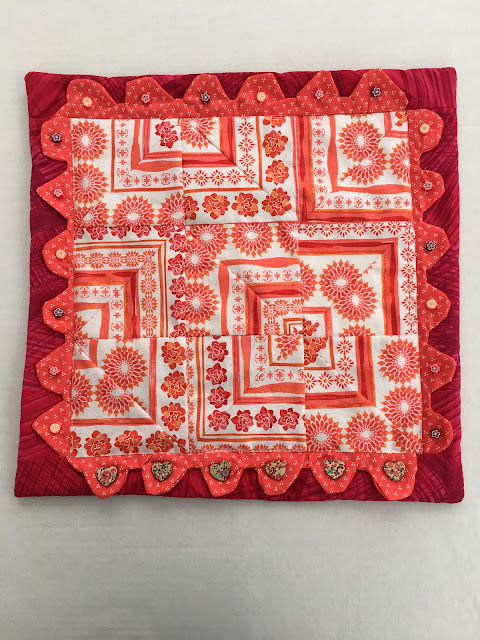 Ta Da! And because I was enjoying myself making this quilt, and enjoying how it was turning out, I was able to get it finished on time! With plenty of time to make this long blog post.

The front and the back of the quilt are so very different from each other, even though they have many things in common. As I was thinking of what to name it, I came across this word.

Sonder: The realization that each random passerby is living a life as vivid and complex as your own -- populated with their own ambitions, friends, routines, worries, and inherited craziness -- that you'll never know existed.

Julie names her quilts after words, and I think Sonder is a good word for this quilt whose front and back are so different from each other. It's got a backstory.

I think it sounds like you had a lot of fun making this challenge quilt. Congrats on getting it all together for the deadline.

I love to know the story of a quilt and Sonder is a great name to fit this quilt!

Love it! Great details with the buttons, scallops, and piecing.

Thank you for telling the story of this quilt. Every step and detail are unique for a fabulous finish.

Given you had so much extra time, I recommend you make your own beads and buttons for the next one ;)

Great post - loved reading about how this piece took on a life of ita own. I like the scallops especially.

What a fun finish! It's so interesting to see how ideas evolve with a project. Congrats on a very pretty mini.

I love it...and love the Sonder, for for a name and for the quote.....I have often looked at people and wonder what they are going through...but never quite as in depth as that. When younger, I used to meet people and think they had had the perfect life as a child or were living the perfect life now, only to find out everyone has their own periods of trouble, some kind of on going problem...

you have made a piece of folklore! Stack and Wack is such a fun technique - the result will always be a surprise.
Queenie

Thanks for shaing your process. Nicely done!