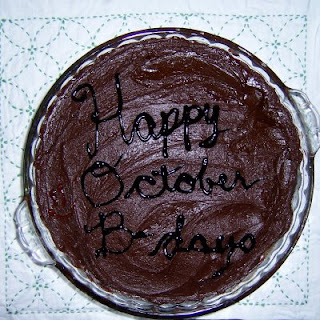 We generally have potlucks at our family gatherings, and I generally get asked to bring a side dish. I'm not good at side dishes, so it is always a search in the recipe books and some last minute concoction that gets to the table. This year I volunteered to make the cake. At first I was really excited. After all, I made all sorts of cakes when we were all living together. Then I got scared. There were things I had learned that I have since forgotten. How I am supposed to double the recipe for the batter, but not for the topping. How I'm supposed to use this batter with that topping. How I need to reduce the butter or the sugar. And besides that, I haven't had the recipe cards since I moved out.

Since any cake I would make would be a research experiment for the family anyway, it was a general search through the internet for the right cake. I decided this time to try to find something vegan to match the needs of one of the birthday people. It has normal ingredients. I made Moosewoods chocolate cake and used coffee instead of water so that it would have a normal flavor. I did well. People even commented that it tasted like normal cake, and they wouldn't have suspected it was vegan if they hadn't been told. There was so much food at the party, you might have suspected that there was a wedding going on, and the people from the other side of the family were going to arrive at any moment.

Oh, and in case you were wondering, the fabric shop experience also went well. They were having a big sale, and I bought four fabrics for backings instead of the two I went for, but because of the sale, I thought it was worth it, and wound up paying about the same money. And now I have extra fabric that will hopefully help another couple of quilts to quicker completion. My mother has decided to make a full sized scrappy sampler quilt, so she bought a lot of fabric, which means she bought a lot more than I did. A lot of the fabric we bought wound up being the end of the bolt. More time at the cutting counter, and sticker shock at the cashier. I think the cutting counter lady and the cashier were probably happy when they got to my order since it was relatively smaller.

Hopefully this means that you will soon (maybe this weekend) have a finished quilt or two to look at.
Posted by Shasta Matova at 7:13 PM

My three kids all love the Moosewood cookbooks and their recipes. And the cake looks great! I think anytime we're asked to bring a dish anywhere, and people compliment it in any way we should be proud of ourselves! So, I say 'hurray!' and 'good on you!' And, your idea of a leaf mosaic on your garage doors...I kind of like it ;) Cute Jack quilt!!!! I'm all set up for trick or treaters in Douglas, Alaska tonight. Ought to be interesting. With my lack of sleep, I don't even have to dress up to look like a witch..LOL