I did some emergency gardening this weekend - I know I am way past the frost free date, but I had to pull out the weeds before the backyard became a real jungle, and needed to plant something to replace the weeds. This put me behind in my quilt making. I am so dedicated to my blog that I took the day off work yesterday just to show you a finished quilt. That and a few other excuses I concocted: construction detour, having to dress up, long drive, rather work extra hours today, etc. 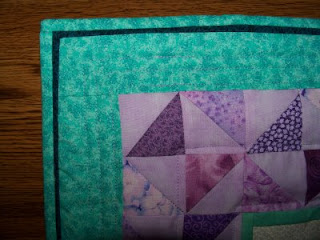 As you recall, the quilt is made up of trash - the center is a pinwheel block that was made with the pinwheels going the wrong way from the still unfinished Lilibeth Garden's quilt. The purple are leftover hsts from the finished Purple Parfait quilt. I didn't even measure them to make sure they were all the same size. I did put back into the bag any that didn't fit well with each other. The bag looks just as full now as it did when I started - I'm telling you, they are multiplying. The other fabrics in the quilt practically jumped on my lap wanting to be used for this quilt. By telling you how easy everything was last time, I think I jinxed the quilt. Adding the border fabric made the backing slightly too small for the quilt. I decided I would rather trim the border to make it fit instead of trying to piece the backing. The batting is a polyester which is slippery and puffy. I had thought about doing some straight line quilting, but thought a free motion design would be hide any nonmatching points. Or at least not call attention to them. But every time I tried the free motion quilting, the machine would not make any stitches! After three times, I decided that straight lines was the way to go. Even though it would make it very obvious that I cannot sew straight lines. 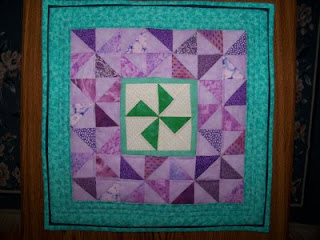 My mother saw the quilt before it was bound and wondered if I was making a pillow case. I told her I was making a wall quilt, like the one on the wall, pointing to the pear one I received from the Four Season swap. She said it needed a dark purple border between the green and the lighter purples, like the one on the wall. I'm not sure she was saying that because she thought it needed something darker or because she thought a wall quilt was supposed to be bigger. I wasn't about to undo my quilting to add the dark, but I thought adding a dark wasn't a bad idea, so I added it to the binding. Just to prove to people that I can't sew straight lines, in case they didn't get it from the quilting. I am happy with it. It isn't too bad for things that were destined to become garbage.
Posted by Shasta Matova at 6:15 AM

I like your quilt is so nice and delicate.
ciao ciao

Very pretty quilt and good use of left over blocks!

Not trashed at all. Fabulous use and re-use of existing materials is what orphan block quilting and Frugal Friday finds is all about ;) I love the added purple...it really does set it off nicely and heck, when you hang it up you will be reminding yourself that as the thriftshop, coupon queen, your frugality is something to be treasured and shown off! It's cute, it's cheerful and makes a great wallhanging!