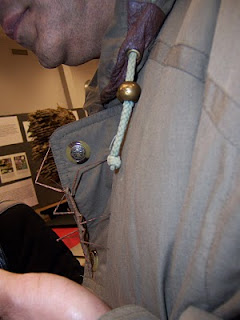 We went to the Biological Diversity Fair that is held at Ohio State University probably twice a year. It was free, and there were a lot of people there. This was the first time I had heard about it, but my sister had gone last year, so she invited the whole family this year. Basically you go from room to room, table to booth, to learn about all sorts of biology - plants, insects, birds, animals, fossils, DNA, etc. It was wonderful - there were students who were manning the table / booth, and they were very open and friendly and told you all sorts of interesting things about what you were looking at. The things to read were interesting.

I've been at another research presentation where the boards were written in small print and very specialized language. You would have to ask questions and pull the information out of the students. Here, they offered the information to you so you wouldn't have to wreck your brain to figure out what questions to ask! And somehow the questions were easier to come up with.

In the picture, you see a walking stick. They had many live insects you could hold, including cockroaches and millipedes. In the background you see a termite's nest.

There were things to touch - dead mice! Ewww. There were a microscope attached to a big screen television that showed you a parasite that lives on your forehead. We didn't have enough time to see everything, although my brother and his children were done early. They did enjoy it though - they just didn't ask questions or talk to the students. 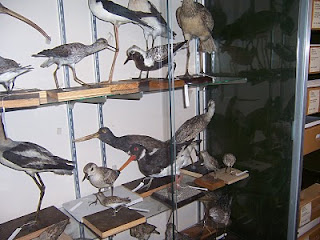 The rooms were huge, and kinda reminded me of the warehouse in the Indiana Jones movie. We weren't allowed to go back there, but in several of the rooms, behind the displays, the whole room was filled with shelves and shelves of stuff - animals that had been stuffed, jars and drawers of specimens, very old books, etc.

Afterwards, we went to nearby Whole Foods and got all sorts of fun foods. Apparently seeing all the animals did not take away my appetite, but everything I got was vegetarian! They had a lot of samples out, and it was nice to try things that I don't usually get.

Definitely go if you get a chance. I wouldn't have thought about going to a fair like this, but it was very interesting and informative.
Posted by Shasta Matova at 11:24 AM

Other than that, it sounds fun!