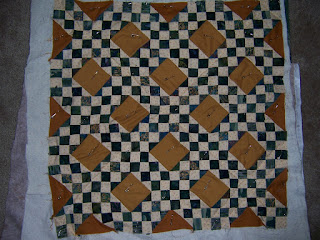 
I also started the competition for the 2010 Quilting Games. I am competing in all of the categories:
Yesterday, I expanded my knowledge by trying to catch up on my blog reading. I have a huge list, and there are so many wonderful ideas out there. I did the short program for the Reach Out and Perform An Act of Quilty Kindness by trying to comment on the blogs I read - have to do more of that to win an medal.

I also participated in the Try a New Technique by trying to hand quilt my Moldy Crackers doll quilt, formerly known as Cheddar Cheese and Crackers. I have done some hand quilting on a muslin square that I made in a class (I made a pillow out of it), but I haven't ever done a real quilt. I kept debating between machine and hand quilting. I didn't do a good job of making it, so machine quilting would make it go away faster. Plus there are lots of seams and batik. But it is an old fashioned design, and I used my cheddar fabric. I finally decided it was something I could do while watching the Olympics. Only it isn't going so well, because my quilt top doesn't lay flat before the quilting, and I'm not sure that I'm going to be able to quilt out the problems. I think the problem is the border, so I am going to take it out, and hopefully will be able to continue the hand quilting.

I've also started cutting out some applique shapes - I'll be using a new technique of sewing down the edges using a straight stitch instead of a zig zag. 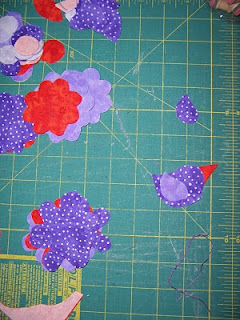 I have started competing in the Winter 2010 GeneaBloggers Games.

I will be competing in all of the competition categories:
Yesterday, I performed Genealogical Acts of Kindness by indexing 100 names in the 1910 Military Census. I think that's enough for a Medal in these games. I practiced a lot for this, as I have more than 3,000 names indexed now. I also expanded my knowledge by doing that, because I didn't even know there was a separate military census. I also watched a couple of history shows on television about African American History and Moroccan cooking. I am going to award myself a Medal for that one as well. I will probably do more of both events, and maybe get a different Medal, but I don't have to if I don't have time.

Both of these Games are great motivation to do something! I also spent a lot of time outside shoveling snow off my steps and driveway. I am giving myself a Gold Medal for that. Whether it is a brand new category or the Organize category in both games, I think I've definitely earned it.

Posted by Shasta Matova at 9:36 AM

Thank you for your nice comment ! Have a happy creating day!

You're a winner in my book! I love your cheddar quilt - I would think you could ease out any problems easier with hand quilting than by machine. I started with hand-quilting and try to still do one per year. But maybe not this year.