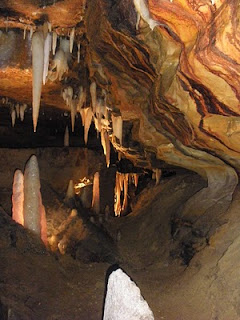 We dropped our host daughter at the airport this morning, ending her three week stay.  She really enjoyed shopping, so we did lots of it.  Many of the students like to scope out the store and make a plan on the first visit, and return for a second visit to actually make their purchases.  It's not a good plan, especially when you are on vacation for a limited time, and especially if you are depending on people who are not aware of this plan. Since we did lots of shopping this time, hopefully she was able to get all the things she wanted.  Next time, hopefully we will remember to tell them up front to buy something if they want it.

The first Saturday, we went shopping, and went to a movie.  On Sunday, we had a family birthday party.  The second weekend, we did more shopping, at different stores, and went to my brother's house to do oil painting.  And the final weekend, we went shopping, of course, bowling, went to the park for a hike, and went to the Ohio Caverns.  We ate out a lot more than we have in the past, which was already a lot more than we do when we don't have a guest.  During the weekdays, she went to school, and they had English classes, as well as field trips to Hocking Hills, Kings Island, Anthony Thomas Chocolate Factory, and Adventure Camp. They also went to karaoke, and we played tennis. 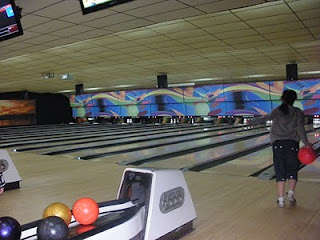 This student was the least shy of the three we have had, and she was more than willing to tell us what she liked and what she wanted to do. I think she understood more English than the other two as well.  There were a couple of times we had to say no to some events, but they just weren't feasible.  I had a really hard time saying no, but we did try to make sure she had something fun to do in its place. She said she especially liked the hiking and the caverns. 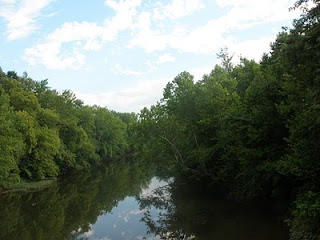 It is a lot of work for me to think of what to make for dinner - I am out of practice, since I haven't had to think about someone else's hunger for a long while.  My daughter is very choosy, and she has been fending for herself for the most part since she was much younger, and when she is in college, I don't have to think of anything for her at all.  I'm used to making a meal on the weekend, and eating it all week.  To think of something different to make everyday was difficult.  Our guest is very easy going and would eat whatever I served her, but I tried not to duplicate any meals, just in case she didn't like something and didn't want to tell me.  Thinking of entertaining things to do is also difficult.  My daughter said no to museums, which took away many of the options.

It is all worth it though, because we get a chance to see familiar things with new eyes, and get a chance to do the things we have been meaning to, but don't get around to.  I told my daughter we can still do things even when we don't have a guest, but she said, it wouldn't be as much fun.
Posted by Shasta Matova at 1:41 PM

I'm glad you all had a good time, you're so right about the shopping - stuff doesn't stay there forever! All your activities sound like fun.

I HATE coming up with dinner ideas. I'd eat out every day if I could.

Wow, you did a lot of fun things! I may come and stay with you and just share one potluck for the week ;) Just kidding!!! You know I'd make you finish a quilt..just a tiny one that you already almost finished ;)Finish it soon and when I say when, register and mail it. It could actually go to the International Quilt Festival in Houston. So, do I have your attention yet.......???? ;)

sounds like a really fun time was had by all - makes me want to go bowling!
sorry your visit is over.
More time for quilting now, maybe?

I'm just now getting around to visiting blogs and I didn't even realize you had another Japanese student this year. Sounds like she was willing to communicate and enjoy herself.