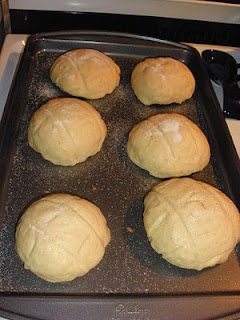 The double work (sometimes triple and quadruple and whatever comes after that) continues to go on in my attempt to whittle down the to-do list. The pharmacy and the doctor still haven't figured out the last prescription, the oil change place had a computer glitch that doubled up all their appointments, etc.

Even the baking had to get done twice.  My daughter wanted to make melon pan.  It's a Japanese dish.  It is a bread with a cookie on top of it.  Since she hasn't cooked from scratch very much, and this is a complicated recipe with both bread and cookie, I told her that we needed to make it together.  She resented the implication that she couldn't follow a recipe, but in my experience, things always go wrong, and I thought it would be a good group activity.  For several days, she didn't make it at all.

Then finally she relented.  But she decided to use me as a helper to do things, but would not listen to any advice.  The recipe called for very precise measurements, 7/8 cup of water (I think they're converting from Japanese to American measurements) and then said ("you'll probably have to add some more flour").  I told her to add less water, but with a precise measurement, she wanted to follow the recipe.  The trouble was the "some more flour" wasn't a tablespoon here or there, it was almost the amount that was originally put in.  As a result, it tasted very flour-y.  I tasted it, and it was fine.  I would have eaten it as bread, with butter or jelly.  But the Teflon coating on our cookie sheet also decided to come off on these delicacies, so pretty much the (double) batch was ruined.  And the fact that I'm allergic to wheat, so I can't eat them with or without the Teflon coating. 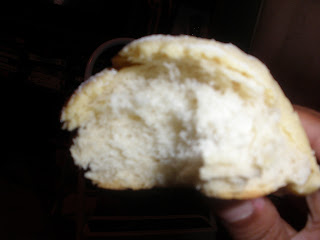 She tried again yesterday, by herself, with a brand new cookie sheet, now that she knew to adjust the water instead of adjusting the flour.  She also used a little more sugar.  She also made them bigger, now that she knew that they don't rise very much.  They look great. She was going to share them with her friends, but now she might have to make another batch, because she says they taste great too.
Posted by Shasta Matova at 11:36 AM

yum - good for her for sticking with it. I get very frustrated when cooking or baking doesn't go well the first time -
sorry things seems to be frustrating, maybe your stars aren't in line at the moment, the good thing is they are always moving

Melon Pan! Yes, I remember Sushi telling me that she absolutely loved Melon pan and that she wanted to make some. That seems like a difficult thing to make... And she also was going to make inari sushi and make her own tofu pockets! Did she ever attempt that very difficult recipe?