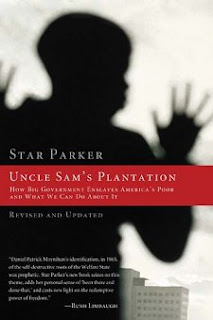 The welfare system has problems.  There are policies that are made to help, but wind up hurting the situation. They lose the incentive to solve their own problems.  And people use the system to what they think is their best advantage.  If you only get help if your electricity is shut off, there are people who will deliberately not pay their bill until their electricity is shut off, so that they can get the help.  There are cutoffs for certain programs.  I have experienced and know several people who, by making an effort to help themselves, have wound up ever so slightly over the cutoff for lots of help.  There are moral and ethical issues about which is better, so we decided that we are better off in helping ourselves, but not everybody makes that decision.

On the other hand, there are people who did wind up getting into situations where they need temporary help.  If you got laid off, or had a major health crisis, then it seems like a little help is appropriate.  Chances are, that if you are financially disadvantaged, your friends and family members are also living on a shoestring, and would be less able to help you.  It is a complex, sticky situation. While there is a lot people can do to help themselves, there are some conditions that some people are born with that are beyond their control.  How do you help people that need help without making them dependent or tempt them to work the system to get the most they can?

In my view, there aren't any clear, simple solutions.  But we do need to find solutions, so a book that purports to provide them sounds like a worthy read.

I got the book Uncle Sam's Plantation: How Big Government Enslaves America's Poor and What We Can Do About It by Star Parker from Booksneeze. It is about how the "government manipulates, controls and ultimately devastates the lives of the poor."  The title was very intriguing.  I was expecting to learn more about what was wrong with the welfare system, and what she thought were plausible solutions.  I was trying to imagine what life would be like if there was no welfare.

A book that talks about different aspects of the system, and explains what is wrong with it, and suggests a better alternative for that aspect would have been nice.

I am having a hard time figuring out how to discuss this book without talking about politics.  This book obviously espouses the Republican philosophy, and is anti-Democrats.   I personally don't choose between either Democratic or Republican philosophy - I like parts of both.  The world isn't black and white, and it seems like you have to see it as such when you choose one.

It was a rambling book - talking about the difficulties of defining poverty, stating that raising the minimum wage meant either raising prices or laying off people, problems with her mother working while on social security, education, health insurance, etc.  I was struck by the fact that there were some facts that were pointed out without any citations, and but mostly it was conjectures that were purported to be facts without any evidence. There are no footnotes or bibliography.  There were also Republican philosophies that had nothing to do with the subject of the book.

She talks about the changing face of America, with fewer people getting married, more out-of-wedlock babies, etc., but doesn't state how this should affect policies.  I think the implication is that all of these things are a result of Democrat philosophies, and somehow going back to the old ways would be best, although she doesn't say how that could be accomplished.

I was looking forward to the "What We Can Do About It" part of the book, which was at the very end, but it seems like the only recommendation was "A bold Republican agenda."

The book was interesting enough, but it is basically an Anti-Democrat book, and there were no realistic solutions. It spent so much time complaining and not enough time explaining how her way would be better.

I received this book for free from Booksneeze in exchange for my review. You can click on the link to read more reviews on this book.
Posted by Shasta Matova at 12:55 PM

I think I'll skip this one - I don't like either party myself, I think they're all crooks, lol. And there has been enough complaining about the problem, it's time to come up with viable solutions. Seems like everyone is too busy pointing fingers to do that!