I have been thinking about time.  I was looking at city directories for 1900.  Since the family appeared there, I needed to keep searching backwards to see when they first appeared.  It just seemed like the family wouldn't be here earlier, because the parents were elsewhere, but some of them were.  In fact, I found one of them in 1895, and I still don't know if that was when he came, since that is the age he would have been old enough to have his own place and be in the directory.  It felt strange looking at the directory from so long ago.  They even had a colored lithograph in it.  And it was in pretty good condition for being so old. 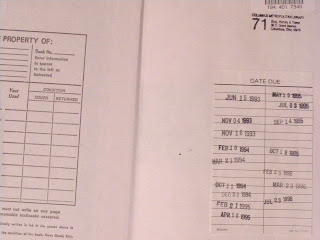 Then I got a general history book.   It is obviously a school book. I like those - they are easier to read and get a broad understanding  On the left side, there are spaces to mark the student who is using it that year.  Remember when we had to do that?  Do they still do that?  On the right side, was a sticker showing the old library system, with due dates stamped in the paper.  Above that is the bar code that we use now to electronically scan the book.  At least it didn't have the older card in a slot in the book, with borrower's names written on them.  I liked looking at those and figuring out what kind of people would read that book.

This last thing, the library book, is what makes me feel old.  The oldest date in the book, 1993 doesn't seem that long ago, but it's almost two decades ago, before some kids about to graduate from high school were born .  And so it is ancient history to all of them. It won't be long before they get their own place and start showing up in city directories, for as long as they continue to make them.

I hear a couple of cities are giving up publishing the white pages. We'll have to tell the people being born today about a time when we used to get a whole book that listed all the people in the city delivered to us annually.
Posted by Shasta Matova at 9:40 AM

And my "grown" kids want me to toss the old phone books. No way, I use to keep them for towns we use to live in so that I could look up a business and have some last minute gift "delivered". Now of course I can google them and proceed.

funny - the other day I pulled out a drawer of the old card catalog at the library just to look at all those note cards.