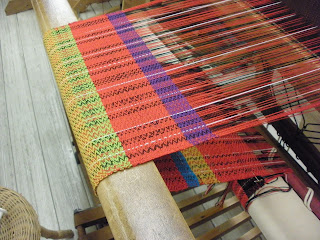 At our weaving class, I continued to work on the abandoned piece. A previous student had abandoned it, so I could just play without guilt. I added some gold because I thought the gold would make the red and black look Christmasy, but it made it look African, so I went with the African theme and added random amounts of other colors.(The color is off in the picture - that is red, not orange).   I started making random patterns, but since this was supposed to be my training piece, I forced myself to get practice on following patterns.  Instead of winding bobbins, I tried to use up bobbins other students had left, although I did add other colors as it pleased me. I really like this piece, it was fun to play with it.  I might add some other colors and use it as a table runner or wall hanging. 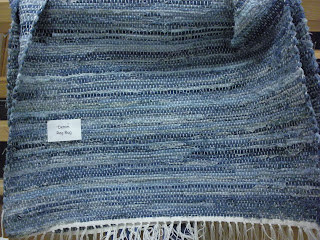 But it is time to start my official piece.  When we went this time, she had a denim rug on display, and I have decided to use denim instead of my original chosen material.  I have lots of jeans which I acquired when I made a jeans quilt, and this will reduce some of the stash in my house as well. 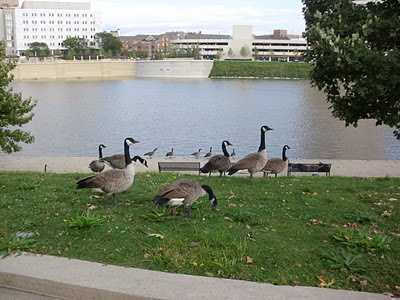 After our class, we walked around some more in downtown Columbus.  Both my sister and I used to work downtown, and we both really miss the walking we did there.  And they have added more walking paths, with fountains, benches, planters, piped in jazz music, with the new Scioto Mile, so it is very pleasant to walk and hang out downtown. We saw many people jogging, many with their dogs.
Posted by Shasta Matova at 7:22 AM

This is so fabulous!! But now I am so confused. Are you weaving with fabric strips (aka the jeans comment) or are you using yarn?

Oh my - that is just gorgeous!!! And I love the denim rug too - how will you weave with the jeans? That looks like a really lovely walk! The geese are enjoying it. *G*

I think we are all curious about the denim weaving. Looks like you will have to do an online class. I love the colours in your practice piece.

A denim rug sounds so great! And to be able to make it on a loom! I envy you and can't wait to see your progress. I've been trying to think up a crochet project to make a rug but that may never get off the ground just because I seem to have four or five other projects lined up...