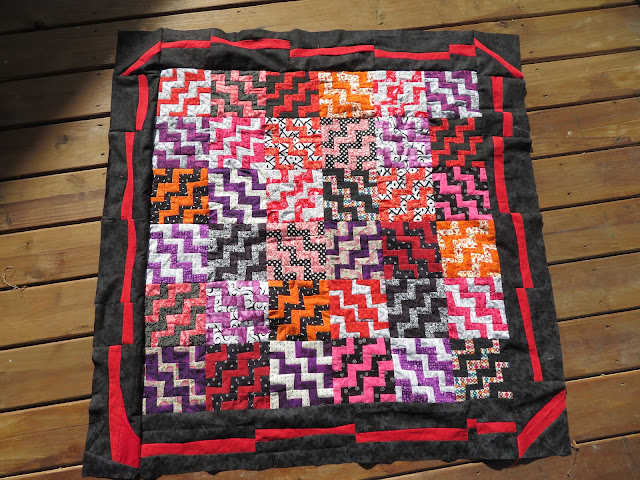 There are some quilts which make decision-making easy.  The next step is pretty clear, and it is easy to tell which decision is right and which decision is wrong.  This quilt is not so easy.  It wasn't difficult for me to decide I would make a rail fence and triangles for the borders. I was doubting myself because I didn't think I had enough bright colored fabric for the border until Wanda said I could make black and white border.

I doubted myself throughout the process, and the first two rails didn't inspire much confidence. It wasn't until the last border was put on that it looked like using a rail border was a good idea. 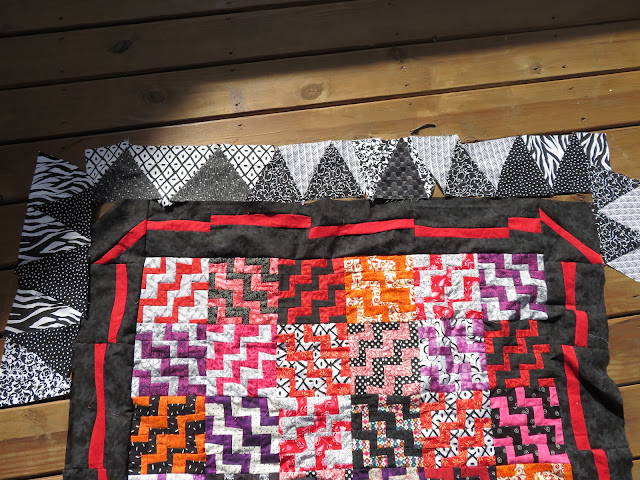 One of the decisions I had made was that I liked the black triangles against the black rails.  I like the way they merge, but this means that the white triangles, which is probably what people will see when they look at the quilt, point inwards. Which could be good because they draw attention into the quilt. 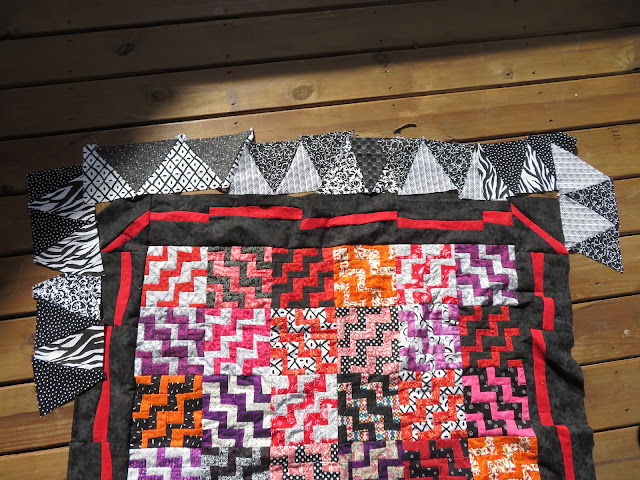 But don't most people expect the points to go outward, radiating like a star?

What do you think? I was going to put the triangles all the way around so it would be easier to see the whole impact but it was windy and these pieces are not stitched together. I was worried they would blow away.

I like the black triangles against the black rails too!

If you like the size with just the rails border, I think it looks finished. You can use the triangles in another quilt so there is now loss if you don't use them on this one.

Using the white points with tips outward makes me feel like all the dynamic energy within the quilt is moving out. I prefer the dark points myself. I feel this whole creation has a medieval feeling. It's wonderful.

I like the dark triangles against the black border! And the rails are very interesting! The really go with the rest of the quilt!

Hi Shasta! What a fun quilt, and I really LOVE the addition of the rail borders. I think it looks finished with just that addition, but do what makes your heart sing. The triangles look too busy to me - but who cares what I think! It is lovely either way and a great quilt top. ~smile~ Roseanne

I find that a lot of times I don't like scrappy as much until I have finished it.

As far as which way to put your triangles! That's a tough one. I think I like the black against the black rails.

I like the black triangles next to the black rails. Nice looking quilt! Thanks for commenting on my blog!

I like it without the triangles!
And I really had to look to see there was any difference between the two photos with triangles. I think my eyes want to stop at that glorious red/black border and just take in all the fabrics in the rail blocks.

I do like the triangles.. :) But you need to go with what you like best!! In any case it is a really cool quilt :) xx

I think you can go either way with those triangle borders. The white pointing in will draw the viewers eye back into the quilt. All that matters is that you are happy with the final project. It's going to be a very dramatic quilt either way.

Sometimes decision making in the design of a quilt is tricky, isn't it. I rather love the triangles. With the triangles dancing around the border it draws my eyes in to your quilt. I like the black base of the triangle on the black rails. I think the triangles lighten the quilt and makes it even more interesting.