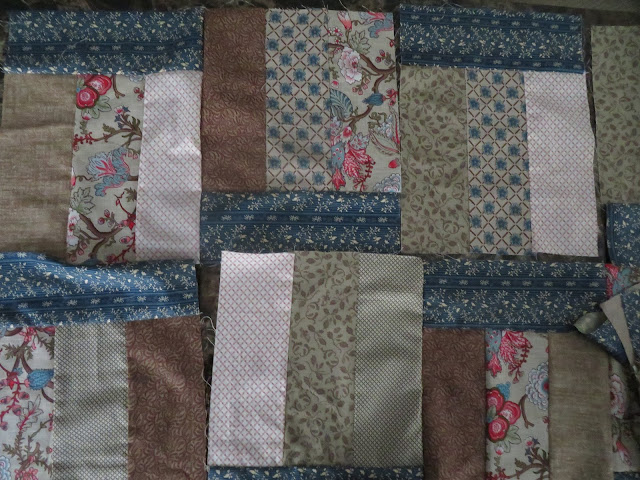 It's been a flip flop kind of a week for me, so I thought it was appropriate that I make these flip flop blocks for Stitching Sisters. It is another one of the kits I picked up when I went last time. I had originally thought I should give them a finished top and return the other kits and tell them that I got carried away, but I decided to try to make another quilt top since it is taking me so long to get one back to them.

I was expecting strips of fabric that I could strip piece and subcut them to the proper size, but they were all cut as separate pieces. The vertical strips are cut longer than required by the pattern, but instead of trimming them to fit the pattern, I will use them as they are, and just put borders on the sides and not on the top and bottom. Less work for  me. I don't think the quilts are required to be a certain size.

I had searing pain on my jaw and got a root canal. I was really happy that the dentist was able to see me the next day and take care of it right away, but when they took an x-ray at the end, it looks like he didn't go deep enough so I will have to go back in to get it redone.

Another thing that made it a flip flop kind of a week was that I called the sewing place to see if Opal was back from the spa. He said no, it wasn't there, and they just had a delivery and it wasn't in there and there weren't any Opals there. But after I asked him questions about where it was in the process and how long it would take he said that it was there and I could pick it up. When I went to pick it up, I asked him when they had gotten it, and he admitted they should have called me to let me know it was ready.

Also, I was supposed to have work for a little bit this week, so I treated myself to lunch at a restaurant after the root canal.  I know taxes and insurance would take all/most of the money but I felt I deserved lunch after that dentist visit.  I came back to find out there was no work. At least I could rest and recover.

So yeah, it has been a flip flop kind of a week, but it worked out okay and there were good things in there with the bad.

I spent this week sewing the flip flop blocks and have put them in rows. I need to join the rows and add the borders on this and the previous quilt. It's been super hot and I didn't feel like pressing a quilt top.

On the cleaning front, I have removed all non craft stuff out of the craft/sewing room.  Instead of tackling the craft supplies, I decided to process all the non craft stuff and take them to their final destination before working on the craft stuff.  I did most of it as I went along, but I saved the really time-consuming stuff to do downstairs. Zeus has arthritis and although he is doing better, he does not come up the stairs anymore, and I have a box of paperwork that I need to sort through and file/recycle that I can do downstairs.


Linked with:
15 Minutes to Stitch
Moving it Forward
Posted by Shasta Matova at 4:12 PM

Ouch! You have to go back? I hope they won't charge you. It seems like it should be free - or maybe they should pay you. Glad you're still able to sew.

That really sounds like a flip flop kind of week! I’m in the middle of dental surgery appointments and I will be glad when they are done!

Sorry to hear you have to make a return visit to the dentist and sorry to hear there wasn't any work for you do either. Oh well, you just gained back some of the time to sew that you're going to lose by the return visit! Keep on sewing!

You flipped, then flipped, and seemed to have landed on your feet. Sorry about the dentist.

Ouch, not fun. But you salvaged the week nicely it looks like.

Emergency trips to the dentist aren't fun, but at least you aren't in pain now. Sounds like you've been doing a great job on cleaning up the sewing room. Happy stitching this week.

Ooh yuck! A root canal! A funny family story is that quite a few years ago my son had to have a root canal and the dentist kindly showed him a video of the process that would be done the next week. My son walked out of the examining room and into the waiting room and fainted! Just from watching the video!

Hope your second surgery goes better and is final!