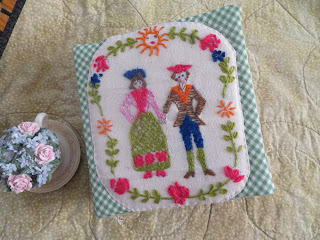 In May, I had shown you my progress on my Seiring family genealogy book, but just realized I had never shown you the completed book.  For such a book, "completed" is misleading because I always reserve the right to add some other embellishment, quote, or document. 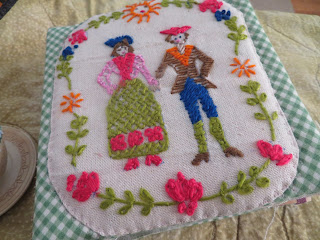 The cover is the stitchery kit that I found at the thrift store and took as handwork during several out of state trips. I added a batting in the back and it makes for a nice soft cover. There is also cardboard in the layers, so it is also sturdy. I used a cardboard box as the base, so I didn't have to join the cardboard together. 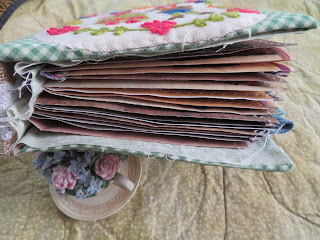 This book features one ancestral couple, John and Anna Hahn Seiring. The name is also spelled Siering. Like the Priest family book, I took 12x12 sheets of scrapbook paper and folded them in fourths and sewed up sides to form pockets. There are four signatures, two scrapbook sheets per signature. It is very important to have a very big spine to accommodate all the bulk in the pockets. 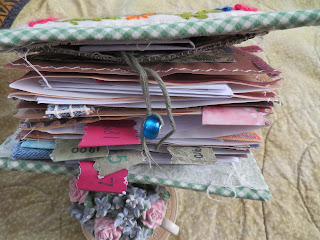 Each of the pockets has documents about the couple - birth records, immigration record, census printouts, marriage records, plat map of the property, tombstone photos, etc. This way, the viewer can uncover the facts one at a time, just like the genealogist does. 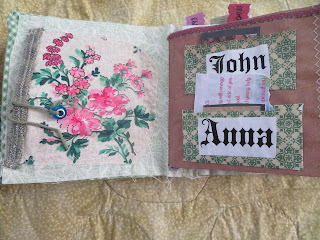 In the Priest book, I added the year on the back of each record in the pocket.  This time, I added a tab that had the year of the record to make it easier to pull out of the pocket and keep track of the passage of time.  I really like these tabs and plan to do that on all the future books.

In the photo above, the back of the front cover has a fabric pocket embellished with trim at the opening. A tag with a bead dangle is inside the pocket.There is also an ancestor chart in that pocket so that the viewer can figure out their relationship to the couple. 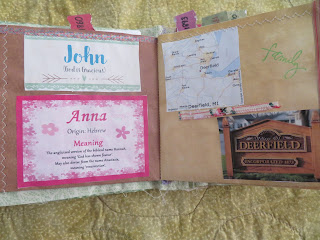 For this book, I did not include a lot of genealogy information on the pages themselves, although there are maps and information about the town and their occupation. This makes the pages more flexible in what documents are put in each pocket. There is generally a pocket for each 10 year period, but they can be rearranged if there too many or too few documents in a particular 10 year period. 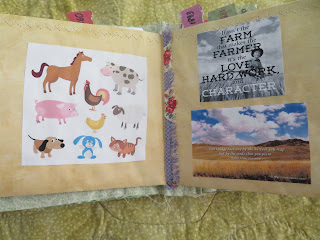 On the rest of the pages, I included pictures about the occupation (farmer), location of the couple  (Deerfield, Michigan), quotes about family or family history, and random bits of fabric and whatever else I felt would add some interest to the pages. 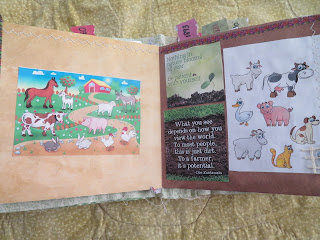 I did not worry about trying to make the decorations period specific.  Although that would be nice, since all of the couples are of the same generation (great-great grandparents), I wanted to have some variety in my choices of embellishments. 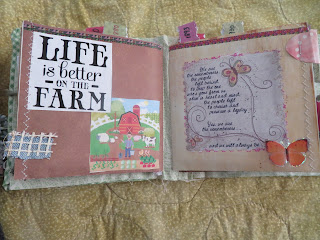 I started making the book before March of 2019.
The tab on the left is made out of a scrap of jeans and trimmings of a latch-hook project.The butterfly on the bottom right is a dimensional sticker. I used a wooden button in the Priest book. 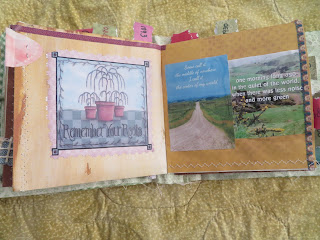 I didn't record the finish, but I stopped adding to it more than two months ago. 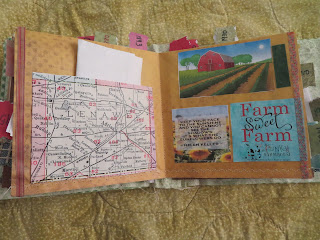 The map above is glued on three sides to make an additional pocket. 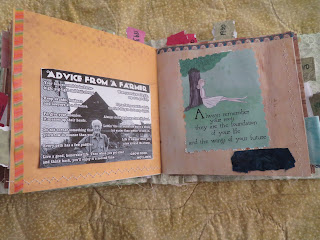 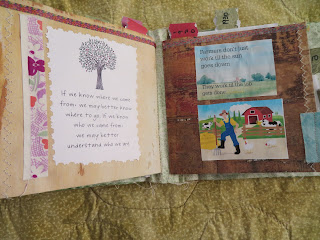 I didn't have any family pictures. I have thought about adding period photographs to a future book, if there is one, so that the viewer would be better able to place the couple in the correct historical context. 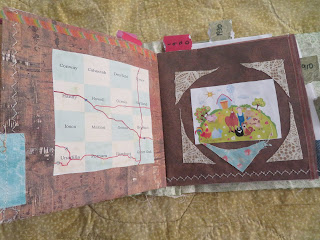 The "frame" on the right side is fabric scraps. 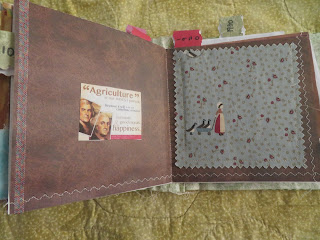 I didn't add a lot of other pockets or folds to this book, but there are a few. That charm square on the right is a pocket. I sewed it on before putting the book together. 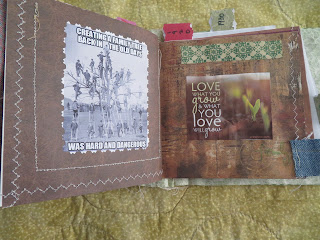 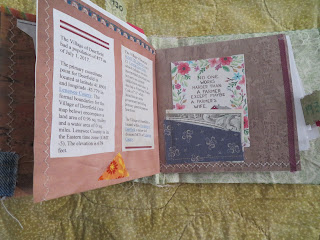 I glued the thing on the right on the left and bottom so it serves as a tuck spot for the quote. It came from some junk mail and I glued some fabric on part of it. 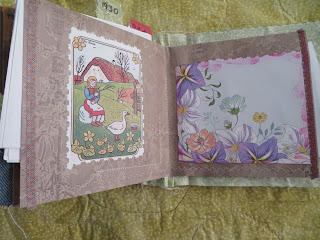 Most of the pictures came from the internet. The one on the left is cut with the special scissors. They are pretty inexpensive when you buy a pack or get them on a back-to school sale. 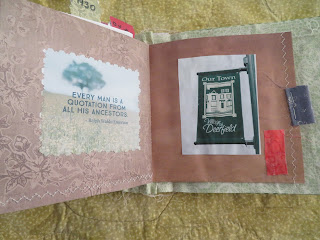 The back cover is plain green plaid, and the spine is the same as the Priest book. I think it is a nice way to preserve the history in an accessible format.
Posted by Shasta Matova at 3:40 PM

This is awesome! Love it, especially how you incorporated found or reused items. Just wonderful fun!

Fascinating project. Thanks for sharing and giving me some ideas along the way.

What a treasure! This is so unique and meaningful; I am inspired to do something similar as a record for my own family. Thank you for sharing!

Wow this is absolutely amazing!

A very cool idea! A great way to make the history accessible to others in the family.

Wow! What a very cool way to record some of your family history. This is great idea.

This is an amazing creation, what a family treasure!

This is so cool! I love it.

What a work of love. Your book is a treasure!