Having finished a couple of small quilts, I decided to take inventory of my current works in progress and their current status.  I am hoping that this will help me see that progress is being made during the spring and summer slowdown. These are just the quilts I have been working on in the last few months, and not the other unfinished projects that are stored away.

Some people might be overwhelmed by the number of projects listed here, but I really enjoy getting to choose which project I want to work on. Since they are not standing in a straight line, being worked on one at a time, in order, when progress is made on one quilt, the whole group is making progress.

Here they are in no particular order. 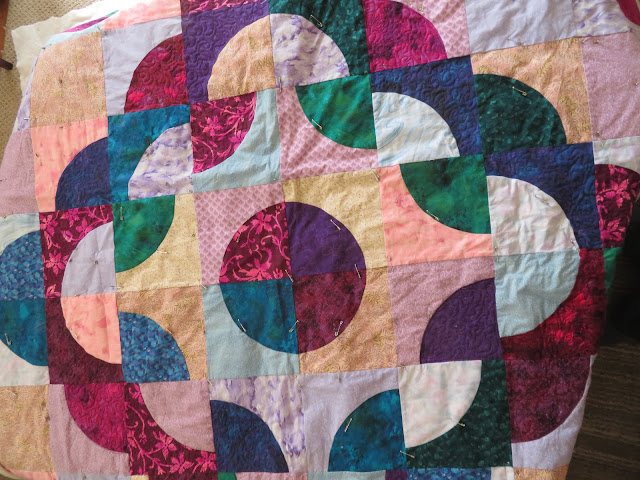 Ethnic Drunkard's Path was started in August 2003 and it is the closest to completion. It is already basted and a lot of the dark purple and blue spaces have been quilted.  I need to finish quilting it and bind it.  It is a fairly big quilt -  a big lap quilt. 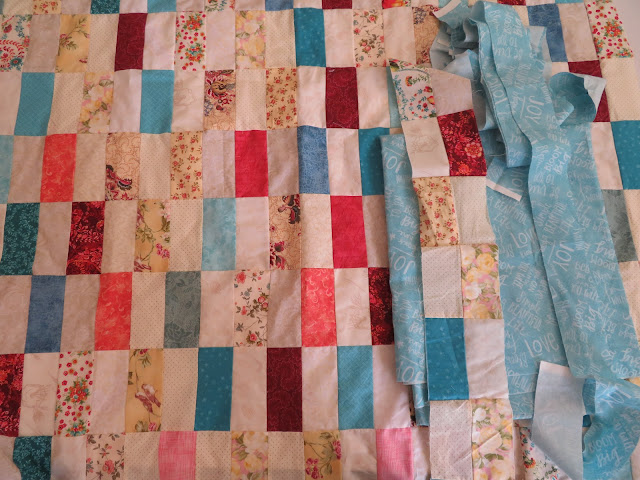 Colonial Bricks was started September 2018. It has been pieced and the backing and binding fabric has been chosen and cut. The backing needs to be wider, so I am piecing the leftovers to insert to make the backing wider. 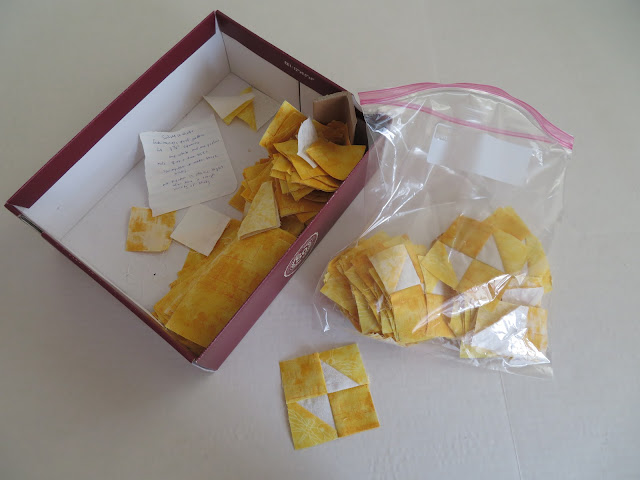 Sunlight in Winter was started December 2018. I am making the blocks one half yard of yellow fabric at a time. I used up half a yard of the butterfly fabric, and half a yard of the grunge fabric. I had a whole yard of the grunge fabric and since it is the darkest yellow, I decided to use that half yard to make the squares because I think the squares will show the pattern and it is my darkest yellow.  All of the yellow fabrics are very similar. I like that look but will consider adding more patterned yellows when I am closer to completion. I will not make the whole blocks until all of these subblocks are done. 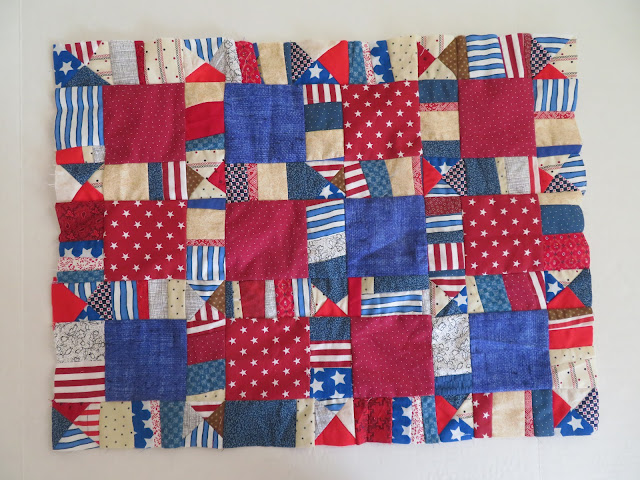 Uncommon and Unexpected was started February 2019 as a part of a quilt along.  One of the things I really liked about the original quilt is how the cornerstones made the sashing look like circle dancing around the squares, and my eye moved from one overlapping circle to another.  My quilt does that, but the diagonally placed squares, and the striped fabric, and the small number of blocks stop the eye from bouncing too easily at the circles.  I want to add more blocks to help show more of that movement. Some of the border has been pieced but I am still thinking about how I want to accomplish that. 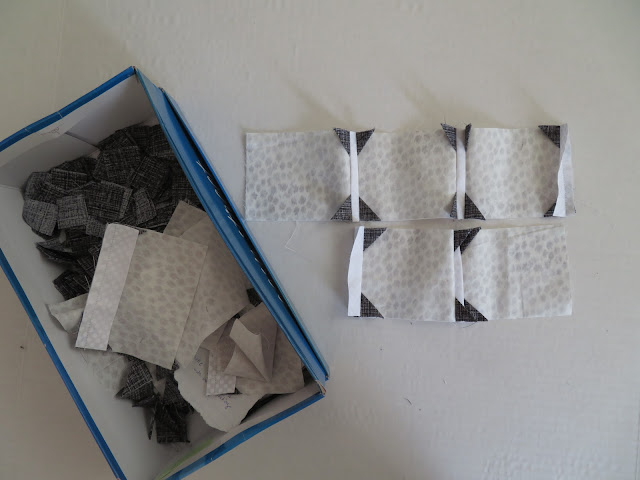 ATC Holder was started November 2018. It doesn't look like a lot of progress has been made on this, but there has been.  All of those photo corners have been cut and pressed. I think that was the hardest part.  I need to strip piece the cornerstones and once I do that, I think I will be able to piece this pretty quickly. There isn't any decision making left on this quilt until the center has been pieced. It is deliberately plain to let the ATCs stand out. 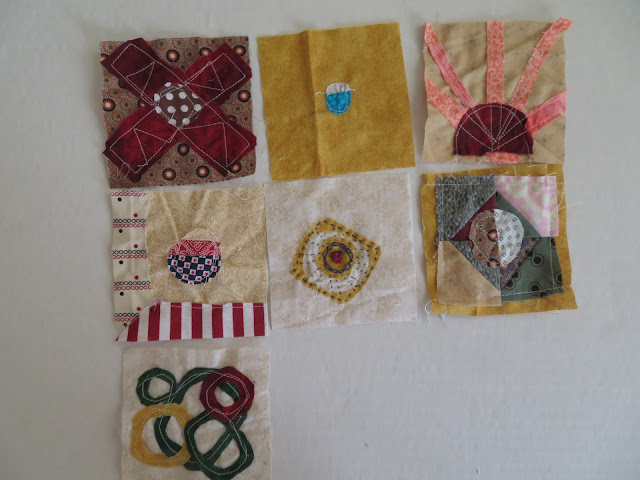 Circle 365 was started November 2015, and I have been sporadically working on this quilt since then. I am putting the circles together into the quilt top when I have enough, and it is 2/3rd done. The quilt is getting pretty big now so I have decided not to take it out since my blog readers have seen this quilt grow from time to time. 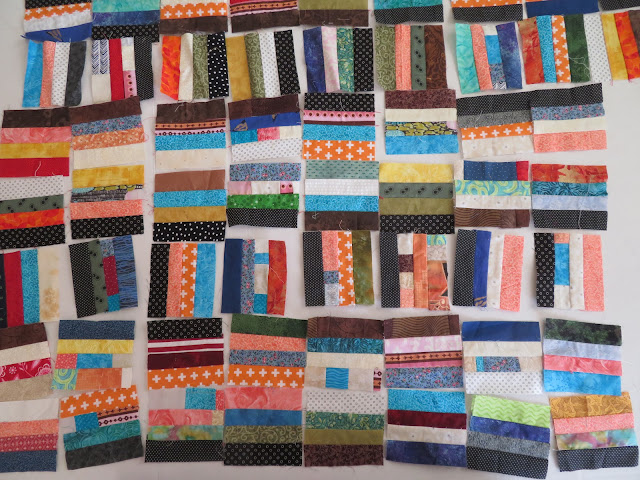 Fourth Rail was started January 2019 as a leader / ender to use up scraps.  The layout has not been decided but this one looks pretty interesting to me. I have a lot of pieces already cut so it is just a matter of sewing them together. 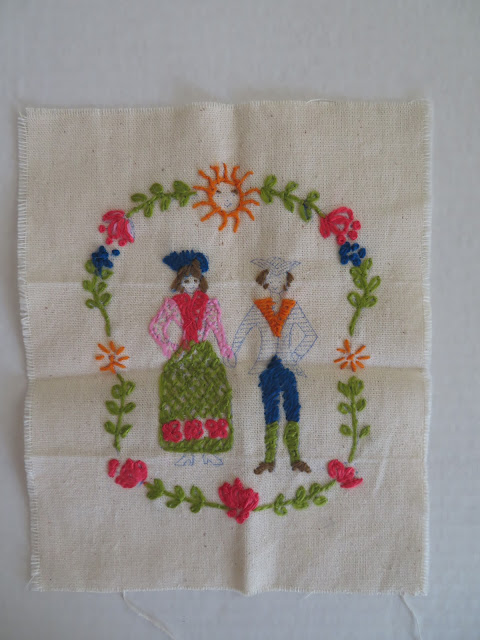 You probably forgot about this stitchery, but it is pretty close to completion. It's been a while since I worked on it. The first time I mentioned it on my blog was August 2018, so it was started about then, but I  bought the kit from the thrift store a long time before that. It is made with yarn. 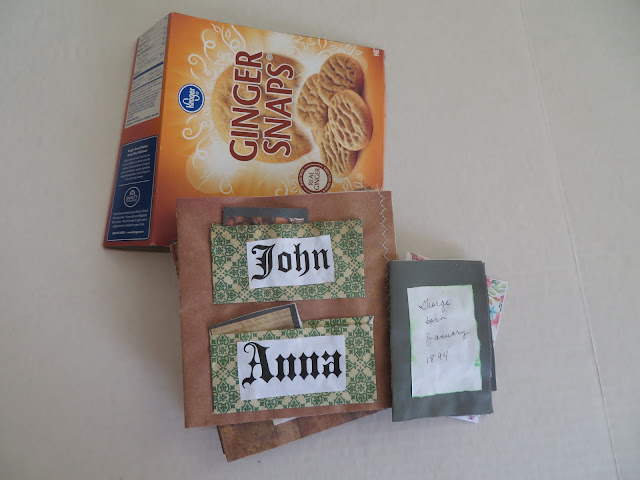 I don't think I have shown you this genealogy book, but I started it shortly after I finished the Priest Genealogy Book in December 2017. I have the pages all ready and all the genealogy information has been printed. I need to make the cover, add the genealogy printouts to the pages and embellish the pages a bit more. The cookie box is going to be used in the quilted cover to give it more stability. 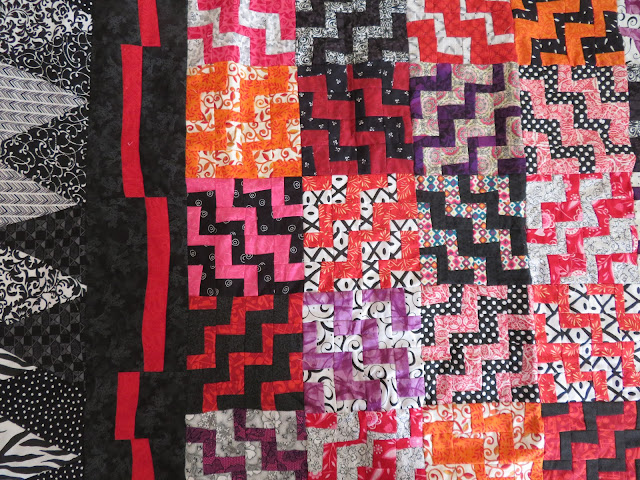 I showed the Cultural Fusion Rail Fence as part of the Dust Off a Quilt Book Blog Hop. It was started November 2015.  The quilt top is done and the backing and binding fabric has been chosen. 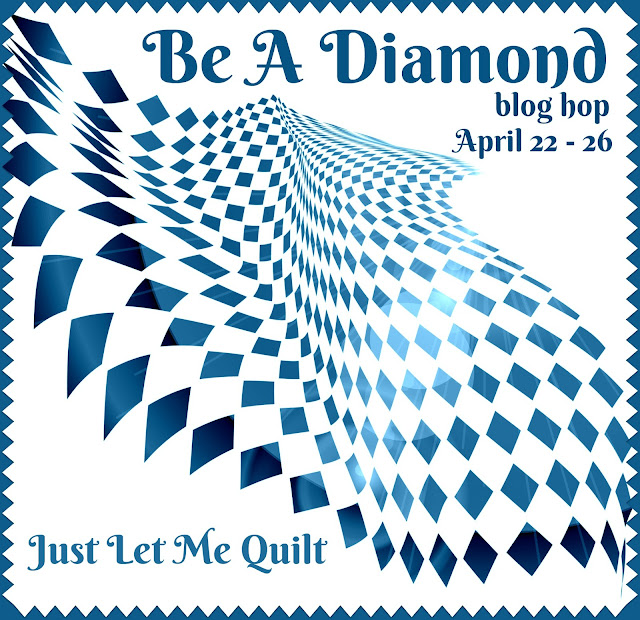 I will be taking a part of this blog hop. My day is April 25. I want to keep it simple so this will be my April mini of the month. 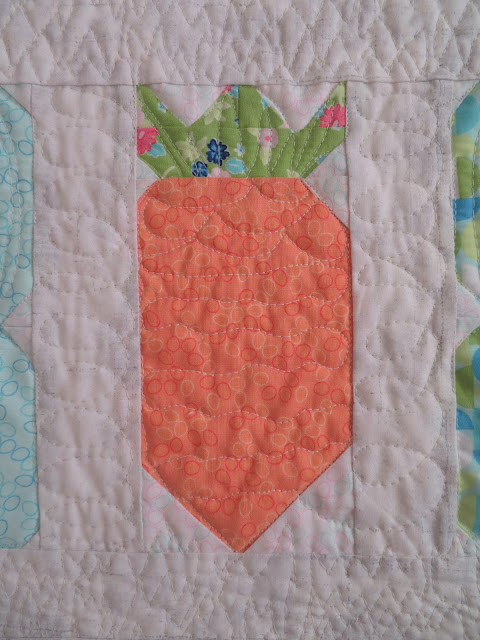 I am giving you a sneak preview of this quilt which I finished yesterday. This is a free pattern from Moda Bakeshop called Bunny Quartet. The designer of the pattern also provided a tutorial for a carrot on her blog, which I used as you can tell from the photo.  So my bunnies are a trio and not a quartet. She changed the name to Easter Parade, but since I have Elephant Parade quilt in the works, I am going to call it Bunny Parade.

Since it is a bunny quilt, I will show the whole thing to you on Easter. Since the diamond quilt will be my April mini of the month, Bunny Parade is my May mini of the month, so I will also show it to you again in May as a reminder. I don't want you to get tired of it so I am only giving you a preview now.  I know from personal experience that if you buy a Christmas present in July, it still counts as a Christmas present, even if you can't wait and give it to the recipient in July.

Since I pulled up my spreadsheet to record the finish of the bunny quilt and give you the start date for all these quilts, let's talk about the stats, shall we?  I have started 127 quilts and have finished 99 quilts, which is a 78% completion rate.

It takes me an average of 242 days to complete a quilt. This number has gone down, mostly because of all the mini quilts I have been making lately.  A lot of my quilts get done much quicker than 242 days, but I also tend to pick up projects that needed an incubation period. When I get an old UFO completed, that average number of days to completion goes up, but that won't stop me from working on my UFOs. The stats are there to record my progress, not to tell me what to do.

I spent this week making the Bunny Parade quilt. I also took inventory of all of my works in process.

Linked to:
15 Minutes to Stitch
What I Made on Monday Yes I did make all of these today, why do you ask?
Peacock Party
Posted by Shasta Matova at 2:34 PM

I loved hearing about your progress. You really do a lot of different types of quilts and patterns. I'm in a finish it up mode so I've been going through my inventory too. My problem is that when I get out something I haven't finished - I change my mind about the end result and add more work for myself. For instance, I decided to replace some white alternating blocks on one of my finished tops, with another color. Once I got everything unpicked, I decided I need to replace four squares in each block with another fabric. (Gasp!) I like how you keep track of everything. I keep track of what I'm making and finishing but I don't have start or ending dates. That would be interesting to keep track of.

Your quilting is so diverse - I just love seeing your progress. You make a LOT of quilts!!!!!

Wow, you've got a lot going on! Love the scrappy rail fence some of my favorite kind of random sewing! And Congratulations on the Fusion Finish!!!! It looks great! Sujata Shah was just at our Guild last Month I really like her style and her colors!

Nancy in NV-wheres the dude at blogspot said...

Woo Shasta!! And your math skills!! lol Loving your eclectic mix. Thanks for sharing your projects you are so inspiring. Now I need to catch my breath. ha

I had to go look at your genealogy book. I love it. I have a lot of genealogy information and scrapbook materials and have it on my list to get the info in scrapbook form now that I'm retired. Otherwise if something happens to me no one will be able to make heads or tails of the drawers and folders of documents.

You have a great variety of WIP's. Something for every mood or moment of time.

You've got lots of fun projects in the works. It is nice to have more than one project on the go, that way if one is being cantankerous, you can focus more on another one on the list till you get the desire to fix whatever went wrong with the other project. Congrats on on 100% on stream with stitching time. Hope this week is better than the same week last year. Thanks for linking up with the 15 Minute Challenge.

You have a lot of lovely projects to work on! I like listing mine out too... makes me more motivated to work on them :) xx

What an abundance of quilts! It is amazing what a commitment to 15 minutes a day can be such an inspiration to creative hands.

Wow! I thought I had a lot of UFO's! You are amazing. Unlike me, you will finish all yours eventually. I'm looking forward to seeing what you come up with for the April mini. I will be posting March minis next week. Happy stitching!

Great on stitching days! Your projects all appeal to me, and I like the leader ender - when I finish my Vortex, finally! So much fun to use scraps!

Beautiful WIP projects Shasta!
I really like your scalloped border butterfly quilt in your previous post, thanks for
the great tutorials.

I don't keep track of all my wIP its better to be ignorant of UFO's Great stitching record.

I, like you, prefer to work on more than one project at a time. I get bored doing just one.

That's a lot of projects! You have a wide range of styles and that's what makes quilting interesting! I tend to keep my projects at a few at a time, for me it works!

A great selection of WiPs. I too like to have a few things on the go at once, it's never boring around here!

So fun to see your works in progress, and to know having a bakers dozen (or more) projects in the works isn't uncommon! Still working on my Quilty 365 project too. One of these days it will be a finish (I hope)!

Your list is fantastic, and you're right that posting about it can help motivate you when you see how you've progressed over time. Can't wait to see what you get done! Thanks for linking up to What I Made Monday.