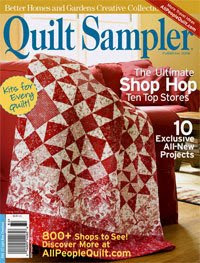 As a followup to my grocery post, I want to let you know that I had to go shopping on Wednesday. I was disappointed that I had groceries to buy just a few days into the experiment, but I was out of Special K cereal, and I have that every morning. I planned a big shopping expedition, with the help of CouponMom, armed with shopping lists, and paper clipped my coupons to each list. I also took my coupon box with me, just in case.

First, I went to CVS. On Thanksgiving, I went there to buy a bunch of free stuff. They gave me coupons "Extra Care Bucks", which can only be used at the store. It is easy to count the "free" twice, on Thursday when I got the coupons, and again when I use the Bucks. I am trying hard not to do that, so I made a list of things that were on sale that I wanted / needed / would buy anyway. The only splurge was a quilt magazine. The prices were the same as the sale prices at other stores, so I could stock up on normal stuff. I was also looking for gift items. My family members don't have a need or want for small appliances, and I couldn't see anyone getting excited about any of the other items. I wasn't able to use up all my bucks, and got some more on this trip, so I will have to make another trip later. The cashier didn't look happy that I was buying so much stuff. I did have to pay around 50 cents. She said I could use a $1 Buck and lose the rest, but I'm not about to lose $ like that. I don't really care for the Bucks, since you can't use them in whole. They are all in weird amounts, the price of what was purchased, so adding isn't so much fun. And you have a limited amount of time to use them up. On the plus side, I didn't have to fill out any rebate forms.

Next, I went to Walgreens, just for the free stuff they had - foil paper and tape. Everyone was really friendly, and I had several people ask me if they could help me. The cashier found me while I was shopping and told me that she had some coupons for me to use. I told her I had coupons, but if she had a bigger amount, I would be happy to trade for them. I was expecting to get just two things there, but I managed to get about $30 worth of stuff practically free. They had mascara buy one get one free. They had packages of mascara that had two tubes in them - they were buy one get one free. When I combine them, I could get four for the price of one. I had a $1 coupon, but I traded it for a $2. Very nice. For my total purchase, I had a gift card (due to other free after rebate stuff) that I used for the small balance. I'll get $2 of that back in rebate for the tape. I like that the gift cards don't expire, and you can use them in whatever increments you want. I do have to complete a rebate form, but they make it easy because you can do it online, and you only do one form for all the items you bought that month.

Then I went to Kroger. I bought my cereal. It wasn't on sale anywhere, so I bought the largest box to get the best unit price. I also bought milk and bread. And some frozen food. While I was waiting in line, I checked my coupon box for other things I had bought just to see if I had a coupon - and I did! I found three more coupons I could use. I hope I don't lose coupon opportunities like that on a regular basis. I saved about 50% this week, not as good as the 60% last time, but very nice nonetheless. In total, I bought about $30 worth of things. I can't find the receipt, so I can't separate out the non-food items. And I don't know how to count the spaghetti and spaghetti sauce, since it will be shared with other members of the family. There is already a month's worth in the house just for me so I am not going to count it. I am going to guess that I spent about $15 for food for me. I don't think I can manage the rest of the month on just the remaining $15, but I think it would be worth documenting how I do anyway.

Then I went to Staples and got some paper, also free with the rebate and coupon. Overall I was very happy with my purchases. I came away with many bags of things, with minimal impact to my credit card.
Posted by Shasta Matova at 1:30 PM

Have you ever thought about hiring yourself out to do people's shopping? I'm sure a lot of people (me included) find all that coupon stuff and figuring how to get the most for your money much too difficult. You could sure save people a lot of money!

Wow, you're my hero! I do coupons, but nothing to the extent you are doing.