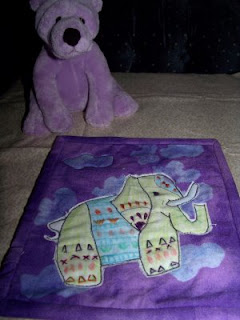 I cheated in the virtual Quilt Festival by giving you a link to an older post, and not following the rules exactly. The rule is to feature my favorite finished quilt. Amy was being very tricky by including the word "finished" in the rule. A lot of the quilts I thought would be fun to share were not finished. I haven't finished anything lately, and I've been wanting to finish them, and to start new, "quick", things. The other reason it is hard to choose, is that I don't have a favorite - it depends on what mood I'm in at any moment of time. By the time I am finished photographing it, and am ready to blog it, there might be another favorite quilt! 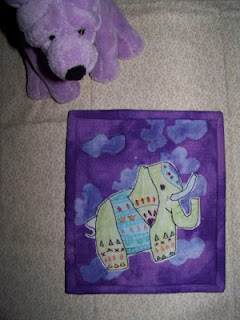 My feature quilt is this little elephant. I had a lot of fun making it. There were no rules - I made it just for myself. First, I was playing with bleach. I found this technique on someone's blog and decided to try it. I took a potato and cut it in the shape of an elephant. Yep, just like in grade school. I felt very young again, especially since I applied grade school standards to this project. Then I dipped it in some dishwasher soap that has bleach on it. I stamped it on a scrap of fabric I had laying around, because it was a leftover of something or other that I made. I let it sit for a little while until I thought it was done enough - maybe about ten minutes, and I washed off the dishwasher soap. I didn't want it to do too much. I was really pleased with the color that came out, even though the end result didn't really look like elephants. But I figured they were good enough for elephant shaped clouds. Then I dug out a t-shirt I had bought for my daughter a long time ago. It doesn't fit her anymore, and I don't think she wore it very often, but I really liked the elephant on it. I traced the elephant and cut that out of the white fabric which was also readily available. I sewed the elephant on to the background. Since I was in grade school mode, I brought out the crayons and colored away. Then I got out my embroidery floss and embroidered away. Not very creative, since I pretty much followed the same design as the t-shirt. Then I bound it and called it finished! After having had followed rules for postcards and journal quilts, I really enjoyed the fact that this quilt could be whatever size it wanted to be. A fun little project, smaller than a piece of paper. No rules, no worries, just a fun play day.
Posted by Shasta Matova at 10:08 AM

complete play is always the best...

Oh! I love grade school mode! That is so cute! I loved all the other quilts on your other post too!

How fun! And to think that such fun created that playful little quilt.

I love your elephant. I think it is good to let the child come out. Children aren't inhibited by rules. Great little quilt.

THAT IS A FANTASTIC QUILT!!! What fun!!! How nice not to have to follow directions and make something perfect. Just for you!!! Good job!