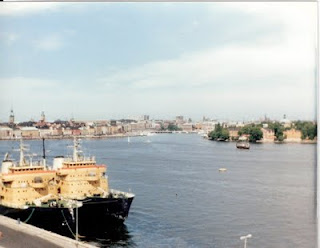 I know that those of you who are following along on my camera history are waiting with baited breath to get the next edition. You can breathe now. The year is 1985, and I took one of those vacations, you know, a big one, where I went to three different banks to borrow enough money to do. I also borrowed my brother's 35mm camera, because I already knew the inferiority of my 110.

I came home with a new lens cover, which attaches to the camera, and rolls and rolls of film that had gone through several airport security checks. I was worried about the quality of the photos after they had gone through those. But these were Special Pictures, so nothing but the best for them. I got the large prints, the 4" x 6", because I knew nobody would really want the doubles, and because they were Special. I figured I could get enlargements and doubles of the really good ones. I apparently wasn't thinking of poor future me, who would only have room for 3 pictures at a time on the scanner.

Well, several of the rolls had no pictures on them. I guess I should have gotten a lesson on loading the film in the camera before I went. I was trying to save money and film, so I put the film in, but apparently not enough for it to catch, so I wound up taking a lot of pictures without film advancing. And since I didn't know what was wrong, I went ahead and wound it up and developed it. These pictures needed manual focusing, so the first day, when I had jet lag, all the pictures are shaky. All of them. All day. Luckily, I had my 110 camera, which is lighter and therefore easier to carry, and I did eventually learn how to load the 35mm. This photo is from the 110. It isn't labeled, so I'm not sure where it was taken.

I am finally finished with 1985 in my box. Only two more years to go. In this box. I will not think about the two photo albums that have the rest of my vacation shots. The ones that aren't blurry. Or the rest of the boxes.
Posted by Shasta Matova at 6:15 PM

Too bad nobody's paying you to do that - you'd have terrific job security! Wow!

It's a lovely photo...no matter where it was taken! And I do love hearing your camera history stories. Won't you be glad when all that scanning is done!

Crud with that camera!

When DH and I were married -- only us two and the minister/Justice of the Peace were there, in a small secluded park, the minister kindly offered to take photos, and wouldn't you know, his and our photos ALL were invisible -- not one worked as the camera was broken. It happens, darn it.

BTW, your blog design is really lovely! I've noticed how all the various colors, designs would be lovely on any quilt.