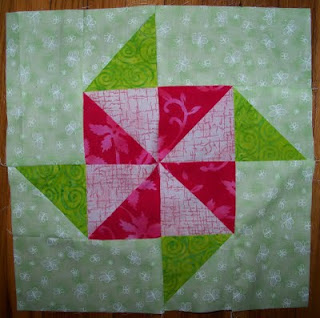 Let me announce that Quiltfest is/was very successful. I managed to finish three and a half blocks for Wildflower Garden. One of them gave me a lot of trouble. I originally thought there were 10-12 blocks, but there are 14, so there are a few more to go, but progress is being made. 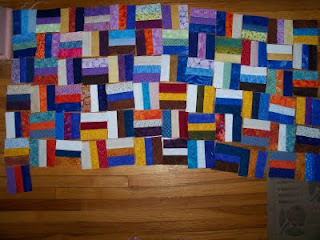 I also pressed my rail fence blocks I make as leaders and enders. Don't worry, I won't show them to you individually, but I did give you a group shot. I was just trying to see how many I had. I made some more after I pressed them that aren't in the picture. Maybe it needs some more multi-colored / novelty ones. 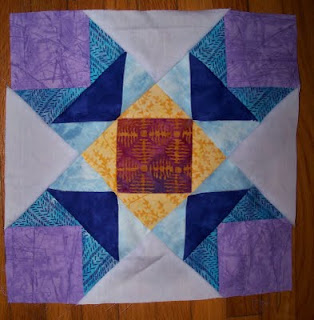 I think I got as much accomplished housework wise as I normally would, only the guilt didn't hit me until I was getting ready for bed. I really should have made a project of cleaning something - the basement, the garage or the office (tiny spare bedroom). All three of them get neglected for the more visible parts of the house.

Because Quiltfest was successful, I think I will continue it. I will dedicate some time for one of those rooms anyway, so that progress can be made in that direction as well.
Posted by Shasta Matova at 12:37 PM

So pretty! I just shut my eyes as I walk around the house - I'd MUCH rather sew, lol!

I just noticed that this is a Friday Block Party block. I cheated in that I combined the green squares into rectangles. I crashed the party without knowing I did!

Your rail fence is bright and cheerful. I was just noticing all the strings in my string box and the way they are overflowing... I may have to do something like this just to make box room!