With the days quickly slipping away, we wanted to go down the beautiful Amalfi coast and spend time at the beach, and recover from all our sightseeing.  We were planning to go to Rome on the following day. So this day was all about rest and relaxation.  We slept in, and took the bus south along the coastline.


There was a man sitting in the front seat who was telling everyone how to stamp their ticket, and telling them to go to the back, etc. He had a musty smelling sweater even though it was really hot. He was irritated when the bus driver told him to let me sit beside him, but he did eventually move his legs so I could get through. I guess I can thank him for saving me a front seat view. I thought he might be the Italian equivalent of a Walmart greeter, but when he got off the bus, I decided he was just a crotchety old man. My daughter wound up somewhere in the back.  I'm glad we had discussed where we were getting off before we got on the bus. We skipped Positano and went to Amalfi.


There were cliffs and a steep hill down to the water that the bus had to navigate. Lots of times he had to drive blind, because there was no way to tell if someone was coming from the other side. I think I figured out his code, honk once to say "anyone coming?", honk twice to say "Watch out, I'm coming through!"  There was only one place that had a light to make sure traffic only came from one direction at a time.  It must be manually operated, because there was a man standing there with his walkie-talkie beside it.The traffic light was on the ground, and someone passing the bus missed seeing it.   They somehow managed to work it out by the time the light turned green for us.


The lanes were very narrow, and yet people parked there to take photos of the view, etc. A lot of the drivers are tourists and don't know where the narrow spots are, and the locals are pushing the tourists to drive faster. Sometimes the bus driver had to drive backwards to let cars through, yes even around curves, but our driver drove carefully and only had to go backwards a short distance once. 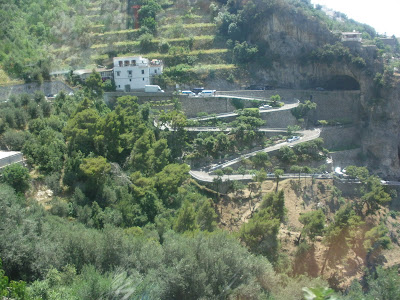 I was gearing myself to go down this road, but we didn't go there.  We got to the beach which has volcano rock instead of sand.  We got some lounge chairs and umbrella, got out our books and read.  I thought it was sweet when my daughter told me I should move my chair since the shade had moved, but she really wanted the sun since she was trying to get a tan.  We did get into the water which was very cold. I finally convinced her to go up to the shopping area.  An Italian souvenir grocery store had colorful beautifully shaped pasta, Italian spice mixes, candy, limoncello alcohol, and we wound up buying a lot of our little gifts for our family members here.

We could have gone to Positano as well, but my daughter told me that people generally go on vacations to simply relax and do nothing, and going to another town felt like doing something.  And since we had seen it on our way there, and we would see it on the way back, it didn't feel like we missed anything.
Posted by Shasta Matova at 5:43 PM